The Raphael Stora Archive I: A Missing Leaf of a Regensburg Antiphonary 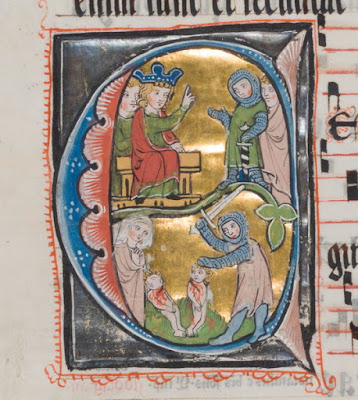 In a previous post about a dismembered illuminated Antiphonary from Regensburg, I showed that it had been auctioned intact in New York in 1945, and broken up by 1953 when four leaves, the property of the New York dealer Raphael Stora, were exhibited in the 1953-54 exhibition [discussed in this post] in Los Angeles. The detail above is from one of these four leaves.

From the 1945 auction catalogue we know that the manuscript had 20 historiated initials, of which I was able to trace the present whereabouts of most of them (or else photographs) in the non-French volume of the catalogue of the McCarthy Collection. One of the few leaves that eluded me -- and whose whereabouts I still do not know -- was described in the 1945 catalogue as: "Lycia and Saint Agatha, the Virgin martyr":

The strange spelling of "Lycia" appears to be a typo for "Lucia" (especially since "y" and "u" are next to each other on a typewriter keyboard).

This leaf is known to have belonged to the French-born art historian and curator of American collections, Philippe Verdier (1912-1993) [1]: the original sales invoice dated 8 July 1953 survives in the Stora Archive at the Getty Center, and the leaf was apparently still in Verdier's possession shortly before the 1987 Regensburger Buchmalerei exhibition, in the catalogue of which he is thanked [2].

In the intact volume this leaf appeared between those for the feasts of The Presentation in the Temple (2 February) and St Peter (22 February). Robert Sukale, who had information from Verdier, recorded the incipit as "D(um torqueretur)" [3], which proves that it introduced the feast of St Agatha.

As I had no more detailed description than the 1945 auction catalogue, and no photograph, I was unsure that the figure(s) had been identified correctly. In a footnote in the McCarthy catalogue, I over-ingeniously wrote:


"The Stora description suggests that the image represents both Agatha and Lucy, but the chant is for the feast of Agatha (5 February; Lucy’s feast-day is 13 December). There is perhaps confusion resulting from someone identifying the saint as Agatha or Lucy: Agatha is often depicted holding a dish with her severed breasts on it, while Lucy is similarly shown holding a dish with her eyes on it."

We now know that this suggestion was wrong, because the puzzle is solved.

The Stora Gallery archive of negatives is now at the Cloisters, New York, and has been digitized. Among the images are two of the Regensburg Antiphonary. One depicts The Massacre of the Innocents shown at the top of this page: 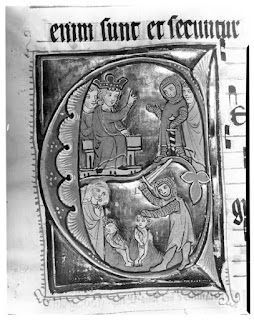 The other is the long-lost leaf with an initial depicting Sts Agatha and Lucy:
The portion of text visible in the photo is from the feast of Agatha:

We can now, at last, see why the 1945 cataloguer identified the first figure as "Lycia"; it was apparently not a typo, but deliberate (albeit based on the misreading of "V"/"U" for "Y"):

Notes
[1] Some biographical details can be found here.

[3] Robert Suckale, ‘The “Sweet Style” in Regensburg: An Addition to the Leaves from the Early Fourteenth-Century Antiphonary from the Dominican Convent of the Holy Cross', in Piecing Together the Picture: Fragments of German and Netherlandish Manuscripts in Houghton Library, Harvard Library Bulletin, 21 (2010), 45–52 at 49.