Another Look at the "Strozzi"-Jarman Book of Hours


In a previous post about illuminated leaves salvaged from a Book of Hours after the now-famous flood in 1846 that damaged manuscripts in the collection of John Boykett Jarman, I mistakenly conflated two leaves apparently from the same manuscript: one with a full-page miniature of the Crucifixion, and one with a historiated initial of the Crucifixion. I highlighted my error in an addendum, and noted that I would have to re-think and revise that blog-post.

I think I have now found a crucial new piece of evidence that allows the confusion to be sorted out.

I will summarise the "state of the question" and the problem at issue, followed by a possible solution.

Most have re-appeared since then in various auction and dealer catalogues. One of them, for example, a leaf with a historiated initial depicting King David playing the psaltery, was re-sold at Sotheby's, 18 June 1991, lot 44: 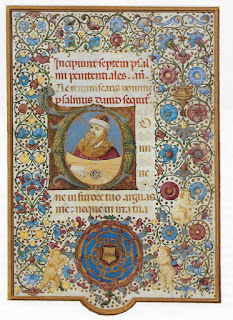 Based on the characteristic way in which the leaf was mounted on a sheet of modern gilt-edged vellum, it was suggested that it came from the collection of John Boykett Jarman (d. 1864), and thus that the seven leaves sold in 1966 were some of the ten ("5 large and 5 small") that formed lot 5 in the sale of Jarman's manuscripts at Sotheby's in 1864 [1]:

In my previous post, I suggested that a better match for the seven leaves was lot 51 in the same 1864 Jarman sale:

The description fits the 1966 leaves better because of the unusual number (7), the explicit mention that they were "mounted on vellum", and by the absence of lot 5's comment that the borders were "remarkable for the Boys introduced", as this does not seem like a particularly noteworthy feature of the decoration of the known leaves.

The big problem with my suggestion is that, in addition to the seven leaves sold in 1966, a leaf with a Crucifixion miniature was sold in 1970, said to be from the same manuscript:
If the identification of this leaf as coming from the same Book of Hours is correct, the total number of recorded leaves is eight, not seven.

In the recent catalogue of the manuscripts given to the Art Institute, Chicago, by Sandra Hindman [2], Christopher de Hamel accepted my suggestion that the seven miniatures sold in 1966 were Jarman lot 51, not lot 5, and left open the question of how to explain the extra Crucifixion miniature:


"Could it have a separate history since 1846 [when Jarman's collection was flooded] (it is possible), or was it, in fact, an unnoticed fake by Caleb Wing? Until it re-emerges, we will not know"

In the comments below my previous post, Cliff Webb kindly supplied biographical details of the Davis family, of which three members are known to have owned separate leaves:
Cliff also mentioned that part of the library of Stanley and Stuart's father, Henry Newnham Davis (d.1873), including some illuminated manuscripts, was sold at Sotheby's on 26-27 November 1900. I was recently reminded of this auction by the owner of the Virgin and Child leaf, and as luck would have it, I photographed the catalogue last year, so even in the current Covid-19 lock-down, I was able to check it:

In this catalogue, lot 198 is apparently, despite some odd features of the description, a pretty good match for our group of leaves, "A Collection of ten Leaves ... mounted in new vellum, in a vol. bound in velvet":

The description of the "very rich and elegant painted and illuminated borders of Candelabra and Cupids, Floreate Scrolls and Arabesques etc." could certainly describe our leaves: 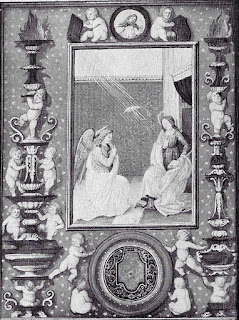 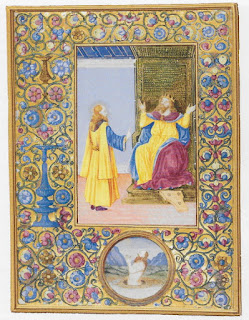 According to this 1900 description, there were five large miniatures and five leaves with "initial miniatures [i.e. historiated initials] on small circular subjects". The subjects of the large miniatures were:
It is this last-described miniature, "The Last Judgement", that provides the confirmation we need: 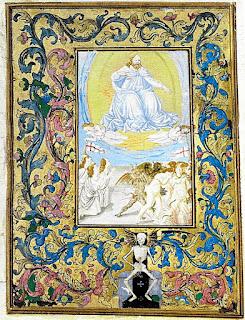 with the "figure of Death with wings and scythe below":

Thus I think we can be confident that de Hamel's original identification of lot 5 (not 51) in the Jarman sale was correct after all, before I misled him, and we can reconstruct the arrangement as a series of 10 leaves, five facing pairs, instead of the currently-known 7 or 8 leaves, as follows:


Images and individual provenances are provided on a separate Membra disiecta page.

At the auction in 1900, the (still bound) group of ten leaves was bought by "Brewer":

The price recorded in the auctioneer's book is £106, and I had trouble believing that this was not an error for £10 6s, until I found that £106 was the price reported in the following day's edition of The Times newspaper:

So where does all this leave our tracing of the provenance? de Hamel proposes a direct line of descent of the leaves through the Davis family, as follows:

This cannot be right. First, because I know of no evidence that William ever owned any of the leaves, and second, because there is concrete evidence that two of his brothers did.

What we now know is that Henry (the elder, d.1873) acquired the bound group of ten leaves following the Jarman sale, and it was still in his library at his death, remaining there until sold in 1900 to Brewer. The volume must have been re-acquired by a member of the family and broken-up into separate leaves by the time that his son Stuart lent two leaves to the Burlington Fine Arts Club exhibition in 1926-27. The fact that Stuart's twin brother Stanley also owned at least one leaf, suggests that at least two siblings divided the leaves between them: if five siblings each got two of the ten leaves, this might explain both (a) why Stuart lent only two to the Burlington Fine Arts Club exhibition, and (b) why another two are completely unrecorded since 1900.

In the title of this post I have put "Strozzi" in quote-marks because, as de Hamel points out in his recent essay: "no illumination that passed even at arm's length past Caleb Wing can necessarily be relied upon as unimproved, and the arms were not on the manuscript's opening miniature" (pp.141-42). It seems to me that there are enough "odd" features of many of the miniatures to suspect some fairly extensive interventions by Wing.

Whether or not the parent manuscript was made for a member of the Strozzi family, it would be interesting to know exactly who commissioned it: there must be an (autobiographical?) explanation for the choice of extremely unusual subject-matter, of Nathan rebuking David for his infidelity with Bathsheba and for having her husband Uriah killed.


Notes
[1] Sotheby, Wilkinson & Hodge, Catalogue of the Beautiful Collection of Illuminated Missals and Books of Hours, of Exquisite Quality, by Italian, French and Flemish Artists, Formed by the Late John Boykett Jarman, Esq. ... 13th Day of June, 1864, and Following Day. A scan is available on Gallica of Seymour de Ricci's copy of the catalogue, which he bequeathed to the BnF, annotated with prices and buyers' names, as well as comments copied from Sir Frederic Madden's copy at the BL (e.g. lot 26: "the arms of Philippe le Bon are modern"), and de Ricci's own notes on later owners (e.g. lot 29: "from Rev C H Crawford sale 20 Feb. 1854 n. 242"). I owe knowledge of this catalogue to the owner of the Virgin and Child leaf.

[2] Christopher de Hamel, with catalogue by Matthew J. Westerby, The Medieval World at Our Fingertips: Manuscript Illuminations from the Collection of Sandra Hindman, Studies in Medieval and Early Renaissance Art History (London and Turnhout, 2018), essay at pp. 134-43, and catalogue entry at pp. 244-45.

[3] If we take the nine children of Henry (the elder, d.1873) (two of whom I know of thanks to the owner of the Virgin & Child leaf), and their spouses and children (indented below), and arrange them in the order in which they died, we can see that if several siblings owned one or more leaves early in the 20th century, and if they each bequeathed their leaves to their surviving immediate family members, they would have eventually ended up in the hands of Stuart, and then Nathaniel:

I suspect that when we get the opportunity to re-examine the leaves (I know the present whereabouts of only three of them) we may find further clues to their provenances. We know, for example, that Stanley wrote his name on the back of one, and names may appear on the backs of others. The miniature of David and Nathan has a pencil letter "D" in the right margin, and in the lower right corner: perhaps the five full-page miniatures were lettered "A"-"E" in sequence?
Posted by Peter Kidd at 09:35