A Bible in Philadelphia [III]: The Bible of Cardinal Pedro Gómez de Barroso?

Something that I did not mention in the previous two blog posts, and is also not mentioned in any of the online descriptions of the Bible, is what appears to be a sort of itinerary, in a 14th-century hand:
At first I though that the three dates might be a record of someone's journey southwards in a single year, but the fact that the Roman numbers in the inscriptions progress from 56 to 58 to 64, while the dates go from May to August, then back to July, suggests that the dates are not from a single year, and the Roman numbers represent (the last digits of) different years. If so, the three dates and two legible place-names are:
I wondered if this might represent the career of a 14th-century cleric, as he was transferred from one church to the next?

A Bible in Philadelphia, With a Spanish(?) Provenance [II]

In the post two weeks ago, I traced the so-called Patou Bible (Philadelphia, Free Library, MS Lewis E 242) back through an 1877 auction catalogue to the Cistercian abbey at Loos, which owned it by the early 18th century, and discussed a 15th-century owner, Jean Patou. But I deliberately omitted the book's earlier provenance, which I'll begin to address today. 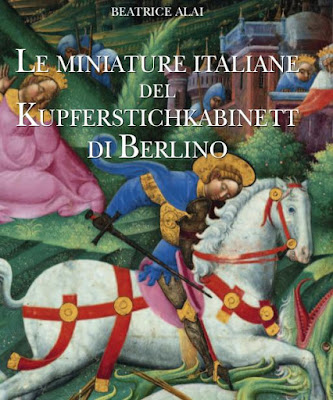 Hot on the heels of my last post, news of another new catalogue of cuttings and leaves, this time in the Berlin Kupferstichkabinett, and focusing on Italian illuminated items. 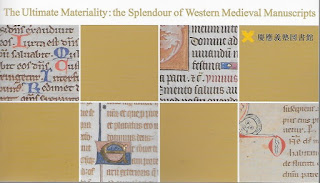 [The Patou Bible at the Free Library, Philadelphia, about which I blogged a week ago, turns out to be more complex and interesting than I had anticipated, so the next posts will have to wait a bit longer. In the meantime, readers may be interested to learn of a new publication.]

Thanks to Richard Linenthal I recently became aware of an exhibition of manuscripts belonging to Keio University, and thanks to the kindness of Takami Matsuda, I have a copy of the catalogue. A detail of the front cover, showing the English title, is above.

A Bible in Philadelphia, Attributed to the Grusch Atelier [I]

I have always struggled to understand the fundamental book about 13th-century Parisian illumination: Robert Branner, Manuscript Painting in Paris during the Reign of Saint Louis: A Study of Styles (University of California Press, 1977). 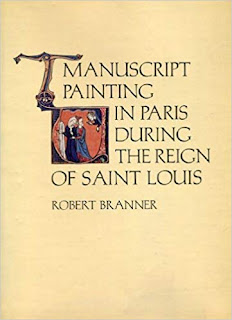 I have had to grapple with it again in earnest during the past couple of years, while cataloguing leaves in the McCarthy Collection, several of which have been attributed (wrongly, in my opinion) to artists and ateliers defined and named by Branner, including "The Dominican Painter", "The Leber Group", "The Atelier of the Vienna Moralized Bibles", and "The Johannes Grusch Atelier".

The latter atelier has been the subject of an extended exchange on Twitter this week, and in the course of trying to understand Branner's definition of the style(s), I went looking for digitized versions of the manuscripts he cites. One of them is a Bible at the Free Library, Philadelphia (MS Lewis E 242), recently digitized as part of the Bibliophilly project.