Almost three years ago I did a post about some Guglielmo Libri catalogues of manuscripts that were available online.

Ten days ago the 'Histoire de la Bibliophilie' blog had a long post about a much larger number of catalogues of manuscripts described and/or sold by him (although many of them do not include medieval manuscripts):

William Ablard and the Shaftesbury Psalter

In October 2012, when complete digitisation of the Shaftesbury Psalter (BL, Lansdowne MS 383) had been put online, the provenance included this:

I suspect that this was taken directly from the Catalogue of Illuminated Manuscripts:

Here is the inscription:


Anne Korteweg kindly emailed me about my most recent post, and with her permission I am sharing her observations (slightly edited):

An Unrecognised Book of Hours Made for Philip the Good [II]

In the previous post I suggested that a Book of Hours now at Smith College was written for Philip the Good. If he did indeed own it, it did not remain in the ducal collection for very long. There is an inscription that suggests another owner before the end of the 15th century.

On the back pastedown in a fine formal bâtarde script (also, significantly in the present context, known as lettre bourguignon) is an inscription that reads "C'est a moy Vaillant":
Looking for a person of this name with a connection to the Dukes of Burgundy, I find that Léon le Vaillant (d. 1520) was knighted by Charles the Bold (son of Philip the Good).

In a previous post I mentioned that ten medieval manuscripts belonging to Smith College have been put online via Digital Scriptorium; they include one that I did not see when I visited the College a year ago.

Skimming through the Digital Scriptorium images this summer my interest was piqued by MS 288, a Book of Hours whose first text (after the calendar) has a rubric which mentions the Duke of Burgundy and provides the scribe's name, Dominic of Burgundy:

Another Leaf from the Buckland Missal

In a previous post I mentioned that I have an interest in manuscripts from the Throckmorton library. This interest dates from the late 1990s, when I catalogued the Bodleian Library's Buckland Missal (MS. Don. b. 5; description below), which they had owned, and included a selection of images of it on what was, at the time, a fairly early example of a considerable body of digitized manuscript images online. You may, without being aware of it, be familiar with the Missal's only remaining historiated initial: it depicts the blessing of salt and water, and is used on the homepage of Chadwyck Healey's Patrologia Latina: 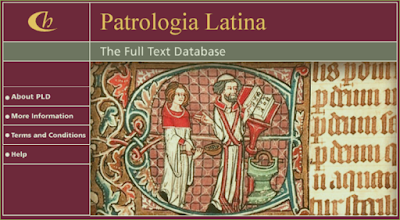 The volume has had an interesting history, and its provenance can be traced in part from inscriptions added to the calendar, including the dedication of the church at Buckland, from which it takes its name: