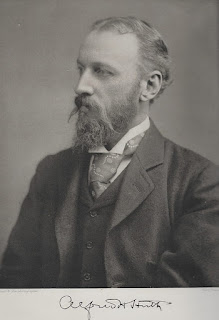 Following my blog post about Henry Huth, Ian Jackson contacted me with the following amusing note about his son Alfred (shown above), which I share with his permission:


"The younger Huth is also worthy of attention. He wanted to marry his cousin, but his (or their) parents forbade it on grounds of consanguinity. He then spent several years studying the subject, producing not only a thin (but pioneering) bibliography on the marriage of near kin, but a fat book on its history and anthropology, abundantly documented as only a bookworm could.

His conclusion was that the only form of incest generally condemned around the globe was between parties of vastly different age. The family realized that they're been let off lightly, and consented to the marriage. It's the most heartwarming story of applied bibliography I know."


Here are some of Alfred Huth's publications: