An Anonymous Auction in Paris in 1934

In a previous blogpost about "Another Hachette-Lehman-Yale Cutting" (here) I referred to the catalogue of an auction held in Paris in 1934, to which I did not have access at that time. I have now seen a copy, and it adds to the group of cuttings discussed in that blogpost.

The Office of the Dead and the Iken Psalter 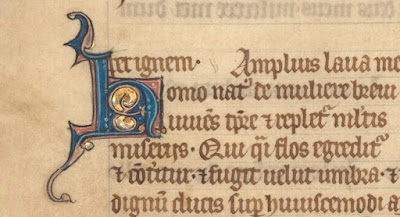 The Office of the Dead is a text whose overall format is pretty consistent, but whose details vary significantly, according to different liturgical "Uses". The Office can be found in several types of liturgical and devotional manuscripts, often appearing at or near the end of a Psalter, for example, and it is a standard feature of Books of Hours. It can be particularly helpful in establishing where a book was made (or at least where it was intended to be used) when the Hours of the Virgin are missing, incomplete, or correspond to a very widespread Use such as the Use of Paris or Rome. One might find, for example, a Book of Hours illuminated by Parisian artists, with a Parisian Use for the Hours of the Virgin, but an Office of the Dead for the Use of Troyes: a sure clue to the area where the patron lived.

The Source of the Composition of a Fake Drawing 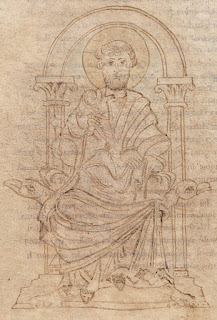 I am helping to catalogue the collection of leaves and fragments owned by the late Marvin Colker, which will be sold at Christie's in about a month's time. The collection contains lots of interest, and I have at least one more blogpost in preparation about items from it. Today I provide a very brief one, concerning the drawing above.