The Minor Initials of the Murano Gradual

The only extensive list of the minor initials of the Murano Gradual is that published very recently by Azzarello & Keene [1]. But this list is very incomplete, contains a number of errors, does not provide references to reproductions, and sometimes lists the cuttings of a collection in no discernable order, so it seems worthwhile to provide a more complete and systematic list here. No doubt it will need further additons, corrections, and revisions in due course.

Some initials are cropped (i) very close to the edge of the illumination following their irregular shape,  some (ii) follow the outline of the initial but allow a narrow border of parchment, while others (iii) are simple rectangles and preserve more of the surrounding parchment: 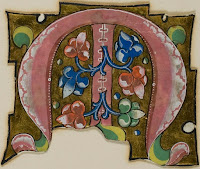 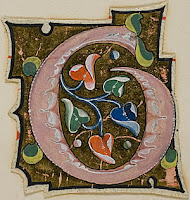 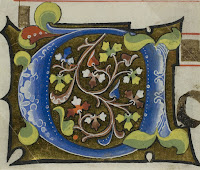 For many of the initials listed below we provide details of an online or printed reproduction; here are three of the unpublished inhabited initials:

The V&A Museum's call-numbers for manuscripts can be confusing. Each item has an official accession number; these are the numbers the V&A uses on its own online catalogue, and which I use above. They take various forms; some are simple four-digit numbers, e.g. "2875", and a significant quantity which belonged to the historic Circulating Collection have a "Circ." prefix and an accession-year suffix, e.g. "Circ. 133.1919".

For the purposes of a pair of 1908 catalogues of the V&A cuttings and leaves (by Edward F. Strange, based on the attributions of Sydney Cockerell) [4], which was arranged according to the perceived style and date, "MS." numbers were invented; thus Netherlandish illuminations were numbered as MS. 1–409, English ones MSS. 661–687, French ones MSS. 688–859, and so on; the Murano cuttings were among 58 initials numbered MS. 1048–1105. But these "MS." numbers were dropped by the time the second edition of the catalogue was published in 1923. The first entry in both catalogues, for example, is a set of 8 leaves from a 14th-century Dominican Antiphonary: in the 1908 catalogue they are MS. 1-8, while in the 1923 catalogue they are 8997A-H. In other words, the numbers introduced in 1908 and abandoned by 1923, but used by Azzarello and Keene, are obsolete.

[1] Stephanie Azzarello and Bryan C. Keene, ‘Splendors of the Serenissima in a Digital Age: The Master of the Murano Gradual Reconsidered’, Manuscript Studies: A Journal of the Schoenberg Institute for Manuscript Studies, 6.2 (2021), 223–67, at 266-67.

[2] The Tregaskis catalogue crops its image of the initial B to its edges, but as the image at the top of this page shows, this is misleading:

[3] The catalogue reproduces six of the seven initials that comprosed lots 77 and 78: 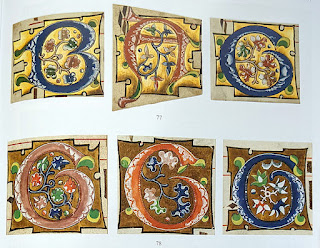