The Tongerlo Apocalypse in the 16th and 17th Centuries


Hanna Vorholt spent time at Tongerlo in 2004 in connection with her thesis work on their manuscript of Lambert of Saint-Omer's Liber Floridus (recently published), and following her visit she kindly gave me copies of her digital images of the handwritten catalogues of 1625, 1640, and 1707.

The 1625 catalogue has a decorative title-page:
and because the contents are arranged alphabetically by author within each section, it is not hard to find the Apocalypse:

The "1640" catalogue (I am not sure if this is the original or a copy) similarly presents no problems:

This 1640 catalogue is the one published in 1644 by Sanderus, in his Bibliotheca Belgica manuscripta: 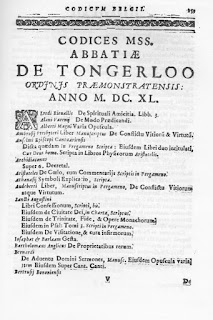 I could not locate the Apocalypse in Hanna's images of the 1707 catalogue, so I contacted Kees van Heijst at the Tongerlo Archive, who in turn referred my enquiry to Pierre Delsaerdt at the University of Antwerp. Each of them were very helpful but could not find the manuscript in the 1707 catalogue, either -- but this may simply be because it is incomplete.

The library of Tongerlo was dispersed in the 1820s, mainly in an auction at Antwerp in 1825, and I hoped that the Apocalypse would be easy to identify in the sale catalogue. I do not have access to a copy of this rare publication, so again I have Kees van Heijst and Pierre Delsaerdt to thank for checking it, but again they were unable to find the Apocalypse listed. As one of the library's most valuable manuscripts it was presumably sold separately.

I was going to post this blog last weekend, but I decided to wait a bit longer, because there was one more Tongerlo library catalogue to check, dating from the 16th century, now at the Royal Library, Brussels (MS 8242-43), and Dominique Vanwijnsberghe had very kindly agreed to look at it for me on Tuesday.

I did not have very high expectations, but on Tuesday evening he sent me his images, which include a list of books drawn up on 18 June 1543:

So, thanks to Dominique and Hanna, we have successfully traced the provenance of the manuscript at Tongerlo Abbey back to the first half of the 16th century, and can prove that it was still there a century later. Even though it does not seem to be included in the surviving part of the 1707 catalogue, the Apocalypse was surely still there in the 18th century, when it was rebound with the Abbey's arms on the spine (see previous post), and was probably there until the late 18th or early 19th century, when most of the library was dispersed.

As for the later 19th-century provenance of the volume, I have now checked the British Library's copies of Joseph Lilly catalogues for 1860-62, and not been able to identify it. But this is not surprising: when Lilly acquired the book he doubtless offered it directly to his best customer, Henry Huth, rather than advertising it for sale in a catalogue.


EDIT, 18 June 2018
Anne Korteweg reminds me that the Abbey's properties were seized by the French in 1796, and so it is quite possible that the Apocalypse left Tongerlo well before the auction in 1825.
Posted by Peter Kidd at 22:37 No comments:

The image above comes from a manuscript Apocalypse, fully digitised on the British Library website, and soon to be published as a hardcopy facsimile. I have recently been asked to contribute to the facsimile commentary a short section about the book's provenance.