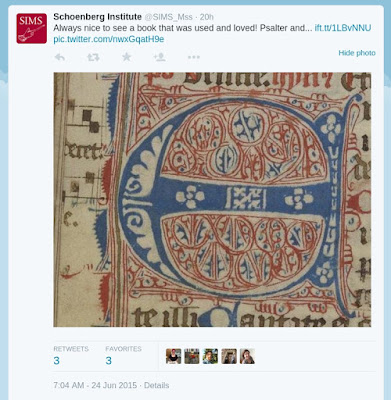 I was recently asked on Twitter about the curious decoration in a few images of a Ferial Psalter at Penn (MS. Codex 655), which had been catalogued when it was acquired in 1965 as 14th-century, and French.

The style of decoration looked unusual, and I didn't know what to say, so I looked at more images, available at SIMS. 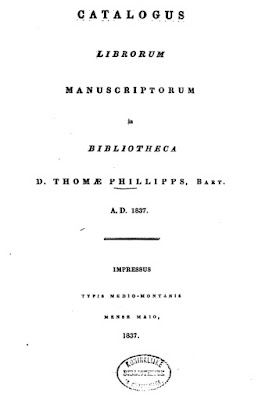 I have a copy of the Orskey-Johnson reprint (2001) of the Phillipps catalogue. In the introduction A.N.L. Munby states that he knows of only about fifteen complete, or substantially complete, copies of the catalogue, of which only seven are available for consultation in public institutions, at the BL, London; Bodleian, Oxford; UL, Cambridge; BnF, Paris; KB, The Hague; Harvard, Cambridge (MA); and Newberry, Chicago. The reprint is a copy of one formerly owned by David Lew Feldman, New York.

[Any reader who does not know what an extraordinary book the Phillipps catalogue is, should consult the first volume of Munby's Phillipps Studies (1951), or this very brief summary]

In connection with an enquiry from a reader a couple of days ago I tried Googling a phrase from the catalogue, hoping that it might lead me to the present whereabouts of one of the manuscripts, but it took me instead to an online copy of the catalogue itself, of which I was unaware.

I recently taught a two-day course on 'Codicology and Cataloguing' at the London International Palaeography Summer School (as a change to my usual one-day Introduction to Provenance Research). As part of the course I had the students examine a fine Netherlandish Bible, MS 292 in the Senate House Library collection; it was described by Ker in MMBL, I, pp.367–8, who did not have much to say about the provenance:

but some gaps can be filled thanks to catalogues now available online.

Looking through the Dreweatt-Bloomsbury catalogue mentioned in a previous post, I noticed a reproduction of leaf of an English Book of Hours (lot 23) that I recognise: 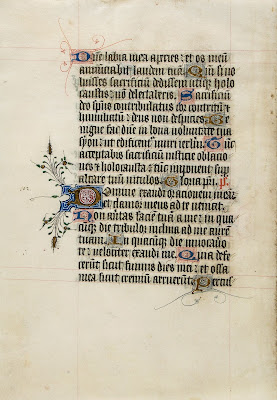 Miniatures From a Franciscan Prayerbook?

After a hiatus of a few weeks I have re-commenced blogging; my last couple of posts have been about items in the forthcoming London July auction sales of medieval manuscripts. There will be more to come.

Regular readers will know that I enjoy virtually reuniting separated cuttings, leaves, and volumes, of dispersed manuscripts. Just now I had one of those "Aha!" moments when I recognised such a connection.

The first miniature below will be Sotheby's, 7 July 2915, lot 56, and the other one was acquired by the Philadelphia Museum of Art in 1958. 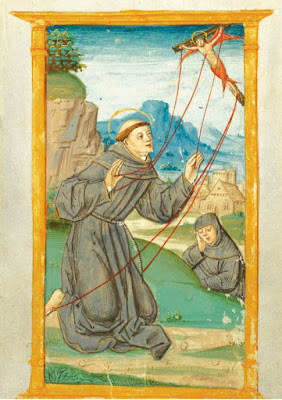 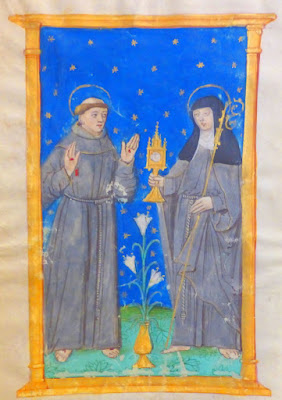 The different lighting conditions, etc., of the photographs make them appear superficially rather different, but the style appears to be the same, as do the dimensions: the Sotheby's catalogue reports its leaf to be 164×102mm, while the Philly one is reported to be 165×100mm (perhaps rounded to the nearest 5mm).

If the parent manuscript had only one image of St Francis, one would assume the image originally faced a suffrage to the saint in a Book of Hours (the Sotheby's description is careful to say "probably", not certainly, from a Book of Hours), but as he apparently appeared twice, the second time with St Clare, one of his first followers, this suggests not only that the book had a strong Franciscan element, but also that it may have been some sort of prayerbook, rather than a standard Book of Hours.

In a previous post I discussed a fascinating Psalter-Hours whose origin in uncertain. A leaf with five historiated initials is among the offerings in Sotheby's July medieval manuscripts sale: 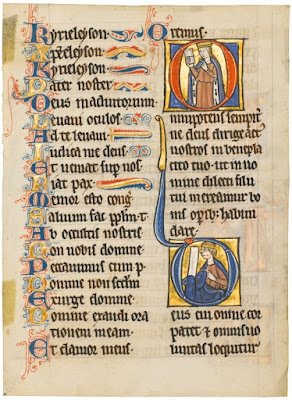 A Leaf from the Sigmaringen Psalter Re-Emerges


The catalogue of the forthcoming Sotheby's summer sale of medieval and renaissance manuscripts (available online) includes, as lot 16, a leaf with a miniature in two compartments that I discussed in a previous post:
The zoomable online image allows one to study details of the wonderful painting as never before: 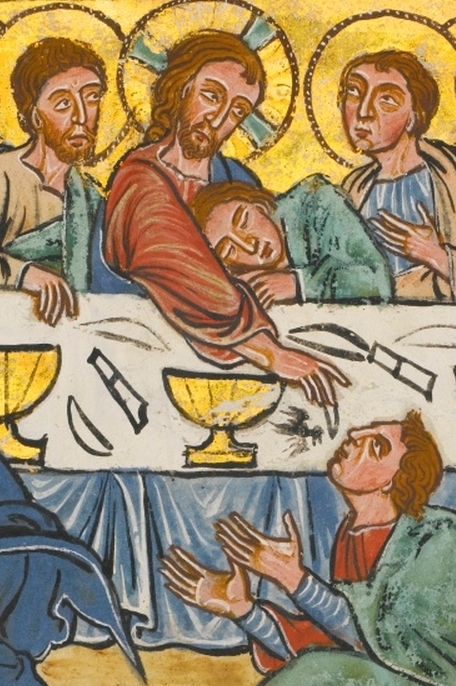