I recently taught a two-day course on 'Codicology and Cataloguing' at the London International Palaeography Summer School (as a change to my usual one-day Introduction to Provenance Research). As part of the course I had the students examine a fine Netherlandish Bible, MS 292 in the Senate House Library collection; it was described by Ker in MMBL, I, pp.367–8, who did not have much to say about the provenance:

but some gaps can be filled thanks to catalogues now available online.

The first of the 'bookplates' described by Ker look like this: 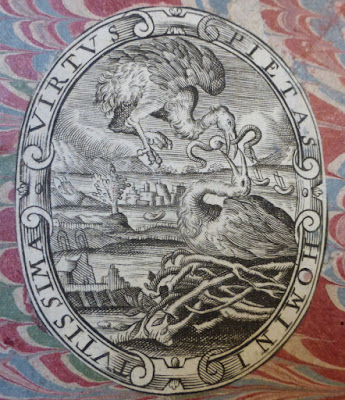 This 'bookplate' was the subject of a blogpost last year by Laura Aydelotte of the Provenance Online Project, where it is tentatively attributed to Jan Baptiste Verdussen II (1659–1759), member of a family of Antwerp printers, and where it is explained that this is in fact the printer's device, here re-purposed to serve as a bookplate. 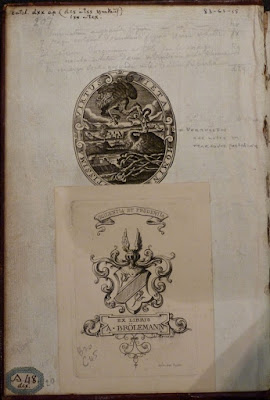 In the Christie's catalogue description, it is attributed to Jean-Baptiste Verdussen III (1698–1773).

The latter's library was sold at Antwerp in 1776, after his death, and we are fortunate that the Bodleian copy of the catalogue, annotated with prices and buyers' names, is available online through Google Books: 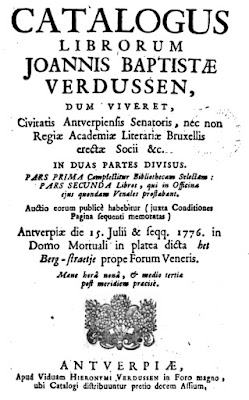 which, according to the annotations, was bought by "Gasparoli": 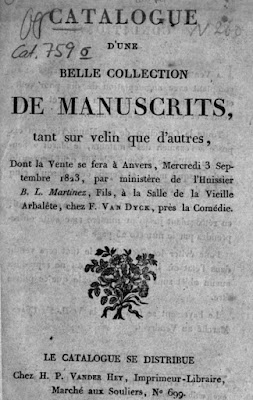 in which the Bible is again lot 3: 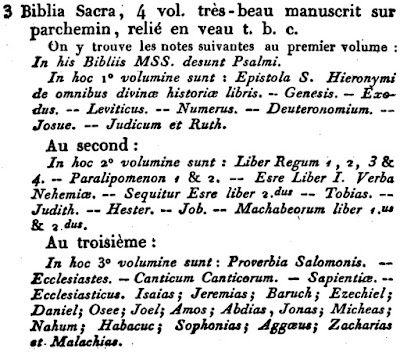 The notes transcribed from each volume are found on the front flyleaves, very probably written by Verdussen; here, for example, is the note in vol.II: 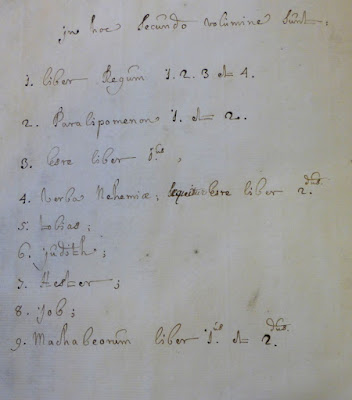 Unfortunately I do not know of an annotated copy of this catalogue, so I do not know who the next owner was, but it will doubtless be possible to find out, in due course.


[Edit, 22 June 2015:] Pieter Beullens, of the KU, Leuven, kindly informs me that there are two copies of the Gasparoli auction in the Antwerp City Library, which are, according to the catalogue, annotated with names and prices.
Posted by Peter Kidd at 09:23