For any readers who will be in France in April and who have not already heard about it, I thought it would be worth bringing to their attention a seminar that will take place in Lyon on 3 April, about the Study of Provenance in Heritage Collections of French Libraries.

Here is the programme:

Another Cutting by the Master of the Brussels Initials 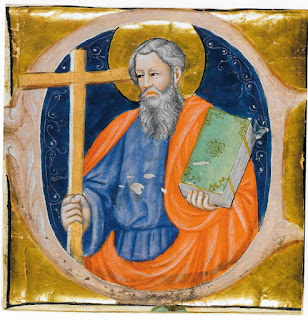 Here's another cutting to add to those listed in a previous blogpost, here. It is Cambridge, Fitzwilliam Museum, MS McClean 201.13g, and its associaton with the other published cuttings is duly noted in Morgan, Panayotova, and Reynolds, Illuminated Manuscripts in Cambridge, I (2011), no. 188.

I have had an interest for a long time in Alphonse Labitte (see, for example, the blog post here). In 1890, he founded the Société des Miniaturistes et Enlumineurs de France, and I assume it was a sort of club, perhaps a bit like the Burlington Fine Arts Club, with a regular meeting-room and its own library (to which, I guess, members were encouraged to make donations): in his various publications he often reproduces manuscripts in the "Bibliothèque ed l'enlumineur". Or perhaps he referred to his own personal library as if it belonged to the club; I have found at least 22 medieval manuscripts that bear his bookplate. But until now, I have not been able to match up any of the manuscripts he reproduced with manuscripts whose present whereabouts I know.

The exception is a miniature now at Columbia University, shown above.