Two New Cuttings Illuminated by the Master of the Brussels Initials

Christie's forthcoming "online only" sale of leaves and cuttings includes an unrecorded cutting from a Gradual (above) illuminated by an artist in whom I've had an interest for many years: the so-called Master of the Brussels Initials.
The illuminator is very curious from a connoisseurship point of view, because of the way his style changed during his career: there is a very Bolognese late 14th-century style, clearly following that of Niccolò da Bologna; there is a modified style when he worked in Paris, c.1400, on such manuscripts as the Brussels Hours of the Duke de Berry from which he takes his name  [1]; and there is a third style, represented by several manuscripts including the present Gradual cuttings and a manuscript written in Bologna in 1408. It is therefore assumed that he trained and worked in Bologna; moved to Paris around 1400; and returned from Paris to his home-town between about 1405 and 1408.

The seven previously-known Gradual cuttings were listed by Pia Palladino in her Treasures of a Lost Art exhibition catalogue, no. 34 [2]: 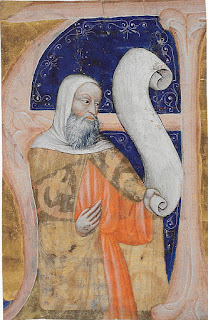 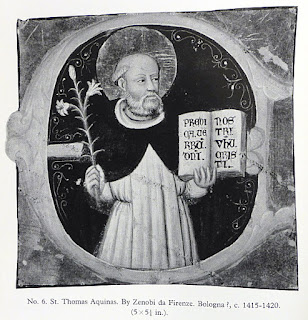 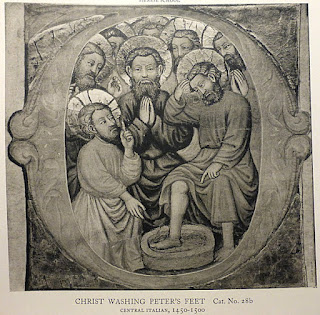 Christ Blessing. Initial "E". Formerly in the Lehman Collection at The Met, subsequently with Jörn Günther (Brochure 9, 2006, no. 26): 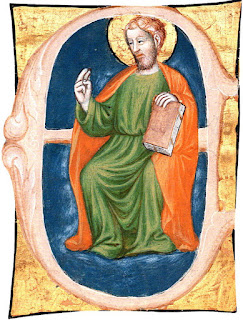 Palladino records that the text on the back is " ...uruabitur/ ...bitur om[ne]s": it is therefore doubtless  chant for for the Third Sunday in Advent, laid out approximately as follows:

If this is correct, then the initial "E" itself, depicting Christ surrounded by cloud-like white on a blue sky-like background, probably introduced the chant "Ecce apparebit dominus super nubem candidam ...", the first response at Matins for the Third Sunday in Advent. 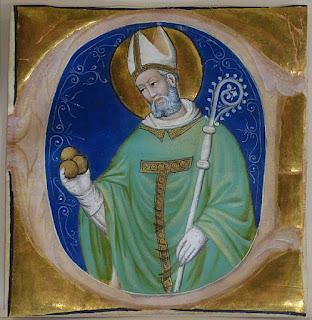 The reverse has a fragment of text "vehi sa" followed by a versicle beginning "Erat": 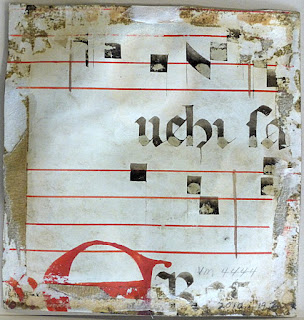 so the initial doubtless comes from:


To the seven previously-known cuttings, and the eighth now at Christie's, I can add one more: 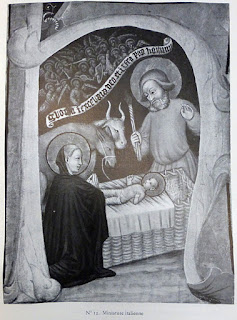 The cuttings with identifiable feasts therefore include a clutch from November and December: [3]


but others come from Holy Week (the Christ Washing the Apostles' Feet) and August (St Dominic). 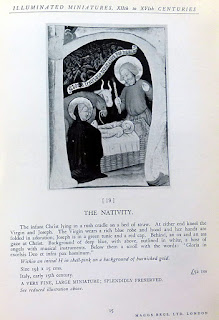 [2] This is now available to download free from here.

[3] I also suspect that the Cini initial "A" may be the First Sunday in Advent, "Ad te levavi", as it is larger than at least some of the others. The recent Cini exhibition catalogue states that the back of the cutting has text in brown ink in gothic script, and music in square notation on four-line red staves,  but unhelpfully states that "il ritaglio non permette l'individuazione del testo a cui l'iniziale era a capo", without recording what the visible text is!