Two More Leaves of the MdM and AdM Hours 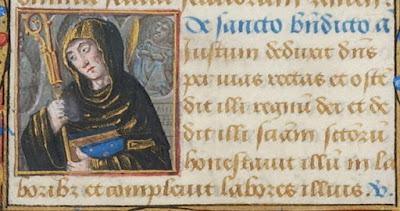 In May I wrote a blogpost about two leaves from a Book of Hours which has the initials "MdM" and "AdM" -- presumably of its husband and wife owners -- in the borders; they are at Montreal and Rochester, NY. By chance I found another leaf from the same manuscript while in the US in July, in Toledo, Ohio, and wrote another blogpost about them after my return. In the second of these posts I reproduced a page from a 1923 Maggs Bros catalogue, in which four leaves of the manuscript are described, including the Toledo one.
I have now found two more leaves, at least one of which is described in the Maggs catalogue. The two new leaves do not have the telltale initials "MdM" and "AdM" in their borders, but I am confident -- based on the style of script and decoration, and the number of lines per page -- that they come from the same manuscript.
Read more »
Posted by Peter Kidd at 09:16 1 comment:

A New Leaf of the Quadripartite Miniatures Series (Paris, c.1340) 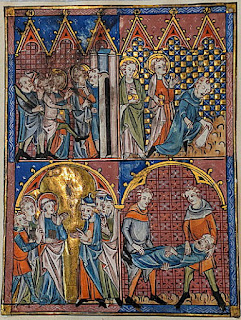 Perhaps the most exciting discovery of my summer trip to various collections in NY, OH, and Toronto was a wealth of unknown or little-known material at the Royal Ontario Museum. Among many interesting illuminated cuttings and text leaves is the quadripartite miniature shown above, a previously unrecognised member of a group of miniatures now scattered between private and institutional collections including the Lilly, Bodleian, and British Libraries, Fitzwilliam Museum, and Art Institute of Chicago. 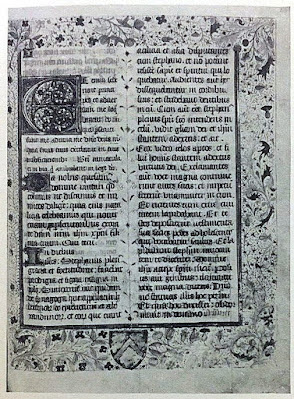 Another Leaf of the Arrivabene Eusebius 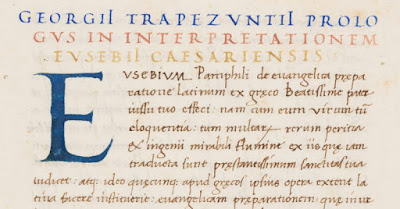 Thanks to the kindness of Steven Galbraith of the Rochester Institute of Technology, I have just received images of some of the leaves I was unable to see in person while in Rochester this summer. They have all sorts of interesting items, but one in particular caught my attention, a detail of which is shown above.

A few years ago wrote a blogpost about "An Unnoticed Arrivabene Leaf at the Newberry Library" (here); it concerns one of two leaves formerly owned by Ernst F. Detterer (1888-1947) of Chicago, friend of Otto Ege, and now at the Newberry. I was unable to locate the second leaf, but I think it must be the one now at Rochester.