An Unnoticed Arrivabene Leaf at the Newberry Library

In May last year I visited the Newberry Library and spent a stimulating morning looking at leaves and cuttings (one of which I subsequently discussed here). One of the finest I saw is a large paper 15th-century Italian Humanistic leaf, with an illuminated bianchi girari initial, shown above. As the heading tells us, this initial "C" introduces Eusebius of Caesaria's De praeparatione evangelica, Book I [Wikipedia].

The heading is written in very elegant epigraphic capitals, in lines of blue, red, olive green, and dark purple inks. These colours, alternating in this order, are characteristic of the famous Paduan scribe Bartolomeo Sanvito (also discussed in this blogpost).

Here is an example of a heading by Sanvito, using the same colours in the same sequence, but with the addition of lines of gold (another of his favoured colour-sequences):
Sanvito's coloured capitals were so admired by contemporaries that he was often commissioned to add them to books whose main text was written by other scribes, and so although the main text of the Newberry leaf did not look to me like his hand, I wondered if the heading in epigraphic capitals might be by him.

Perhaps the two features of the Newberry heading that stand out as most idiosyncratic to the casual viewer are the exceptionally tall letter "I"s in the first and last lines, and the "A" at the very end of the second line, slightly raised above the curve of the preceding "R":

Each feature is found individually many times in headings written by Sanvito, and they are often found together, as in these two examples, in which the coloured letters of each line alternate with gold ones: 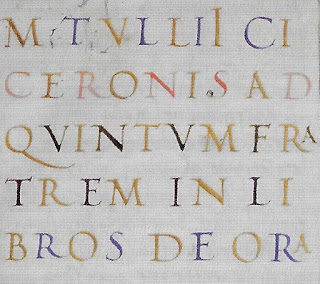 I  sent a snap of the Newberry capitals to Laura Nuvoloni, the authority on Sanvito. She replied with her characteristic scholarly caution, suggesting that instead of Sanvito himself, the heading might be by a close imitator, such as the one who supplied the heading in this manuscript: 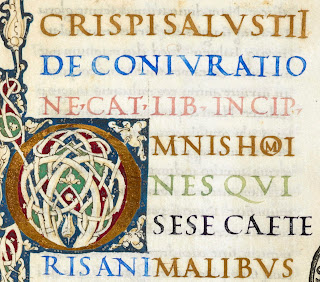 Almost as an afterthought, I sent a second message to Laura, including an image of the lower half of the page, "in case you recognise the heraldry": 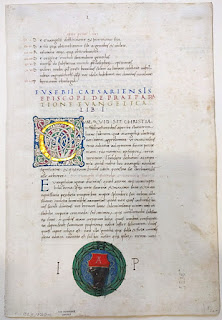 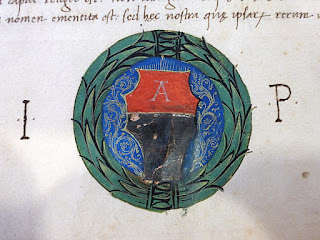 
"Giovan Pietro Arrivabene!  As you know [I didn't!], Arrivabene did have MSS produced or rubricated by B.S. either for him or for Cardinal Gonzaga."

(The "A" in the arms is for Arrivabene, and the initials "I P" to either side are for Iohannes Petrus, i.e. Giovan Pietro).

Sanvito (d. 1511) and Arrivabene (d. 1504) were both members of the household of Cardinal Francesco Gonzaga (d. 1483) and "numerous manuscripts made by or for Arrivabene have rubrication in Sanvito's coloured epigraphic capitals" [1]. 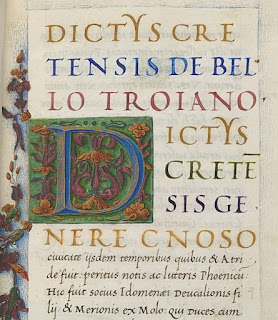 Having got this far, I hoped it might be possible to identify the parent volume of the Newberry leaf. It is in very good condition, and does not look as if it has been framed or exposed to light for very long, which increases the likelihood that it was removed from the volume no earlier than the 20th century. The text is reasonably uncommon (de Ricci's Census and its Supplement record only two codices in the whole of North America, for example), and so I hoped that it might be possible to identify it in the Schoenberg database, but my attempt was inconclusive.

What about other provenance? The Newberry Library catalogue description [2] tells us that the leaf came from the collection of Ernst F. Detterer (1888-1947) of Chicago [Wikipedia; he features in an earlier blogpost here], and is it recorded in his possession in de Ricci's Census (vol. I, 1935, p. 603):

From this we learn not only that it was obtained from the New York dealer Ernst Weyhe (1882–1972), by 1935, but that Detterer owned another leaf from the same manuscript.

Where is the other leaf now? Detterer's loose leaves were dispersed after his death [3], but as far as I can tell, the other leaf of the Eusebius is not among the Detterer leaves at the Newberry Library; the Art Institute, Chicago; or the Lilly Library.

There is a curious discrepancy, however. Suzanne Karr Schmidt of the Newberry has kindly looked in the files for me, and found that the Arrivabene leaf (just one, not two) appears in an undated Brentano's catalogue of Original Leaves from Medieval Manuscripts and Incunabula: 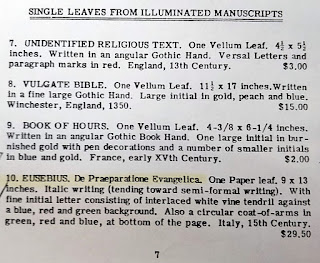 In the Brentano catalogue it is priced $29.50, and yet the leaf itself seems to be priced "$50" in the lower right corner of the recto: 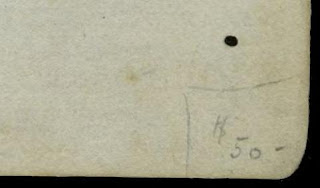 Perhaps Weyhe bought it from Brentano and then sold it to Detterer?

Detterer was a  calligrapher, teacher, and typographer who spent the last part of his career as Curator of the John M. Wing Collection on Printing and the History of the Book at the Newberry’s Library. It is pleasingly appropriate in the present context, that he is perhaps mainly remembered today as the designer of two typefaces. He designed one of them specifically for the Newberry Library, for use on bookbindings, consisting only of elegant epigraphic capitals:
The other was called "Nicolas Jenson", later renamed "Eusebius", because it was inspired by Nicolas Jenson's 1470 edition of Eusebius's De praeparatione evangelica -- precisely the text that is represented by the Newberry Library's Arrivabene manuscript leaf.

EDIT, 25 August 2019
I think I now understand the apparent discrepancy mentioned above. After Detterer's death in 1947 his manuscripts seem to have been acquired by the Chicago branch of Brentano's bookstore [Wikipedia]. Most were offered in their Catalogue 119: Illuminated Manuscripts, Incunabula, Typography, and Fine Printing, Including Selections from the Library of Ernst F. Detterer, Custodian of the John. V. Wing Collection, Newberry Library, 1931-1947 [undated; presumably 1947 or 1948]. Brentano's Catalogue 121 or Catalogue 122 (sources disagree, and I have not been able to consult a copy of either), no. 10 is the Arrivabene Eusebius leaf (this is the catalogue of which I show a reproduction above). The chain or provenance of the Eusebius leaf thus seems to be:

EDIT, 8 September 2019
Suzanne Karr Schmidt of the Newberry has kindly consulted for me the Library's copy of Brentano Catalogue 119. Although it contains manuscripts from Detterer's collection, it appears not to include any single leaves. It is still not yet clear if the Arrivabene leaf was offered in their Catalogue 121, 122, or both.

[2] The group of 14 leaves, of which the present one forms a part, are described briefly here, and digitised here.

[3] de Ricci (pp. 604-5, nos. 31, 34, and 39), records that Detterer owned 2 leaves of a copy of Jacobus de Voragine's Legenda aurea, 4 leaves of an Italian translation of Livy, and 29 leaves of a copy of Prosper's De vita activa et contemplativa, yet only one leaf of each is now at the Newberry Library.
Posted by Peter Kidd at 08:54