In his 2013 study of Otto Ege's medieval manuscripts (reviewed here), Scott Gwara has discussed an incomplete 15th-century Italian Book of Hours that was apparently his very first, bought in 1911. He has traced 5 single leaves and 11 bifolia in 7 different collections.[1]

In his infamous article, "I am a Biblioclast", Ege relates how he bought the manuscript for $175, bidding against Rosenbach at a Stan V. Henkels auction in Philadelphia, and how he subsequently "allowed a well-known Chicago collector (who shall be nameless) to tempt him to divide the book with him".[2] This anonymous Chicago collector is identifiable as Ernst F. Detterer (1888-1947), because at least 28 leaves of the same manuscript were later in his possession, and he knew "Other leaves belong to Otto F. Ege, Cleveland; the ms. was in a Philadelphia sale".[3]

To the 27 leaves in 7 collections known to Gwara we can now add four more leaves and one more collection: Chicago, Art Institute, Inv.no.1917.235.1-4, given by Detterer in 1917:
The script and the cusped field of the illuminated initial on the leaf above can be compared, for example, to this leaf at the University of Colorado at Boulder:

One peculiarity of the scribe (or his exemplar) is his habit of spelling words with an "f" where a "ph" would be normal. Here, for example is a rubric "Antifana" [sic]:
which can be matched in at least one leaf at Boulder:
and the habit also extends to other words and names, including "Stefane" in the litany of saints:

It is not surprising that Detterer should have given the leaves to the Art Institute: after graduating in the same class as Ege from the Pennsylvania Museum and School of Industrial Art on 1 June 1911, he taught from 1912 to 1921 at the Chicago Normal School, and from 1921 to 1931 at the School of the Art Institute of Chicago. If Ege had sold him his portion at cost-price, and the volume bought in Philadelphia for $175 had at least 175 leaves, as seems likely, the leaves would have cost him less than $1 each.

As Avocations is not an easy journal to find in libraries, it may be worth reproducing here, in full, Ege's account of his first manuscript purchase, and his 'first book "crime"', as he calls it: 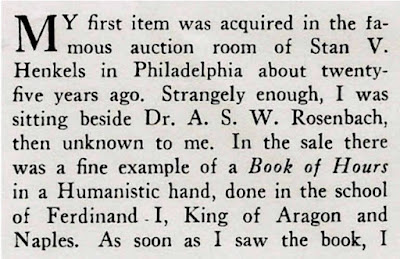 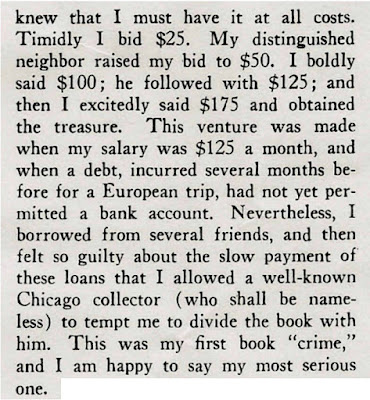