As mentioned in the previous post, much of my earliest research on illuminated manuscripts concerned 13th-century English Psalters, and although I have not published much on the subject, I have always maintained an interest in them. I was therefore glad, several years ago, to be able to spend some time examining the so-called Whitby Psalter at the Houghton Library (of which an image is shown above).[1]

The Psalter is now very incomplete: the Houghton has a bound portion of just 28 leaves, but in the past several years I have found several more, and have long intended to do a blogpost. I found another recently, and this has spurred me into action.[2] 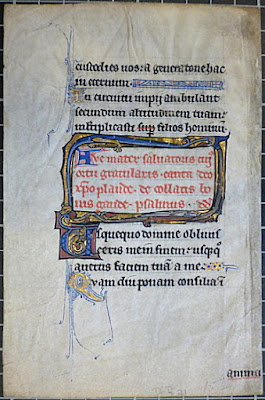 Many years ago, I worked on a group of early 13th-century English Psalters, some of which include a  hymn or series of prayers to the Virgin in which each stanza starts with the word "Ave". So I took special notice when, in 2014, I encountered at the Philadelphia Museum of Art a leaf from a later 13th-century (c.1270) Franco-Flemish example, with the "Ave" stanza before each Psalm, curiously enframed in illuminated ornament, as in the image above.

The Antiphonal of Berardo da Teramo in 1924 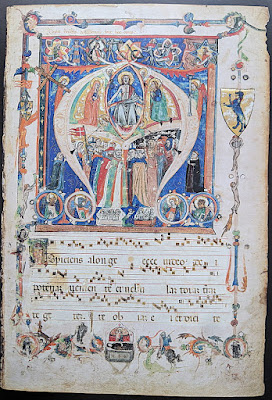 When I was in New York at Christmas I spent some time at the Watson Library in the Metropolitan Museum of Art, mainly looking at the part of the Robert Lehman Archive pertaining to his illuminations. I'll be doing a separate post about it in due course, because it tells us a lot about when and where he acquired them, and explains the weird numbering of items that appears in de Ricci's Census.

Today I'll just highlight one provenance discovery that came out of this work, relating to the Antiphonary of Berardo da Teramo (of which an image is shown above), one of the most important illuminated manuscripts from Abruzzo, of the second quarter of the 14th century. 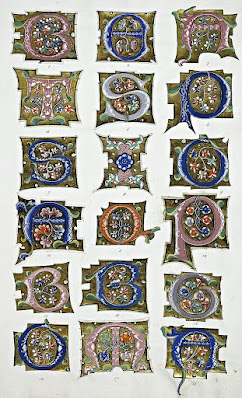 There is a particular type of cut-out illuminated foliate initial which is found in many institutions, and of which examples appear on the market with some regularity. Once you have seen a few they are very easy to recognise, because although one may differ from another in their type of foliage, their formal and technical features are very consistent. The image above has been chosen to give a sense of their overall uniformity as well as variety of foliage-types (click the image to enlarge). Over the course of a couple of posts I intend to look at this large group of initials (I know of more than 200 of them [1]), and consider some questions they raise.

In 1994 Christopher de Hamel suggested that the initials came from the same manuscript as the well-known historiated initials cut from the Murano Gradual; he based this partly on details of their illuminated ornament, but mainly on the script of the text and music on their backs[2], and since then, they have regularly been described as having come from the Murano Gradual. The question of the parent volume has been addressed very recently. In 2019 Bryan C. Keene and Stephanie Azzarello offered some observations both for and against accepting de Hamel's proposal, but left the question open: 'further analysis of this entire group of illuminations is in order and will be part of a longer study'. In a recent article, having had the opportunity for further analysis, they concluded that "[the initials'] association with the Murano manuscripts does not seem likely", and pointing to evidence that "aids in disassociating De Hamel’s group of initials from the Murano series".