The Hours of Renée de Bouchey 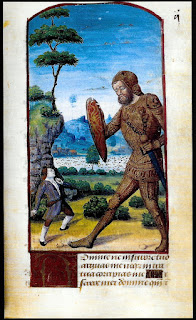 A Book of Hours sold at Christie's, 25 June 1997, lot 27 had already had most of its text leaves removed, and has since been been broken up. This page provides a list of the miniatures (with images of those that have been traced) and a scan of the description.

JEAN COLOMBE and his workshop, BOOK OF HOURS, use of Bourges. ILLUMINATED MANUSCRIPT ON VELLUM [Bourges, ca. 1480]

PROVENANCE:
The calendar, in French, names a saint for every day of the year; in blue are St Genevieve (Jan. 3), St Ives (May 19), St Eloi (June 25), St Martin July 4), St Louis (August 25), St Leu and St Gilles (Sept. 1), St Denis (Oct. 9), St Marcel (Nov. 3), St Martin (Nov. 11), and St Eloi (Dec. 1). The use of the Office of the Dead is Bourges; the text of the Office of the Virgin is missing from the manuscript. 16th-century inscription on flyleaf, names obliterated; early inscriptions on f.4v (signed Renee de Bouchey) and f. 10v. Purchased in Lyons according to a 20th-century pencilled inscription on the flyleaf.

ILLUMINATION:
The iconographic scheme shows that this was once a luxuriously illuminated book of hours, with full cycles of illustration for each of the offices it included. It was subsequently reduced to a book of pictures by the removal of the texts of all the offices except the Office of the Dead. From the offices of the Virgin, the Holy Cross, the Holy Spirit, St Barbara, and St Katherine, most of the miniatures remain; many of these have been remounted on stubs, often reversed recto for verso, and have been bound out of order. The blank vellum leaves that occur between the miniatures in the central section of the manuscript (ff. 38-75) were formerly glued down to the versos of these miniatures in order to conceal the text there; these fragments of text are the only passages surviving from the missing offices.

The style and iconography of the miniatures place this Book of Hours in the workshop of Jean Colombe. The miniatures of the Virgin and Christ enthroned with the company of saints (f.15v) and the Man of Sorrows (f.76) closely resemble those attributed to Colombe in the Très Riches Heures of Jean, duc de Berry, and in Pierpont Morgan Library, M.677. St Luke painting the portrait of the Virgin (f.2) shares the layout and composition of the corresponding subject in M.677, and many other details of style, e.g., the use of grisaille interiors and the foreshortening of upturned faces, correspond to features of Colombe’s work. The miniatures of the mocking of Christ (f.9v), the funeral procession (f.21v), the crucifixion (f.45v), the deposition (f48v), and the entombment (f.50v), are very close to those in another fragmentary Colombe Book of Hours, one that also included the Office of St Katherine (Antiquariat Heribert Tenschert, Katalog XXX [Leuchtendes Mittelalter, V], no. 24). The delicacy and precision of handling in many of the finest miniatures of the present manuscript allow their attribution to Jean Colombe himself: these include the Evangelists, (ff.2, 3 and 4), David and Goliath (f.28), the Virgin and Christ enthroned (f.39), the Nativity (f:59v), Christ in half-length (f.77), St Catherine (f.90) and the Virgin and Child with angels (f.97v).