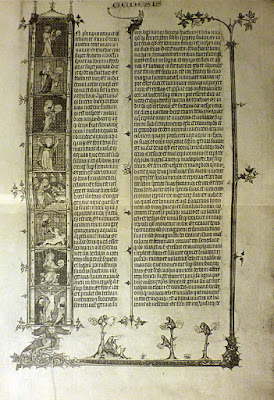 When I first worked for the Bodleian, in the mid-1990s, I became aware of an issue that still causes trouble.

If, hypothetically, the Bodleian had acquired a manuscript on the third day of a five-day sale which began on 1 January, they recorded it as having been acquired on 3 January. Of course this is completely accurate, and represents a historical fact. A problem arises, however, because most people would cite the auction only by its start-date, in this case 1 January, which creates an apparent contradiction. It can then cause a reader some trouble, until s/he realises that the "1 January" catalogue and the "3 January" acquisition both refer to the same auction.

What I realised clearly for the first time is that most people conflate two very different and separate things: on one hand there is an event in the past, the auction, and on the other hand here is a bibliographical entity, the auction catalogue, that may not represent the historical event with complete accuracy.

The Dispersal of the Miniatures of Édouard Kann

The catalogue of the collection of miniatures of Édouard Kann has 46 entries for Western manuscripts (some entries describe multiple items) and 6 for Persian; only a few items are not reproduced among the 48 high-quality plates. It was written by Amédée Boinet and published in 1926 in an edition of 250 numbered copies: 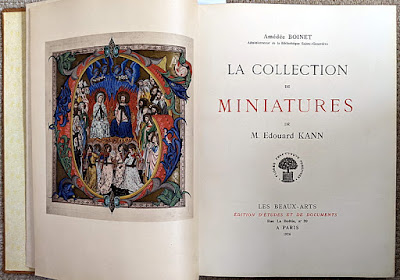 Ever since 1997, when I bought a copy of the catalogue (deaccessioned from the library of the Institute of Fine Arts, NYU), I have had an interest in the collection and its fate, but until now I did not know how or when it was dispersed.

A Second Holford Cutting in Lisbon

Before doing the promised review of the new catalogue of the Gulbenkian Museum's illuminated western manuscripts, today I'll continue the  theme from last week, by discussing a Gulbenkian cutting from the Holford Collection, shown above, whose pre-Holford provenance is still uncertain. It depicts St Benedict, enthroned, surrounded by three sainted popes and five other saints.

Another Holford Cutting, Now in Lisbon

In past blogs I have shown how Robert Holford bought an album of illuminated cuttings, most or all of which had been bought at the Ottley sale in 1838 by "Tindall", later dispersed at auction in 1927; and how Holford also acquired a group of loose cuttings from T.M. Whitehead, later acquired in turn by John Malcolm and the British Museum/Library.

I have just received a copy of the newly published catalogue of the illuminated manucripts at the Gulbenkian Museum. [1] I plan to do a full review of it for next week's blog, but even a summary browse reminds me that there is one important Holford illuminaton that I have overlooked in previous blogs, shown above.

The miniature above, bought by the V&A Museum for £100 from Charles Fairfax Murray in 1894, is valuable both for its intrinsic beauty, and for the fact that it is signed by its illuminator: at the base of the central column is the name "IERONIMUS F[ecit]", making it a touchstone for the style of the artist: 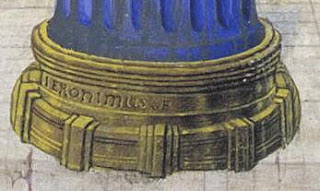 It may be used as the starting point for a consideration of some 19th-century prices and values of illuminated cuttings.