Another Holford Cutting, Now in Lisbon

In past blogs I have shown how Robert Holford bought an album of illuminated cuttings, most or all of which had been bought at the Ottley sale in 1838 by "Tindall", later dispersed at auction in 1927; and how Holford also acquired a group of loose cuttings from T.M. Whitehead, later acquired in turn by John Malcolm and the British Museum/Library.

I have just received a copy of the newly published catalogue of the illuminated manucripts at the Gulbenkian Museum. [1] I plan to do a full review of it for next week's blog, but even a summary browse reminds me that there is one important Holford illuminaton that I have overlooked in previous blogs, shown above.

In the 1927 catalogue of the Holford Collection, by Robert Benson, is a cutting which comes neither from Ottley, nor from Whitehead. It is attributed to the "School of Fra Angelico", and Bernard Berenson's opinion is quoted: "Perhaps by Fra Benedetto, brother of Angelico" [Wikipedia].

Part of the reason I had overlooked it is that it was not sold with all the other illuminations at Sotheby's on 12 July 1927, but was instead included in a "Catalogue of Important Pictures of the Italian School ..." at Christie's, sold a few days later, on 15 July 1927: 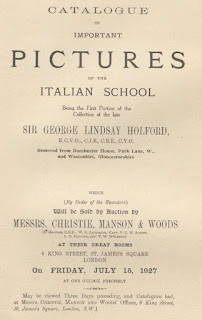 It was catalogued as lot 1, under the heading "Drawings", with the Fra Benedetto attribution, and bought on behalf of Calouste Gulbenkian by [Sir Joseph] Duveen [Wikipedia] for £1995: 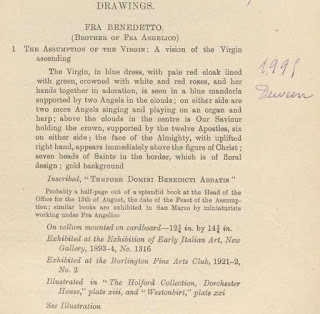 In a previous post I recorded that the Holford album of cuttings was exhibited at the New Gallery, Regent St., London, in 1893-4, and I now realise that the cutting (attributed to Fra Angelico) was exhibited there at the same time:

None of the catalogues I have seen [2] say anything about where or when Robert Holford acquired it -- this is somethign I will have to investigate -- but Angela Dillon Bussi has shown conclusively that the parent volume was made for the Vallombrosan abbey of San Pancrazio, in Florence, and suggested that the cutting can be dated 1437 and attributed to Zanobi Strozzi. We saw last week that in the 1790s Ottly bought cuttings from Santa Maria degli Angeli "at first hand" (which I take to mean he bought them directly from the monks of the monastery, not through an intermediary dealer), and it seems possible that he, or somone with similar taste, would have been able to buy cuttings from San Panrazio, if he offered a sufficient price. Or perhaps the alienation happened a little later: the abbey was suppressed in 1808.

[1] The online ordering system is currently not operational, but international distribution is currently being arranged.

[2] I do not have access to Pia Palladino's entry on the cutting in The Met's exhibition catalogue: L.B. Kanter et al., Fra Angelico (New York , 2005), or to Angela Dillon Bussi's 2006 article in Paragone, in which she re-identifies the subject of the image and deduces its origin.