I ended the previous blogpost [not including its small addendum] by mentioning the Holford Album of illuminated cuttings, which was loaned by George Lindsay Holford (1860-1926) to an exhibition in London, just a year after the death of his father, the collector, Robert Stayner Holford (1808-1892).

In 1927, after George's own death, two well-illustrated catalogues of the collection appeared in print (as detailed in that previous post) but by this time the album had been taken apart, and the cuttings framed.

What do we know about the origin and later history of the album?
Frederic Madden (1801-1873) [Wikipedia] annotated his copy of the 1838 Ottley auction catalogue: 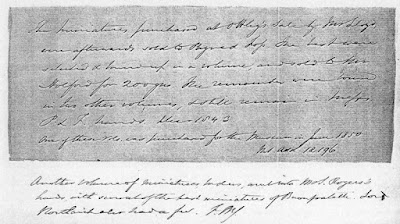 The first of these three comments is dated 1843 and reads:


“The miniatures purchased at Ottley’s sale by Mr Lloyd, were afterwards sold to Payne & Foss. The best were selected & bound up in a volume, and sold to Mr Holford for 200 Gns. [...]” [1]

This seems fairly straightforward, but the details are not entirely clear-cut. Madden's note refers specifically to Mr Lloyd's purchases; "Lloyd" (presumably a dealer, about whom I am trying to find out more) is recorded as the buyer of 20 lots on the first day of the two-day sale, and another 14 on the second. (About 125 lots were sold on each day). Strangely, Payne (of the booksellers Payne & Foss, who, Madden tells us, created the Holford album) bought nothing at all on the first day, and just a dozen lots on the second.

At least two of Lloyd's purchases can unambiguously be identified as items later in the Holford collection (and several more can be so identified with a high degree of confidence), but the vast majority of cuttings that were later in the Holford collection were bought at the sale neither by Payne, nor by Lloyd, but by a third dealer, Tindall, who bought heavily on both days: 31 lots on the first day, and 20 more on the second.

It is possible that Lloyd and Tindall were unable to find customers for their purchases, and thus sold them on to Payne and Foss, but it looks suspiciously as if they were operating together as a consortium or in a "ring". [2]

From the 1843 date of Madden's note quoted above, we know that Holford bought the album within five years of the 1838 Ottley auction, and we learn from Seymour de Ricci, in an article in the Gazette des beaux-arts (January 1925), that Holford bought most of his books from Payne & Foss in the 1840s:
Already immensely wealthy, in 1838 Holford inherited £1,000,000 from an uncle, making him reputedly the richest commoner in England, and this windfall doubtless explains the energetic buying of first-rate manuscripts, printed books, paintings, and other artworks in the following decade.

His vast wealth explains some of the prices he was willing to pay for treasures. As we saw above, Madden records that Holford paid 200 guineas for the album of cuttings, and it is striking that the total price of ALL the miniatures at the Ottley sale -- more than 240 lots -- was not much more than this sum! The one codex in the sale, lot 244 (The Psalter-Hours of Yolande of Soissons, now at the Morgan Library, MS M.729), did not attract an acceptable bid and was bought back by Ottley's younger brother, Warner Ottley, for £27 10s; it was subsequently sold to Holford by Payne and Foss for £70.

On 3 April 1846 Holford took the album to a meeting of the Archæological Institute, where the previously-agreed topic of discussion was "The Art of Design, as applied to the Illumination of MSS., and the peculiarities which mark the productions of each country", as reported in The Gentleman's Magazine:

I am not aware of any other references to the album until the end of the century. Gustav Waagen, for example, in his Treasures of Art in Great Britain (London, 1854), devotes a full 16 pages (vol. II, pp. 205-21) to describing illuminated manuscripts in the collection, but does not mention the album of cuttings:

At the death of Robert Holford the collection passed to his son, George, and he loaned the album to the previously-mentioned Exhibition of early Italian art from 1300 to 1550:

It then seems to have been forgotten about again, because it was not included in the famous Burlington Fine Arts Club Exhibition in 1908, and writing in about 1924 (for the catalogue published in 1927), Robert Benson refers to its "discovery", and its having been "lying hid":

I suspect that the volume was forgotten because it was kept at the Holford London residence, Dorchester House (subsequently demolished, and now the site of the Dorchester Hotel); the art collection in the house apparently stayed in situ while rented out as the American Ambassador, from 1905 to 1912 [3], and during the First World War, when the house was used as a military hospital: 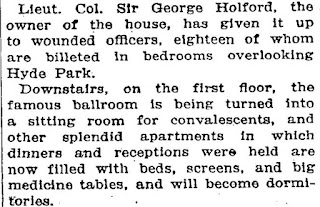 It is easy to imagine the album of illuminations lying forgotten on a shelf or in a cupboard during these decades. In its binding of c.1840, it might not have looked valuable enough to warrant removing it from the Library for safekeeping:
Next time I will begin to look at what happened to the individual cuttings after removal from the album, and sale in 1927.

Notes
[1]   Madden made a very similar note in the 1850 Payne & Foss auction catalogue:


"The miniatures purchased by Mr Lloyd in this sale were sold by him to Messrs Payne & Foss. The best were selected & bound up in a volume & sold to Mr Holford for 200 guineas. [...]"

[2]  I will probably do a blogpost on the operation of the auction "ring" at some point in the future -- I have been investigating the details of its operation recently -- but for now it will be enough to  quote a definition from The Oxford Reference website:

[3]  In de Ricci's 1925 Gazette des beaux-arts article quoted above, he notes that the collection was inaccessible for a long time due to its being used as the American Embassy.
Posted by Peter Kidd at 18:05