Leaves from a 14th-century Dominican Lectionary 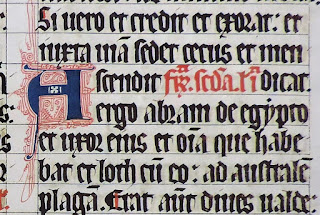 In the last few years I have seen a number of leaves from a volume written in a strange "prescissa" or "sine pedibus" script: in which the bottoms of the minims terminate without an upturn or a lozenge as a foot. The script is perhaps most often associated with England in the 13th and 14th centuries, the Luttrell Psalter being a classic example:

The present manuscript certainly does not look English, however, and attributions have included  "Germany, 15th century", "Flanders, late 14th century", "late XIVth c. ... probably written in Flanders", "Northern Spain, ca. 1350", and "northern Spain, first half of the fourteenth century": people obviously have trouble deciding where and when it was written. I always thought it curious, but had no reason to pursue it. Earlier this year however, I was generously given a leaf of the manuscript, and thus a reason to think about it in a more focused way.

One of the major works by William de Brailes is a series of full-page miniatures, now divided between the Walters Art Museum, Baltimore (which has 24 leaves; online here) and the Wildenstein collection at the Musée Marmottan, Paris (which has seven, six of which are shown above). [1]

The Brummer Gallery Archive IV: Leaves From The Arenberg Psalter 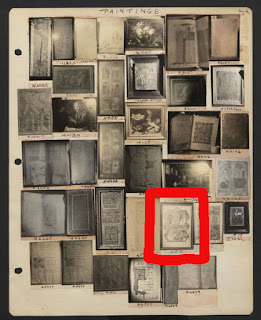 On the same page as the most recent blog post about the Brummer photo albums is a manuscript miniature with a very distinctive shape, shown above, with a detail here: 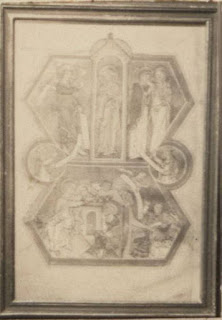 More Manuscripts from the Chateau d'Anet, at Glasgow

Almost 20 years ago I started a website to illustrate marks of ownership, including those characteristic of the Chateau d'Anet.

Jean-Luc Deufic later created an immeasurably more professional site, with a list of all the Chateau d'Anet books known to him, with links to other sites, images, etc. I rarely encounter an Anet book that he does not already know about, but one was the Duprat Bible at Boston Public Library, discussed here.