One of the major works by William de Brailes is a series of full-page miniatures, now divided between the Walters Art Museum, Baltimore (which has 24 leaves; online here) and the Wildenstein collection at the Musée Marmottan, Paris (which has seven, six of which are shown above). [1]

The relevant 20th-century details of the Baltimore leaves are as follows:
Note that Gruel did not say "about 1900" or a similar phrase such as "about the end of the last century". This may be significant: in 1937 "about forty years previously" meant circa 1897.

We now turn to the Wildenstein leaves. They were unknown until Eric Millar published them in 1939. [4] He provided no provenance, and to the best of my knowledge, no provenance has been discovered since then.

The auction of Manuscrits et miniatures ... composant la collection de M. P. Gélis-Didot was held in Paris at the Hôtel Drouot in April 1897: 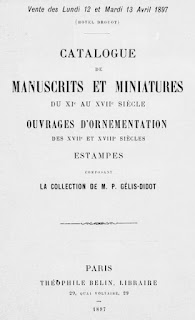 Lot 35 is described as follows:

The subjects and sequence of these scenes, as well as their dimensions and the description of their tooled gold backgrounds, correspond to the set of six framed miniatures in the Wildenstein Collection shown here, and in colour at the top of this post: 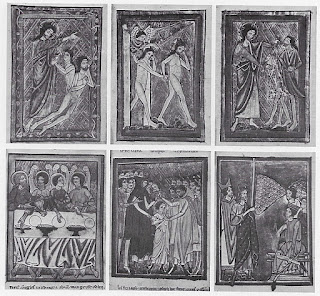 It is not known when Pierre Gélis Didot acquired them, but it may possibly be significant that they are not included among his miniatures exhibited at the Exposition Universelle Internationale at Paris in 1889.

The Wildenstein collection includes a seventh miniature from the same series, depicting Lot and the Angels: 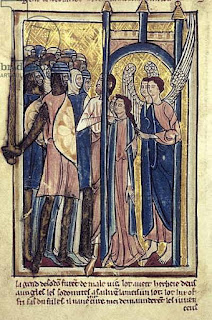 Wildenstein must have acquired this one separately. It is not in the Gélis Didot catalogue, and it has always been framed separately from the group of six, as can be seen in this photo of the former display at the Musée Marmottan: 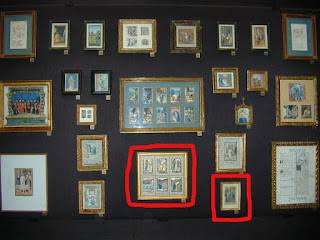 Léon Gruel's memory may have been imperfect when he recalled, about 40 years after the event, that he had bought the Baltimore leaves at the Hôtel Drouot c.1897: the exact coincidence of date suggests that he may have been confusing them with the six Wildenstein miniatures, which (we now know) were definitely sold at the Hôtel Drouot in that year. Or perhaps both groups of leaves surfaced on the Paris market within a few years of each other?

I am confident that Gruel's source for the Baltimore leaves will also be identifiable in due course; we probably only need to search for them in exactly the place that he suggested we should look.

[3] Cockerell went on holiday in France for nearly four weeks from 21 September to 15 October  1937, apparently partly in order to avoid being in Cambridge (or even England) in the weeks adjacent to 30 September, the last official day of his Directorship of the Fitzwilliam Museum. In his diary for 1937 (BL, Add. MS 52675), his entry for Wednesday, 13 October, when he was in Paris, includes:


"had a good talk with M. Gruel, the only survivor of the booksellers of 30 years ago -- he showed me some good MSS and a volume of photographs of very fine MSS that he had sold to the Walters Collection at Baltimore"

He left Paris the following day, and France the day after that, arriving home on Friday 15th October; and among the list of people to whom he wrote letters the day of his return is "Dorothy".