In my first blog-post two years ago I described the mark of Fritz Hasselmann, as found on several items at the Chester Beatty Library, Dublin.

Since then Lugt's Marques has gone online, so we now have far more information about Hasselmann, the sales of his collections, and a photographic example of his ink-stamp. Here are two more examples, one with the end of my thumb, as a guide to its scale: 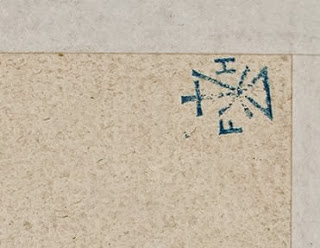 The online Lugt entry for Ed. Schultze (also discussed in my old blog-post) has no new information, but includes a colour reproduction of his ink stamp. Another example online comes from the Cooper-Hewitt Museum.
Posted by Peter Kidd at 13:05 No comments:

More on Otto Ege and His Mounts

As a result of the previous post mentioning Otto Ege, a reader has brought to my attention a new book of which I was unaware: Scott J. Gwara, Ege's Manuscripts: A Study of Ege's Manuscript Collections, Portfolios, and Retail Trade, with a Comprehensive Handlist of Manuscripts Collected or Sold (2013) available from Amazon.com: 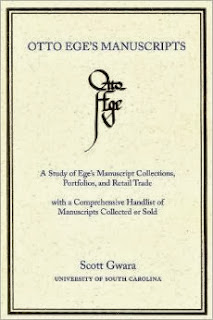 I also thought it might be useful to post images of a couple more Ege mounts ("mats" in American English), as no such images seem to be online apart from those in the article by Barbara Shailor, cited and re-used in the previous post (excuse the dark blotches -- they are caused by dust particles inside my camera): 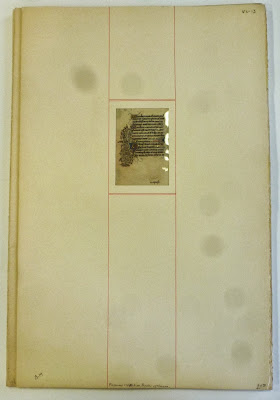 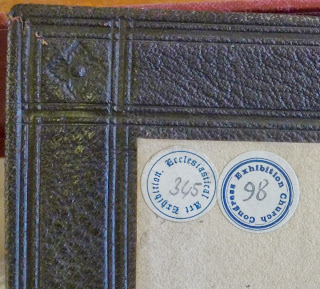 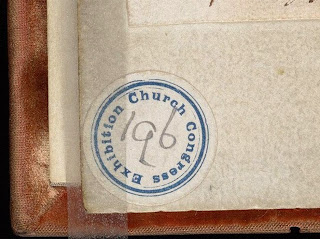 Ashburnham Appendix and other catalogues

In response to the post about the Ashburnham-Libri manuscripts catalogue, one reader asked me about catalogues of the other Ashburnham manuscripts. The catalogues privately printed by Ashburnham himself are still not all available online, but each is represented online by at least one copy of the relevant auction catalogue.

Barrois
Catalogue of the Portion of the Famous Collection of Manuscripts, the Property of the Rt. Hon. the Earl of Ashburnham, Known as the Barrois Collection ... Which Will be Sold by Auction ... Sotheby, Wilkinson, and Hodge ... 10th day of June, 1901, and Four Following Days:
There are also various related publications, notably:

Much has been written about Otto Ege in the past two decades: see, for example, the articles by Barbara Shailor, ‘Otto Ege: His Manuscript Fragment Collection and the Opportunities Presented by Electronic Technology’ (2003) (available online), and by Fred Porcheddu, ‘Otto F. Ege: Teacher, Collector, Biblioclast’ (2006) (also available online), as well as the Ege project website at Denison University.

The most recent flurry of interest in Ege has been prompted by Lisa Fagin Davis’s entertaining and informative Manuscript Road Trip blog-posts here, here, here, and here (and doubtless more will follow).

Ege had a distinctive way of ruling his mounts in red ink; this image comes from the Shailor article cited above, and is also used by Fagin Davis in one of her blog-posts: 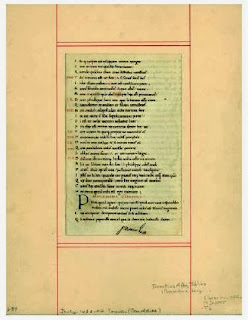 Coincidentally, a few weeks before reading her blog-post, I was looking through a collection of leaves which were waiting to be catalogued by Christie's, London, and recognised that they are in characteristic red-ruled Ege mounts.

One of the smallest leaves (c.120×80mm) in the Christie's group contains the start of the Hours of the Cross, with a rubric and incipit in elegant capitals in alternating colours: 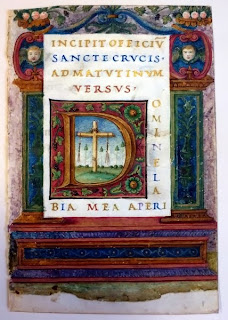 The Post-Medieval Owners of "The Bohun Bible"

The literature on the "Bohun" Bible suggests that the parent volume was written perhaps for a nunnery, perhaps in East Anglia, and was perhaps volume III of a four-volume set of which volume I is now British Library, Royal MS. 1 E.iv. 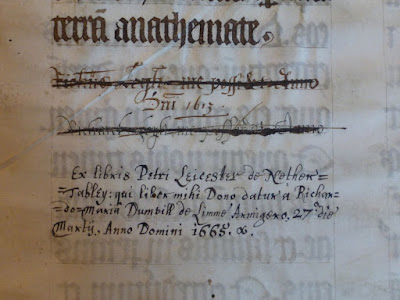 The last leaf of the parent volume of the dispersed leaves, now Bodleian Library, MS. Lat. bib. b. 4, f. 46v (formerly f. 413v in the parent volume), is inscribed “Richardus Legh me possidet Anno Domini 1613” (the first four words are repeated below this, but are crossed through in both cases); this is presumably Richard Legh, b. 1549(?), of East Hall, High Legh, Cheshire, or Richard Legh, b. 1554, of West Hall, High Legh. Extensive genealogies of these families can be found here.
Below the Legh inscription on the Bodleian leaf is:

I have recently read and reviewed Kathryn A. Smith, The Taymouth Hours: Stories and the Construction of Self in Late Medieval England (The British Library: London, 2012).

I have often argued that the post-medieval and even modern provenance of medieval manuscripts can provide valuable clues to their medieval origins and owners, and the Taymouth Hours may be a case in point. I will consider the manuscript's provenance in two parts: here considering its post-medieval homes, working backwards from the present, and then its origin patron in a subsequent post.

The manuscript was bequeathed to the British Museum by the widow of Henry Yates Thompson in 1941. It had escaped being sold in the three Yates Thompson auctions of 1919-1921 because Yates Thompson had given it to her a few years earlier: in 1917 he inscribed its flyleaf as follows: 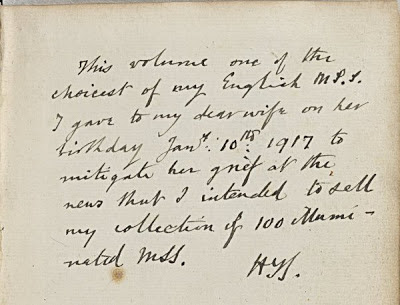 "This volume, one of the
choicest of my English MS.S.
I gave to my dear wife on her
birthday Jan[uar]y 10th 1917 to
mitigate her grief at the
news that I intended to sell
my collection of 100 illumi-
nated MSS.
[signed:] HYT."

The first flyleaf has Yates Thompson's bookplate annotated, as usual, with the acquisition details: 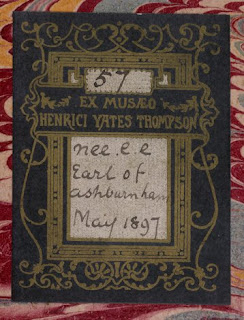 A Fragment formerly owned by Guilford and Phillipps, part II

[Continued from this post]
Looking at the original Phillipps auction catalogues from 1903 and 1911 it was possible to locate the following entries:

"858  Novum Testamentum. Pars Expositionis Bedæ in Actus Apostolorum, manuscript of the tenth century, written in double columns, on vellum, with the book-plate of Lord Guilford, half morocco                     folio X Cent"

This tells us that the manuscript was a bound volume until at least 1911, although incomplete, and that there was definitive proof of having come from the Guilford library, as suggested by the Phillipps catalogue at no. 10614.  This description does not mention that the manuscript was a fragment, so the "fragm." of the first description indicated that it was an incomplete codex. The Schoenberg database does not include single leaves, however old or interesting, but it does include incomplete codices, and the present item can be found there by searching with "Bede" as author and "Guilford" in the Provenance field (I prefer to use the old interface, which is much more user-friendly than the "improved" one).

As usual, the results of searching the Schoenberg database are very hit-and-miss (hits often turn out to be misses), but two are correct:

A marginal note in ink in the catalogue "α/o/o" indicates that there was a reserve of £1 on the lot; it was bought by Thorpe for £1 3s.

Thus we have confirmed that the manuscript comes from the collection of Frederick North, 5th Earl of Guilford (1766-1827) part of whose library was sold in auctions from 1828 to 1835.