A Fragment formerly owned by Guilford and Phillipps, part II

[Continued from this post]
Looking at the original Phillipps auction catalogues from 1903 and 1911 it was possible to locate the following entries:

"858  Novum Testamentum. Pars Expositionis Bedæ in Actus Apostolorum, manuscript of the tenth century, written in double columns, on vellum, with the book-plate of Lord Guilford, half morocco                     folio X Cent"

This tells us that the manuscript was a bound volume until at least 1911, although incomplete, and that there was definitive proof of having come from the Guilford library, as suggested by the Phillipps catalogue at no. 10614.  This description does not mention that the manuscript was a fragment, so the "fragm." of the first description indicated that it was an incomplete codex. The Schoenberg database does not include single leaves, however old or interesting, but it does include incomplete codices, and the present item can be found there by searching with "Bede" as author and "Guilford" in the Provenance field (I prefer to use the old interface, which is much more user-friendly than the "improved" one).

As usual, the results of searching the Schoenberg database are very hit-and-miss (hits often turn out to be misses), but two are correct:

A marginal note in ink in the catalogue "α/o/o" indicates that there was a reserve of £1 on the lot; it was bought by Thorpe for £1 3s.

Thus we have confirmed that the manuscript comes from the collection of Frederick North, 5th Earl of Guilford (1766-1827) part of whose library was sold in auctions from 1828 to 1835.
Guilford travelled widely and his library contains many works concerning Italy. This probably explains the 18th(?)-century inscription it Italian at the bottom of the leaf, "Esposizioni di Beda / Nelli atti delli apostoli": 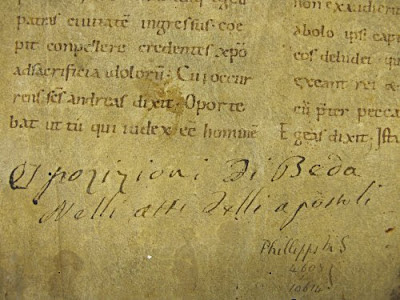 At present we know nothing about the manuscript's earlier history.

It is interesting that the scribe either had a poor command of Latin, and/or was copying from an exemplar with minimal word-separation, as he originally wrote "septe[n]trione" as two words "septe[m?] trione".

The attribution to Bede has a long history but is spurious. The text exists in 8th-century manuscripts, and was probably composed in the 6th century. It is BHL no. 428, and has been edited in the Acta Apostolorum Apocrypha, II part 1, pp.1-37, the present leaf containing the text printed from p.1 line 1 to p.9 line 1.
Posted by Peter Kidd at 11:21