The Hours of M. de Vibrais 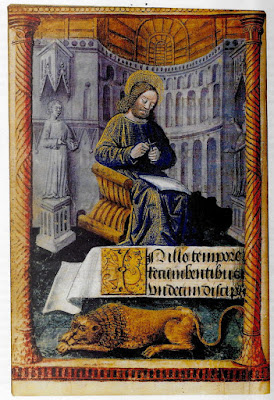 A Book of Hours with miniatures attributed to Jean Colombe and his workshop was sold at Christie's, 2 June 1999, lot 38, and later broken up. This page provides a list of the miniatures (with images of those that have been traced) and a transcription of the description.


The subjects of the miniatures were:

158 x 108mm. 150 leaves, complete, 15 lines written in a gothic bookhand in black ink between 2 verticals and 16 horizontals ruled in dark pink, justification: 105 x 70mm, rubrics in red, one-line initials of burnished gold with grounds and infills of blue and crimson with pale yellow penwork decoration, two-line initials of similar type but often also including green in ground or infill, major devotions open with three-line camieu d’or initials containing a head, SEVENTEEN LARGE MINIATURES extending the full height of the page with three lines of text as though on a scroll, and within an architectural frame made up of two columns, an architrave and socle (holes from pilgrim badges on ff.19 & 20, upper and outer margins trimmed to frames, eight miniatures, ff.13, 21, 59, 66, 70, 74, 79, 103, with varying degrees of smudging or loss); French 16th-century light brown morocco gilt, with a double fillet, a central wreathed medallion with a monogram with the letters R I C M A superimposed and with ‘S’ fermé tools, spine diapered gilt with M, A and ‘S’ fermé (some rubbing, lower joint split at head).

PROVENANCE:
The style of the miniatures would suggest that the manuscript was made in or around Bourges where the illuminator lived for nearly thirty years yet the contemporary addition of the Litany of the Virgin in an Italian hand and the uniform execution throughout of initials in an Italian style confuse the issue. The Calendar is of no obvious assistance in localisation and includes in red the feasts of Lupus Bishop of Troyes (29 July), Hugh of Grenoble (1 April), and Claude of Besancon (6 June).

The name M. de vibrais is written inside the second flyleaf.

ILLUMINATION:
The rather subdued tonality of these miniatures, enlivened with liquid gold highlighting, along with the deep receding settings described in elaborate detail and peopled with vigorously drawn figures identify these miniatures as the work of the Bourges illuminator Jean Colombe. Colombe is most famous for completing the Limbourg brothers Très Riches Heures for the Duke of Savoy at the end of his long and prolific career. The style and iconography of the miniatures of the present manuscript, however, place it among the Books of Hours that emanated from the artist’s workshop in the 1470s when his style still showed the clear impact of his contact with the work of Jean Fouquet. The form of page lay-out is one adoption from Fouquet that is used throughout this manuscript: the text is placed over the painted scene, as though on a scroll, and often supported by a pair of putti: one manuscript with miniatures of comparable composition and organisation is a Book of Hours in the Bibliothèque Nationale (N.a. Lat. 3181), Avril and Reynaud, Les Manuscrits a peintures en France 1440-1520 (Paris, 1993), no 183.