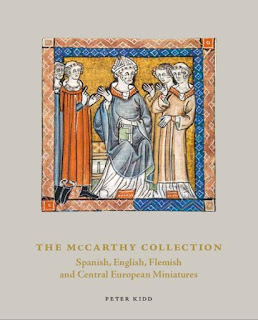 I have numerous blogposts in my drafts folder, but none that are ready to publish without some more work, so this weekend I will instead take the opportunity to advertise that a catalogue of illuminated manuscript leaves and cuttings, containing much new provenance information, was published a few weeks ago.

It can be ordered from the publisher here, but does not seem to be available yet through Amazon or other sources.

Since writing the previous post, I had another look on YouTube, and found a clip of the film in which Baskerville and Adso first visit the Library. All the manuscripts appear in the first 2 minutes of this 4½-minute clip:


This scene includes a few more shots of open manuscripts, mostly the same as the ones seen in the scriptorium scene.

Medieval Illuminated Manuscripts in The Name of the Rose (1986)

I ended the previous post with a modern copy of a medieval manuscript, that had been made as a prop for the film The Name of the Rose [Wikipedia], based on Umberto Eco's book about a medieval manuscript, library, and murder mystery. I later decided to have a look at the film to see if I could see the facsimile manuscript's appearance. I don't have a copy of the full movie, but there is a scene (full of inaccuracies and anachronisms) available on Youtube (embedded below) set in the monastery's scriptorium, and just for fun I decided to take a series of screenshots, to see how many of the manuscripts included in the scene are identifiable.

[The 4½-minute scene should play if if click this YouTube link, with the usual options to pause, watch full-screen, etc.; but you don't have to watch it in order to understand what follows]


Here is an overview of the scriptorium, as seen when the heroes of the story (the Franciscan William de Baskerville, played by Sean Connery, and his young protégé Adso of Melk, played by Christian Slater) first enter the room: 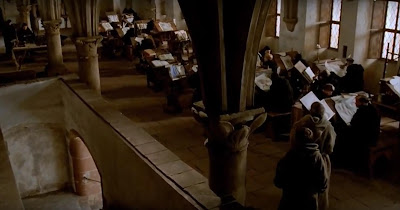 A Fake in Detroit

My recent post about 19th- or early 20th-century miniatures and initials added to medieval manuscripts seemed to be popular, so I will do a series of blogs about other illuminations that I believe to be either entirely modern, or "improved" in the post-medieval period.

Many readers of this blog will have known, or at least known of, Kay Sutton, who died yesterday. Having been diagnosed with cancer a few years ago, and undergone successful chemotherapy, the disease returned untreatably a few months ago. 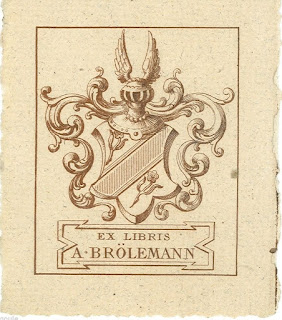 A recent post caused me to look again at the question of the price-code use by at least one of the Brölemanns, and found in their manuscripts.

In my much older post about the Brölemann catalogues, I wrote that If enough examples could be collected, it ought also to be possible to decipher the Brölemann price-code. From the images we have, it is apparent that x=0, and other numbers are represented by c, d,  l, q, s, t, and u.