A Fake in Detroit

My recent post about 19th- or early 20th-century miniatures and initials added to medieval manuscripts seemed to be popular, so I will do a series of blogs about other illuminations that I believe to be either entirely modern, or "improved" in the post-medieval period.

The image above shows a miniature on a cutting at the Detroit Institute of Arts. It was received as a gift in 1925, and was given a full-page write-up in the Institute's Bulletin, with the title "A XIV Century French Miniature Painting" (vol. 6, no. 7, April 1925, p. 76), with a stylistic analysis which begins:


"The tender, wistful expression on his face and his attitude of brooding mildness are just the sort of thing that these mediaeval painters loved to depict ...",


"The dexterity of pen drawing exhibited in our miniature - a characteristic of nearly all the artists at this period - assists in the certainty, tenderness and distinctness with which the work is rendered."

Here is what the writer is describing: 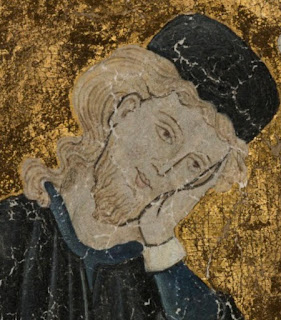 which to me does not look at all medieval.

A decade later the attribution was still, apparently, unquestioned, as it was repeated in Ernst Scheyer, Drawings and Miniatures from the XII. to the XX. Century (Detroit Institute of Arts, 1936).

Just a year after this, however, de Ricci (Census, II, p. 1133) politely expressed his reservations:

"Made in France (XVth c?) ... The exact date of this miniature is by no means certain."

In 1948, Otto Kurz felt no such need to be equivocal, stating plainly that the Detroit miniature "is nothing but a tracing" from the famous Codex Manesse [Wikipedia], "with some minor alterations, as for instance the omission of the sword and the lengthening of the beard", and he provided side-by-side reproductions to illustrate his assertion:
Even if we were unaware of Kurz's opinion, and even if we were unsure about the style of the painting, there are clear indications that it is not medieval.

First, the format makes no sense. The right and upper sides of the frame are rectangular, the lower frame is a weird wedge shape, and the left frame is a bizarre irregular shape, apparently intended to accommodate some orange leafy decoration (the piece of parchment was perhaps cut from a real medieval manuscript, preserving some real decoration at the extreme left edge): 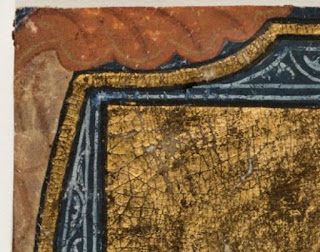 Second, the inscribed scroll held by the figure does not stand up to scrutiny: Some of the ink has flaked, so it is not 100% clear, but apparently it reads:

and is based, as noted in the publications cited above, on the opening lines of Heloise's first letter to Abelard:

Various mistakes, such as "auxilla" for "ancilla", "filio" for "filia", the strange shape of the letter "a", and the "s" in "heloisa", all suggest that the faker was copying from a Latin manuscript (or more likely a reproduction of one) whose handwriting and language that he could not fully read or understand.

Despite -- to their credit -- acknowledging on their website that Kurz published the miniature as a fake (a claim he repeated in the second edition of his book, published in 1967), the Institute still describes it as 14th-century.

As a somewhat-related aside, I can't help mentioning one of the many weird aspects of the Illuminations exhibition at the Palais des Beaux Arts de Lille in 2013.

One manuscript seemed to be especially important, as it had a display-case all to itself: 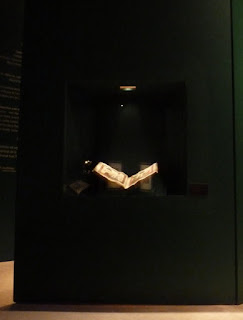 and as the viewer walked closer to the vitrine with controlled light-levels ... 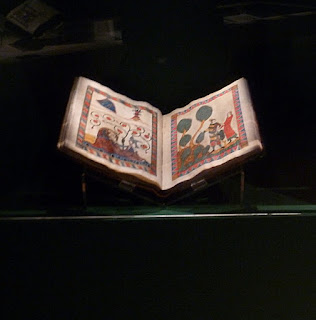 it became recognisable as the famous Codex Manesse: 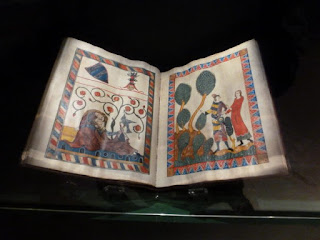 ... but it turned out to be a film prop from the movie The Name of the Rose! 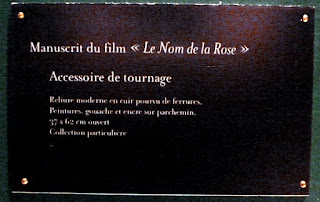