Another Brölemann "Catalogue B" Description

In 2015 I wrote a post about the catalogues of the important Brölemann collection. One more Brölemann manuscripts has recently been digitized (shown above), which prompts me to repeat part of what I wrote before, with some additions.

The front pastedown has four elements commonly found in manuscripts from the Brölemann collection: 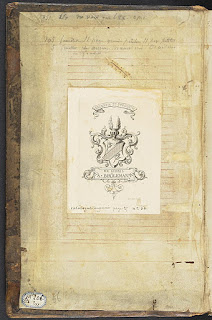 At the top is an inscription, here in pencil and apparently beginning with the year of acquisition, "1851":

The rest is a bit difficult to read. It appears to include "ne vaux que lxx" (i.e. a value, in code), followed by "opr".

I do not know what it "opr" means, but it appears following the price-code in at least two other Brölemann manuscripts: 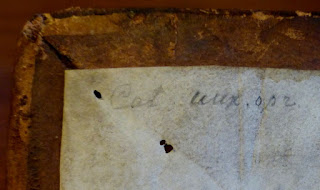 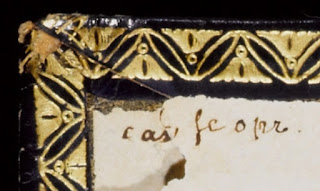 The pencil inscription therefore appears to be a note about the purchase-price and/or value.

In the middle of the pastedown is the usual "Ex libris Brölemann" bookplate: 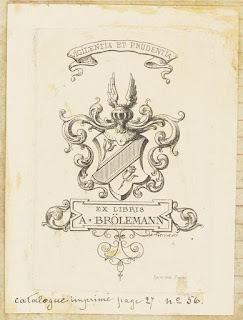 which is inscribed in ink at the bottom "catalogue imprimé page 25 no 56.":

And in the lower left corner of the pastedown, the number "56" appears again, next to an octagonal paper label with a printed blue border: 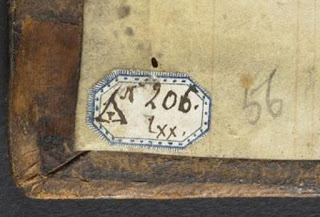 It is inscribed in ink "A No 206." above the price-code "lxx" which we encountered before.

If we turn to the printed catalogue entry describing this manuscript: 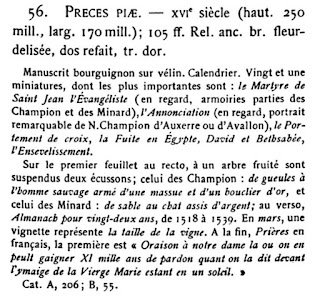 This explains the "A No 206." on the blue-edged label on the upper pastedown, and the description stuck to the lower pastedown, headed "No 55": 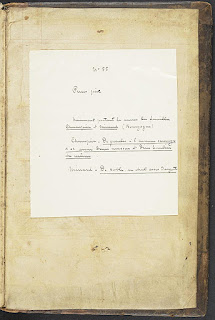 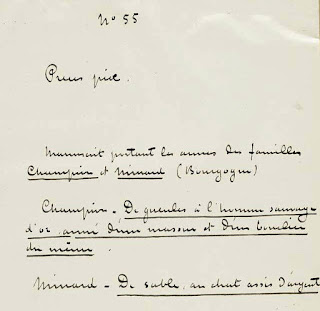 These "Catalogue B" descriptions are very rarely found in manuscripts; this is only the second that I ever seen.

Coincidentally, this manuscript was lot 55 in the auction of the Brölemann collection in 1926, so the recent catalogue entry mistakenly assumes that this 19th-century description relates to the 1926 auction: 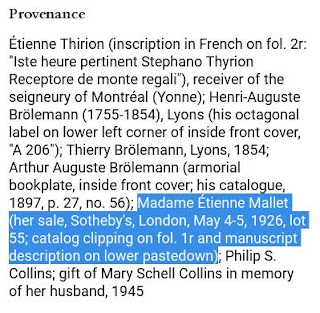 Because of the bookplate, Brölemann manuscripts are easy to recognise. As we collect more and more details like those above, we will get a clearer impression of when, and from where, manuscripts entered the collection, including such star items as the Beauvais Missal.
Posted by Peter Kidd at 14:14