The Mortuary Roll of Lucy of Hedingham

The first of a series of consecutive fixed-term contracts I had at the British Library was a post in 2002 to select medieval manuscripts with specific regional associations, for inclusion in a digitisation project called "Collect Britain" [defunct website], whose purpose was to emphasise that the Library's collections are relevant to the whole of the British Isles, and to make selected items accessible to everyone online, and not just those who, by living in London, could more easily visit the Library in person. It was a wonderful experience, that allowed me to consult a couple of thousand manuscripts that I would otherwise never have had a reason to look at.

One manuscript that particularly fascinated me is the Mortuary Roll of Lucy de Vere, first prioress of the Benedictine nunnery at Castle Hedingham, Essex. The nunnery was founded by the de Vere family, Earls of Oxford, whose family seat was Hedingham Castle [Wikipedia] [1]. The first part of the roll is shown above, with a detail here:


A Mortuary Roll is a roll of parchment, passed from place to place after someone's death, to spread news of the death and ask for prayers for the soul of the departed; each recipient would add an inscription, usually requesting reciprocal prayers [Wikipedia]. The roll had inscriptions added in 122 places across East Anglia and southern England, which made it perfect for the "Collect Britain" project; here is a map showing its itinerary [click to enlarge the image]:
Such rolls are a goldmine for palaeographers, as they provide a snapshot of (often wildly) different scripts, written at specific places, usually over a short period of time and are often precisely dated or closely datable.

In the present case we know that Castle Hedingham was founded in the second half of the 12th century (its rights were confirmed in 1191), and the roll was inscribed by the Franciscans in Cambridge, who were established there in 1226; the Roll is therefore dated c.1230.

The Roll is now digitized in its entirety (here and here). Here is a sample of some different scripts, all probably written within months, or even weeks, of each other:

I recently had a reason to look through the Catalogue of the Entire and Valuable Library of Books, Prints, and Manuscripts of the Late Gustavus Brander, Esq. F.R.S. ... Which Will be Sold by Auction, by Leigh and Sotheby, Booksellers ... On Monday, February 8, 1790, and the Five Following Days: 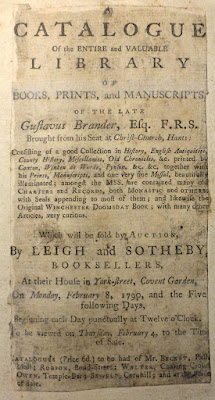 Gustavus Brander (1720-1787) [Wikipedia], was of Swedish parentage, but was born and lived in England, and served as Governor of the Bank of England for nearly 20 years.

There are a number of interesting medieval manuscripts in the catalogue, but what especially caught my eye was this entry:

"[Lot] 1060    A Bede Roll for Lucia Countess of Oxford, Foundress of the Priory of Henningham Com. Essex, written in the 13th century"

(A "Bede Roll" is a roll containing a list of people to be prayed for). If there were any doubt at all that the BL roll and lot 1060 in the Brander auction are one and the same, the back of the roll removes the doubt: it is inscribed "Lot 3", crossed-through, and "1060":

Here is what the BL website (here; cf. here) says about the manuscript's post-medieval provenance:

"The de Vere family, earls of Oxford, in the 17th century: note by Thomas Astle (b. 1735, d. 1803), archivist and collector of books and manuscripts, who states it was owned by the family until 'the end of the last century', presumably until c. 1700; Astle also states that he included it in his Origin and Progress of Writing, p. 211 (attached to the manuscript as the second parchment sheet, signed 'Tho Astle'.). Bought by the British Museum in 1903"

The only post-medieval provenance recorded, therefore, prior to its acquisition by the British Museum in 1903, is that it is said to have been owned by the de Vere family, earls of Oxford, in the 17th century – but the only evidence offered for this assertion is a note by Thomas Astle (1735–1803) [Wikipedia]. Astle's notes are written on a membrane formerly attached to the top of the roll (see the image at the top of this post) and now separated: 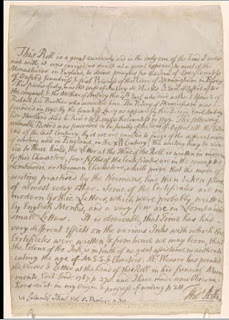 We can add significantly to the provenance recorded by the BL. Not only can we now add Gustavus Brander to the provenance, but the annotated auction catalogue tells us that the manuscript was bought at the Brander sale, for 10 shillings and 6 pence, by "Astle" himself:

The BL description quoted above also mentions that "Astle also states that he included it in his Origin and Progress of Writing, p. 211". Here is the relevant passage, signed by Astle at the end:

"Mr Weaver has printed the verses & Letter at the head of this Roll in his Funeral Monuments, Edit. Lond. 1767 p. 378. and I have made some observations on it in my Origin & progress of writing p 211."

Apparently the BL cataloguer did not pursue these leads. If they had, they would have found the following passage in Astle's book, whose full title is The origin and progress of writing, as well hieroglyphic as elementary, illustrated by engravings taken from marbles, manuscripts and charters, ancient and modern; also some account of the origin and progress of printing), which was first printed in 1784:

"There is in the library of Gustavus Brander, Esq. a long roll of parchment ... requesting prayers for Lucia de Vere, Countess of Oxford ..."

And if they had looked at the second edition, published two decades later in 1803, they would have found an updated version of this paragraph:

"There is in my library a long roll of parchment ... requesting prayers for Lucia de Vere, Countess of Oxford ..."

These sources confirm the successive ownership by Brander and Astle, but neither of them mentions ownership by the earls of Oxford in the 17th century.

What about the the other source cited by Astle in his handwritten notes attached to the manuscript, of which a detail is shown above? i.e. "Mr Weaver [sic] ... in his Funeral Monuments, Edit. Lond. 1767 p. 378"

In John Weever's, Antient Funeral Monuments, of Great-Britain, Ireland, and the Islands Adjacent (London, 1767), under the heading "Castle Heningham", we read this:

"In a parchment roll without date, belonging to the earl of Oxford, I find one Lucia ... founded a priory in this parish for black veiled nuns ..." [he goes on to transcribe passages from the roll, so there can be no doubt that it is the same one]

The implication is that the roll was "belonging to the earl of Oxford" when, or shortly before, Weever's book was published in 1767. Thus while we now have solid support for Astle's assertion that the roll had belonged to an earl of Oxford, in the second half of the 18th century, there appears to be no support for the claim that the manuscript belonged to "The de Vere family, earls of Oxford, in the 17th century".

In the first version of this blog post (which I have archived here, with my errors preserved for all to see! [2]) I did not realise that, even though Astle cited the 1767 edition of Weever's Antient Funerall Monuments ..., it was originally published in 1631:
This thus seems to confirm that the roll belonged to an Earl of Oxford in the early 17th century, and in all likelihood they had owned it since the Middle Ages, or perhaps since the Dissolution of the nunnery in 1536.

We can now confidently trace the manuscript back through at least previously-unrecorded owners:
who acquired it in 1790 at the auction of: 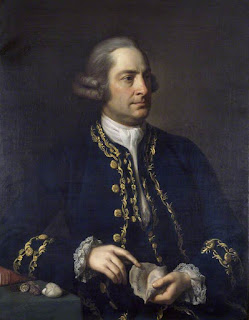 and at some earlier point it belong to the earls of Oxford, including:

As for the modern provenance, the British Library catalogues do not tell us from whom they acquired the roll, so I do not yet know where it was between 1803, when Thomas Astle died, and 1903, when the BL bought it, except that in 1876 it was recorded in the possession of  Lewis Majendie (1835-85) [Wikipedia], who lived at Hedingham Castle:


[1] The Victoria County History for Essex states that Lucy was the wife of Aubrey de Vere, first earl of Oxford, founder of the nunnery, but Knowles et al., The Heads of Religious Houses: England and Wales, I 940–1216, state (p. 210) that this is incorrect, but does identify Lucy as a "de Vere".

[2] Matthew Holford kindly pointed out to me in the Comments to the original version of this post that the first edition of Weever was published in 1631; and having provided an addendum to report this fact, John Lancaster kindly pointed out in a private email that I had misread 1631 as 1731! Many thanks to both of them.
Posted by Peter Kidd at 09:43