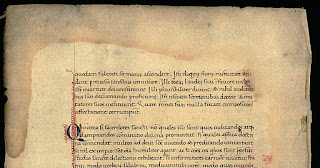 In a footnote to the previous post I mentioned that Ernst Detterer owned a 29-leaf portion of a 15th-century Italian copy of Prosper of Acquitaine (now re-attributed to Julianus Pomerius), De vita activa et contemplativa, on paper, of which one leaf is at the Newberry Library:
The manuscript is rather plain, but elegantly written, with two-line initials alternately blue flourished with red, or plain red, and space for rubrics which were often left blank: 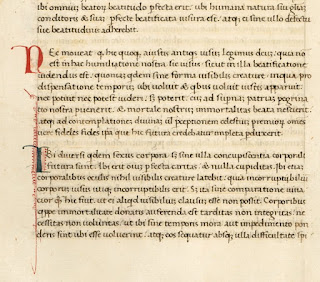 When rubrics are present, they often appear to be slightly later additions: they are written in a less careful, smaller, different script:

One of the distinctive features of the leaves is the pattern of water-staining around three margins; I have manipulated this image and the detail at the top of this blog-post to make it clearer:
The following day, I encountered a leaf from the same manuscript on the website of the University of Iowa (xMMS.Misc5), partly recognisable by the pattern of water-damage: 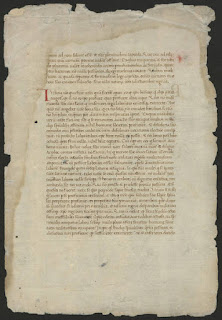 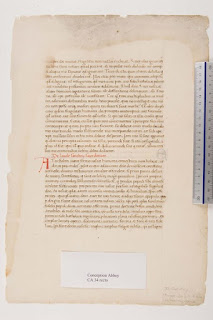 I later realised that Scott Gwara mentions the manuscript several times in his Otto Ege's Manuscripts, and reproduces two more leaves (although cropped to omit the water-staining), one at the Toledo Museum of Art, Ohio: 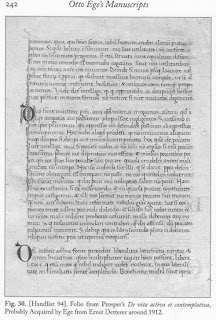 and a detail of one of three leaves at the University of Colorado, Boulder (images of all three are online here).

We know from de Ricci's 1935 Census that Detterer owned 29 leaves:

According to the Schoenberg Database [SDBM_185260], the Tregaskis catalogue from which he acquired the leaves was no. 720, issued in March 1912 (the catalogues are called "Caxton Head", after the name of his shop): 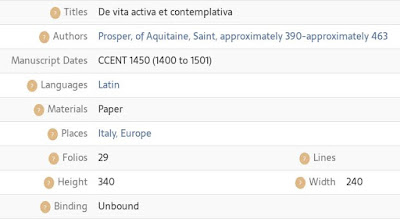 This Database record was created in 2010 and updated in 2013, so it postdates the big data-migration in 2009, and therefore ought to be reliable [cf. the cautionary tale about the reliability of the Schoenberg Database here].

While I have not been able to consult a copy of Tregaskis catalogue no. 720, reportedly issued in March 1912, I have seen a few others of similar date, and so I know that the manuscript was not bought by Detterer in 1912, as it was offered (or re-offered) in Catalogue no. 737, dated 17 February, 1913:

From this we see that there were 39 leaves in 1913, so Detterer presumably gave away, sold, or exchanged ten leaves between 1913 and the publication of de Ricci's Census in 1935. (This also suggests that the Schoenberg Database record for the 1912 Tregaskis catalogue is unreliable, as it reports the manuscript having 29 leaves, not 39).

The fact that the Tregaskis description reports the presence of an "illuminated capital" suggests that the first leaf of the manuscript was present, but it is not clear how "defective" the manuscript was at the end -- was it simply water-stained, or were leaves missing? We can probably answer this question.

Most of the leaves of which I have images have a 15th-century foliation in the middle of the upper margin of the recto, e.g. these, on the leaves now in Boulder: 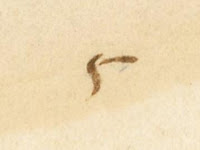 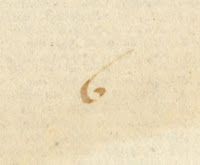 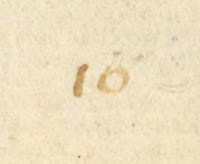 The leaves identified thus far (with references identifying the passages of text as printed in Patrologia Latina, vol. 59) are:
From the fact that fols. 5 & 6 are a bifolium and have continuous text (and are thus the central bifolium of their quire), corroborated by the fact that fol. 10 has a catchword, we can see that the first quire (and presumably those following) was composed of 10 leaves.

From the above references to the Patrologia Latina, it can also be seen that each manuscript leaf typically contains slightly more text than 2 columns of the printed edition. The text in the edition ends at column 519:B, which suggests that about three more manuscript leaves would have followed the leaf now at Iowa.

From the leaves that have been traced, it is clear that the water-damage gets progressively worse towards the end of the volume. The Iowa folio number is not entirely clear, but certainly ends with an "8", and so must be "38", and thus was the penultimate leaf of the 39-leaf portion sold by Tregaskis in 1913: 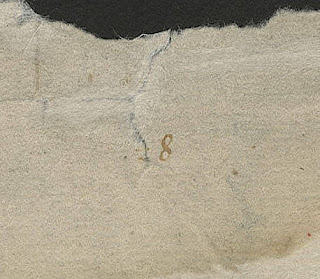 It therefore seems that, by 1912/3, two leaves with the very end of the text were missing following folio 39.

This means that there are 32 leaves, perhaps all still in US collections, waiting to be recognised and added to the reconstruction above.


EDIT 4 April 2020
I have now found images of the Toledo leaf on their website (catalogued as "Roman letter Mss" and can thus confirm that it was fol. 36.
EDIT 31 March 2021
Thanks to Laura Cleaver sharing images with me, I now see that Tregaskis offered the leaves as no. 396 not in Catalogue no. 720, issued in March 1912, as recored in the Schoenberg database, but in Catalogue no. 729, September 9 1912: 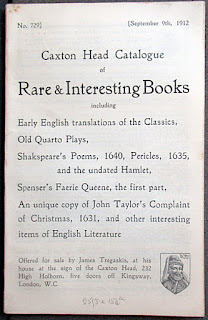