Leaves from a Book of Hours Repurposed as an Armorial 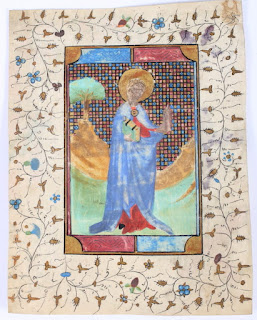 The leaf above was sold this week in a provincial English auction. The miniature presumably represents St Barbara holding a miniature tower, or Mary Magdalene holding her ointment-jar, but it is in poor condition, so it is hard to judge its artistic merit. It is on a leaf that was originally blank on the other side, and was thus doubtless the verso of single-leaf miniature, prepared in the southern Netherlandish manner for insertion into a Book of Hours.

Very strangely, the blank recto was later used for drawing the arms of various English families, identified in 17th(?)-century captions: 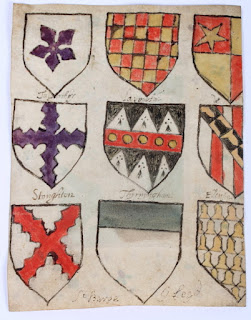 While looking for something else (this always seems to be the case) I found that two more leaves from the same manuscript, in much better condition, are at the Free Library, Philadelphia:

From these miniatures we can see that the illuminator was quite accomplished, as shown by the head of Anthony: 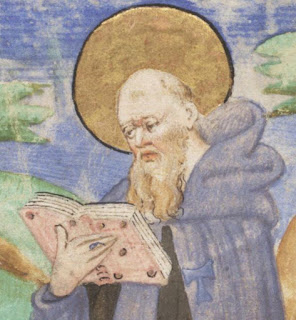 and the draperies of John: 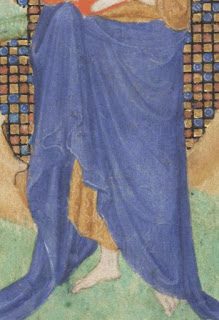 The extent to which the shields are cropped at the sides and at the bottom give an idea of how much wider the margins of the miniatures originally were: 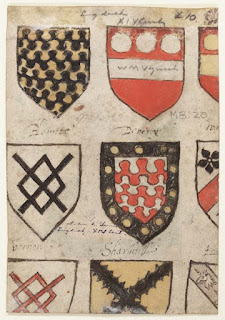 Presumably there are many more miniatures from the same parent volume waiting to be recognised, and I will be glad to hear from any reader who encounters them. And perhaps someone who knows more than me about heraldry can identify the families, to see if they point to any particular region of England?

Inscriptions on the rectos record that John F. Lewis bought them from "W M Voynich", identified as 14th-century English, for £10 each: 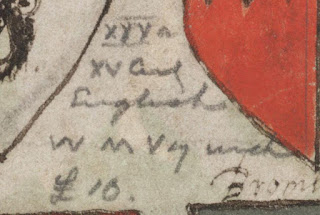 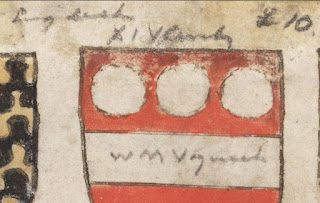 Wilfrid Voynich (1865-1930) [Wikipedia] is famous thanks to The Voynich Manuscript at the Beinecke Library (MS 408), but he is not otherwise generally associated with illuminated manuscripts, so I went to have a look at some of his catalogues at the British Library. Of about a dozen catalogues I looked at, none seemed to include medieval manuscripts, although he claimed to have them in stock, in both his London and Paris locations, including "Single Miniatures on Vellum": 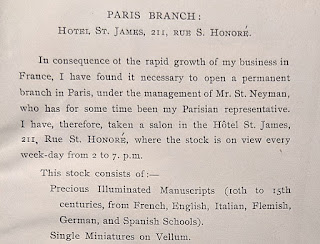 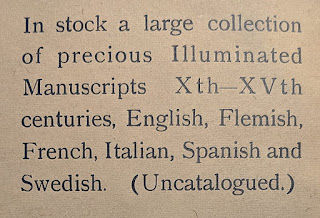