Browsing images downloaded from the Bibliothèque virtualle des manuscrits médiévaux (BVMM) this week, I came across a manuscript with unusual script and very distinctive penwork decoration, now in Lyon, shown above, and here in a close-up detail: 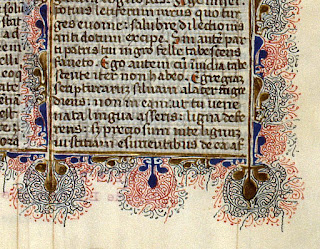 Regular readers will recognise this strange decoration, which combines full and half fleurs-de-lys alternately blue or gold, with dense filigree penwork in red and blue, from a recent post:
I am not only pretty confident that the penwork is by the same person, but also that these two books were written by the same scribe (though he was writing more carefully in the ex-Durrieu Book of Hours than in the Lyon manuscript).

The Lyon manuscript contains an unusual combination of theological pieces, by Augustine, Anselm, Hugh of St-Victor, Bonaventure, and others (listed here), decorated with a series of historiated initials most of which appear to be somewhat damaged, and a miniature that is in better condition: 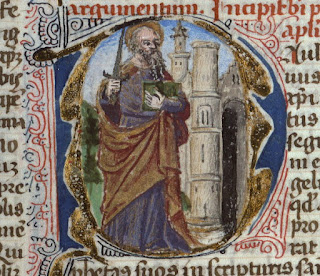 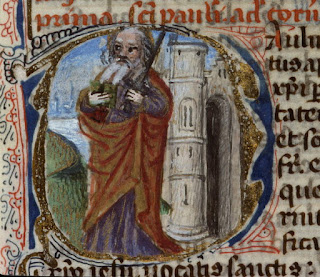 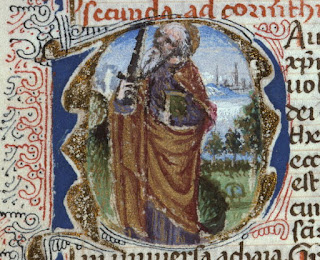 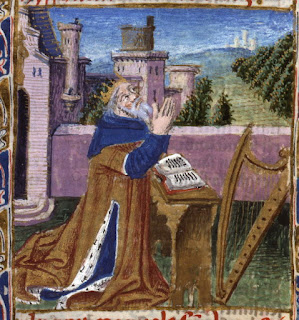 Not only are the script and secondary decoration very similar to the ex-Durrieu Book of Hours, but so too is the style of the illumination. Compare, for example the Job of the ex-Durrieu Book of Hours with David in the Lyon book (there are certainly differences, perhaps partly because of their different sizes, but the shape of the head, colour and brushwork of the hair and beard, the down-turned mouth, large bulbous nose, shadowing of the underside of the beard, etc., are quite comparable): 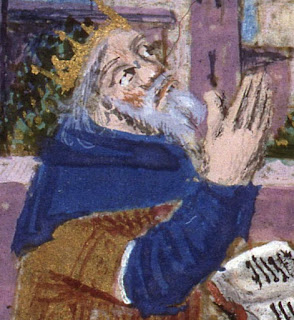 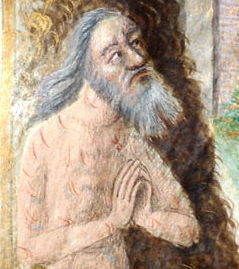 A second artist seems to be responsible for just one initial in the Lyon manuscript, Christ's most distinctive features being his very pale flesh and his enormous hands: 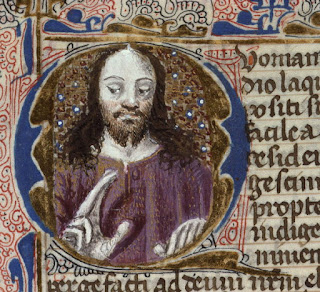 Although obviously based on a well-known common model, this is comparable to one of the miniatures in the ex-Durrieu Hours: 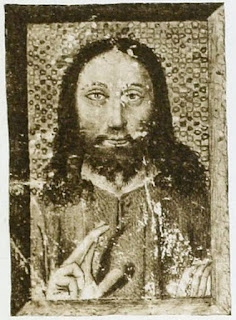 It is hard to judge, due to damage, but perhaps a third illuminator was responsible for a miniature depicting the Descent from the Cross, on the very first page of the Lyon manuscript: 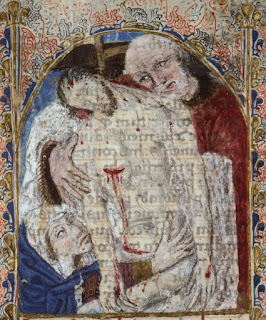 Comparison is difficult, but the proportions of Christ above, with narrow shoulders and small head, is somewhat similar to one of the miniatures added to the ex-Durrieu Hours, but such comparisons are rather general, not especially close: 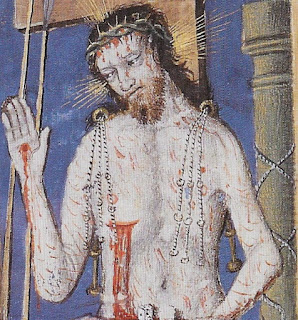 According to the description of the Lyon manuscript in the Catalogue générale, vol. 30 (Paris, 1900), pp.169-70, "La date de 1469 est au fol. 144 vo.", presumably between the end of the Breviloquium of St Bonaventure and the following text:

We therefore now have some concrete support for the "c.1460-70" date that has previously been assigned to the ex-Durrieu Hours, and we now have greater insight into the the activity of its scribe, decorator, and one of its illuminators, who seemed to have worked together on at least one other unusual commission. Perhaps the scribe or illuminator also executed the penwork? Or perhaps all three were done by a single person?
Posted by Peter Kidd at 15:28