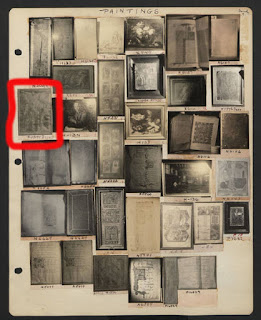 At the left edge of the page above, introduced at the top of a previous post, is a Crucifixion miniature, apparently from a late 15th-century German or Bohemian Missal: 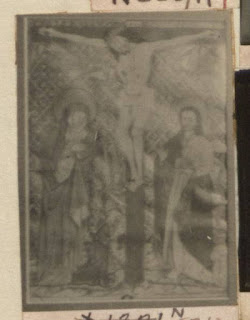 The Brummer Gallery stock card again gives us a better image, and some further information. Although it is attributed to France, which even in this small image we can see must be wrong, we  learn that it was "On consignment from Mrs. Otto H. Kahn" from 19 March 19, 1942; bought from her on 12 October, 1943; and "Sold to Simkhovitch, Jan 26 [19]49". 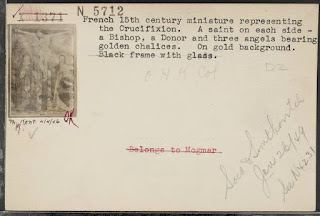 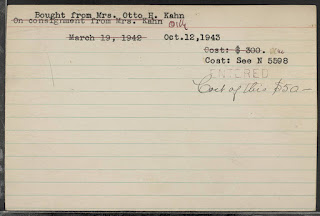 A manipulated close-up of the image reveals what was not clear before: there is a figure, perhaps in ecclesiastical vestments and perhaps wearing a mitre, kneeling at the foot of the Cross: 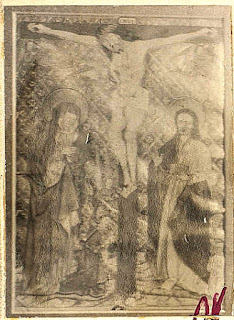 The fact that the miniature was sold to Vladimir Simkhovitch (to whom I may devote a future post) is a clue to its present whereabouts: he supplied manuscript illuminations to a number of institutions, but had a particularly close relationship with the Cleveland Museum of Art. Sure enough, the miniature can be found on their website:
From the CMA's online zoomable image we can now see that, not only is there a kneeling bishop at the foot of the Cross: 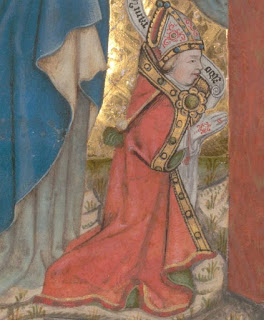 there is also a Carthusian monk kneeling next to St John: 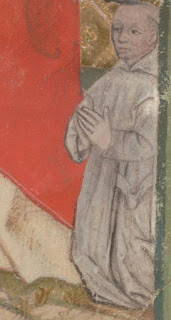 The miniature is attributed on the Cleveland Museum website to Silesia or Bohemia, ca. 1480, but online searches using the Museum's inventory number have failed to find any published discussions of it. The quality of the painting is high; perhaps a reader of this blog recognises the artist? 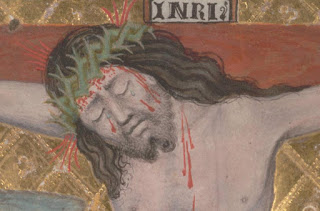 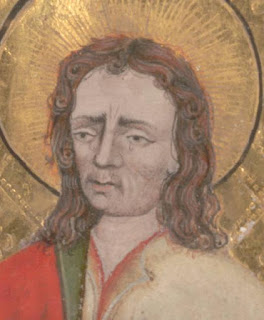 In the September 1963 issue of the Bulletin of the Cleveland Museum of Art, the Museum recorded the miniature's only previous provenance as Brummer and Simkhovitch:

This suggests that the prior ownership by "Mrs. Otto H. Kahn", recorded by Brummer on their index card shown above, may be previously unknown. A whole Wikipedia page is devoted to her husband, "a German-born American investment banker, collector, philanthropist, and patron of the arts", but she only gets a passing mention. There are, however, several images of her online, including this one:
Mrs Kahn outlived her enormously wealthy husband by 15 years. 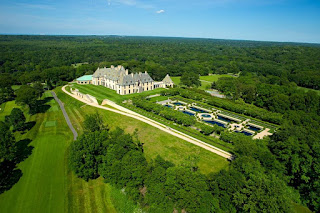 As a footnote, he was the builder of Oheka Castle on Long Island, which, with 127 rooms, was the second largest private house in the USA, and he is sometimes said to have been the inspiration for the character, introduced in the 1950s, on the box of the board-game Monopoly: 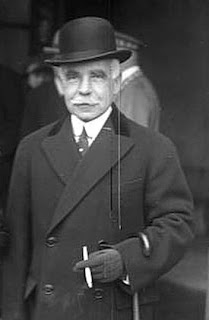 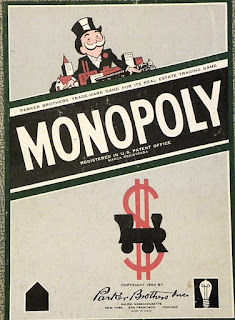