The Brummer Gallery Archive I: An Antiphonary from Regensburg

I have very recently become aware of the archive of the Brummer Gallery [Wikipedia], New York, now held by the Metropolitan Museum. Medieval manuscripts were a very small part of their business, but some of them are of great interest; I anticipate doing at least three blog posts.

A nice example is on the page above, from the Gallery's scrapbook of sold items. Under the heading "Miscellaneous - Leather" it includes five small photos of bookbindings, and three of the insides of the respective books.

In the middle of the top row is what appears to me to be a very undistinguished binding (inventory number N6237), but next to it is a view of the open book: 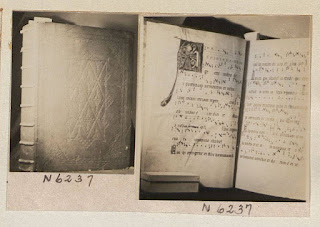 The page with the historiated initial:
is recognisable as a leaf now in the Nationalmuseum, Stockholm:
This is one of a series of 20 leaves, of which the present whereabouts of a dozen are known to me: in the Stockholm National Museum, the Houghton Library, the Morgan Library, the Walters Art Museum, the Seattle Art Museum, in private collections, and others have been in auction and dealer catalogues:

They can all be traced back to Raphael Stora, a New York dealer, who started to offer them for sale in 1954. The previous year, he had loaned four of them to an exhibition at the LA County Museum: 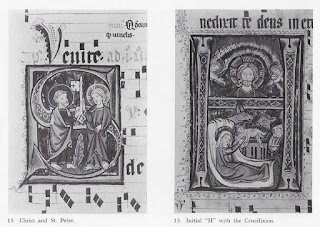 The 20th-century provenance prior to this 1953 exhibition was previously unknown, but thanks to the Brummer Archive, we now know that the Brummer Gallery bought the volume at a Parke-Bernet auction in New York on 5 March 1945: 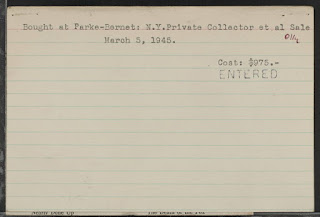 Without this clue, we might never had made the connection, because the catalogue has no reproduction, and mis-dated the manuscript by at least a century: 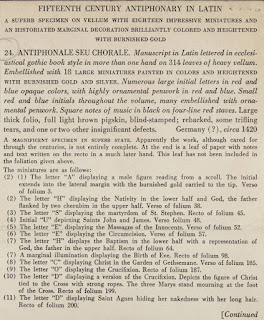 As for the origin of the manuscript, all scholars agree that the style of illumination indicates Regensburg. Since 1987 -- most recently in the Boston Beyond Words exhibition catalogue entry -- most publications attribute it to the Dominican nunnery of Heilig Kreuz, and date it either c.1310 or c.1300-30. In my view it is close in style to a Lectionary at Keble College, Oxford, made for Heilig Kreuz, which supports the localisation to Regensburg, but does not support a 14th-century date, because the Oxford Lectionary is datable to before 1276.

In addition, I see no evidence for a connection with the Dominican nunnery of Heilig Kreuz. On the contrary, the rubric that introduces the volume (on one of the four leaves now in Stockholm, reproduced in the 1979 Stockholm catalogue of illuminated manuscripts by Carl Nordenfalk, of which a scan is shown above), suggests that it was written for a Franciscan house:


A much more detailed account of this Regensurg Antiphonary will be in vol. II of the forthcoming catalogue of the McCarthy Collection, of which vol. I has now been announced.
Posted by Peter Kidd at 08:33