The other item in the 1929 catalogue that caught my eye is this: 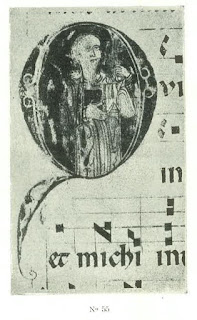 Described as St Peter holding a key, in red green and yellow, on a leaf 26×23cm:

The reproduction is not very good, but one can see enough script to ascertain that it is southern French or Spanish, probably no earlier than c.1200, but the draperies are formed in a way that feels very 'Romanesque'; this is more apparent if the contrast of the image is increased: 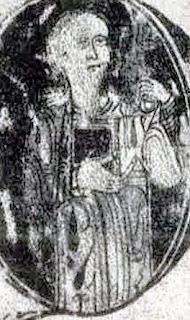 This style of draperies, combined with the script, dimensions, and reported palette, are enough to confirm that this leaf comes from the same manuscript as a leaf I have working on during the past few years, of which this is a detail: 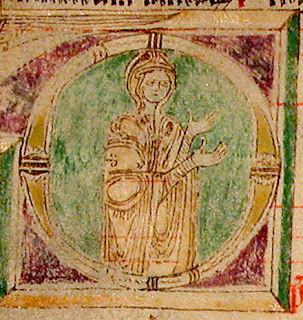 The Barroux leaf is now the fourteenth leaf or cutting I have found; others are in the Princeton Museum of Art; the Lilly Library; and the Museum of Fine Arts, Boston. I helped catalogue another for sale at Christie's in November 2016, and several more are reproduced in the 1907 catalogue of the collection of Robert Forrer:
The leaves have been trimmed at top and bottom, so that they are now rather square in shape; they look like this:
Those I have identified so far are:
If any reader knows the whereabouts of any of the Forrer ones, or any others not listed above, please contact me.