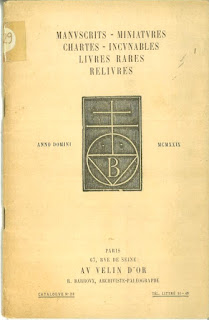 I want to check an ambiguous reference to some items bought from "Barroux" in 1929 or 1930, perhaps from a catalogue no. 24. After some effort I determined that this probably refers to Robert Barroux, whose Paris bookselling firm was called "Au Vélin d'or". But copies of the catalogues are apparently very rare, to judge by records on Worldcat.

A copy of Catalogue 23, from 1929, is at the IRHT in Paris, and Hanno Wijsman kindly made a scan of it for me; the front cover is shown above. It turns out that the items I am looking for are not in this catalogue, but I recognise two other items that are included, on which I will do two short blog posts.


Here is plate II in the catalogue, and the relevant description [as usual, click to enlarge]: 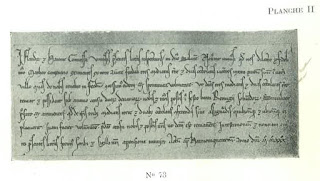 This would have meant nothing to me, except that I had seen the document earlier this year, at the Spurlock Museum, Urbana, as part of a MSS-hunting trip (a MSS safari?) across parts of Illinois and Indiana.

The document appears on the Museum website here, with some basic data, and with large images of the face and dorse. It begins in the name of "J" [i.e. Joan (d. 1244)], Countess of Flanders & Hainault [Wikipedia]:
and is dated at "Haimoniquercetum", November 1236:
"Haimoniquercetum", as Barroux realised, must be Haymon Quercitum, now known as Le Quesnoy, in Hainault, Joan's main residence [Wikipedia].

Barroux also suggests that the endorsement "de cou Ke M li cambietteus douna" (i.e. de ce que M[athieu?] de changeur a donné) is one of the earliest recorded references in French to a banker or money-changer.

I had not realised the significance of this terse inscription on the back of the document, and this is therefore a nice example of the valuable information one can recover by tracing manuscripts back through auction and dealer catalogues.
Posted by Peter Kidd at 10:01