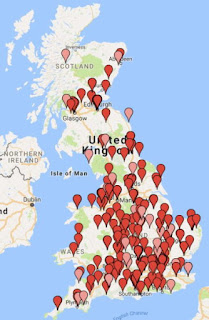 Many readers will know of Neil Ker's invaluable Medieval Manuscripts in British Libraries (5 vols, 1969-2002), often abbreviated to "MMBL", which, in about 3000 pages, aimed to provide catalogue descriptions for all uncatalogued medieval manuscripts in British institutional libraries, i.e. those
I have just finished plotting these institutions (about 330 in total) onto a Google Map, the idea being that whenever I go on a trip within Britain I can easily check which institutions in that area have medieval manuscripts, and check MMBL to see if any of them are of potential interest to me. This is almost impossible to do using the printed volumes, which are arranged by place-name, not by region (except vol. I, which is entirely devoted to London).

Thus, for example, if I were going to Glasgow I would find a few Glasgow institutions alphabetised under 'G' in vol. II (Burrell Collection, Hunterian Museum, Mitchell Library, and University Library), but it might not occur to me to look in the Addenda in vol. V where I would find references to Strathclyde University Library and Bearsden (a few miles away), and I might not think of looking in vol. IV for Paisley: 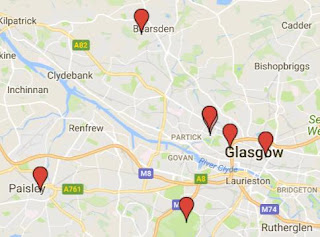 As well as plotting the locations of the institutions, I have entered the MMBL volume and page references; this should be especially useful when entries or addenda are to be found in vol. V:

The map can be found here, [see the updates below; the new version of the map is here] and I hope people will experiment with it and send feedback, bearing in mind several important caveats:

Vol. I was published in 1969 and vol. IV in 1992 (vol. V is mainly indexes), which means that the vast majority of descriptions are at least 25 years old, and many were created as long as 50 years ago. During this interval many of the institutions have moved location, ceased to exist, placed their manuscripts on deposit elsewhere, or have sold them. When I am aware that a MMBL location is no longer current, I render the map-marker in a paler colour: 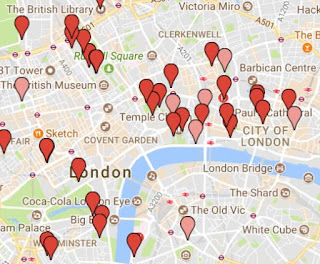 If I know any further information, I may provide it; for example, Sion College has closed, and its manuscripts are now at Lambeth Palace:

The three manuscripts at the Rothamsted Experimental Station, Harpenden, were sold as recently as last month:

I have attempted to position the place-markers precisely, on the relevant building:
but I have not usually attempted to verify whether the manuscripts are really stored (or made available to researchers) at those locations.

When an institution is not a single building (such as an Oxbridge college) I have usually placed the marker in the middle or at the main entrance; for universities, however, I have usually tried to identify the library building in which Special Collections are held.

In many cases institutions have changed their name. In the same way that many provincial French bibliothèques have been renamed mediathèques, many a British archive and record office has been re-branded as a user-friendly Heritage Centre, Discovery Hub, etc. In these cases I am often not confident that I have identified the newly-named holding institution correctly.

In short, ALWAYS contact institutions in advance to ensure that they hold the manuscript you want to see, and that they can make it available on the date of your visit.

Please do send me corrections for any institutions with which you are familiar. Please also send information about institutions not included in MMBL. My intention is that whenever I am able to verify an institution, I will link its place-marker to the brief form of the Google data for that place, which will usually include a precise physical address and phone number: 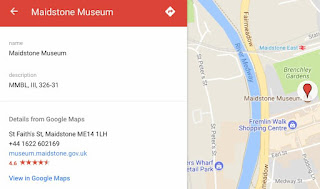 as well as a link to the place in Google Maps with more information, such as website, opening hours, photos, etc.: 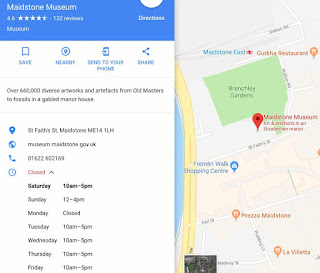 In an ideal world, this map would be linked to basic catalogue data for the manuscripts themselves (perhaps just Author, Title, Place and Date of origin?), and/or links to online images. It seems to me that it would be a good project for a body like AMARC to sponsor; it is beyond my capabilities, but maybe a reader with the necessary expertise could apply for funding?

Update:
As an experiment I have split the places into two "layers", which can be viewed either individually or simultaneously: one has the places which are thought to hold medieval MSS, the other has those places that are now thought not to.

Update II, 18 August 2018:
I have now added about 40 more collections that are represented in MLGB3, but not in MMBL; they appear with blue place-markers as a separate layer on the map here.


Incidentally, I compiled the Index of Iconography that appears in vol. V, so if anyone would like an electronic copy of this index, let me know.