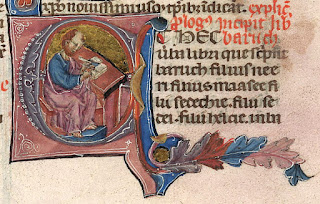 The recently-published catalogue of the Rouse manuscripts at UCLA lists the five portions of the Goodspeed Bible that I had identified by 2010, and also refers to the Psalms section, which I did not mention in my original blog post because I did not at that time know where it was.

Bill Stoneman had alerted me and the Rouses to its existence; it is known to have belonged to Philip Hofer, because he refers to it on a flyleaf of his Esdras III portion of the Bible:
As the whereabouts of the Psalms section was neither mentioned in the catalogue description nor in any of the bibliography of the Esdras section, I assumed that Hofer had sold the Psalms section (as he did with many other manuscripts) at some point before his death.

Eventually, earlier this year, I looked for the missing Psalms section in the most obvious place, and found it among the Hofer manuscripts still at the Houghton Library: it lies unrecognised as MS Typ 705.

By looking at how the Esdras III portion (MS Typ 30) is catalogued in the Harvard Library system:

I was able to do a search that resulted in a similar catalogue record for MS Typ 705:

Note that, in both, the height dimension is recorded as "33 cm".

None of the initials that I have seen has made me doubt François Avril's original attribution to Perugia/Umbria. When selling a portion in 2003, the Christie's cataloguer wrote "The delicate forms of the acanthus sprays, their twisting leaves turning from pale blue to pink and orange and from yellow to orange, point to an origin in Umbria, probably Perugia, around the middle to third quarter of the 14th century." 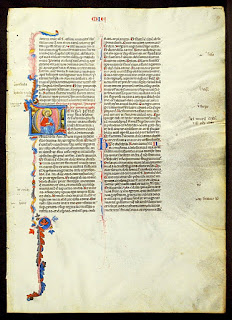 But finding this portion not only brought the relief of solving a long-standing puzzle, it also provided two kinds of important information. First, the Psalms begin with the largest initial yet found, and thus this is our best guide to the style, and thus origin, of the manuscript; the quantity and quality of the Psalms initials may in due course allow specialists of Italian illumination to be more precise. 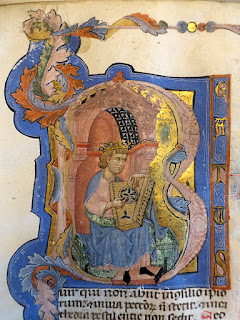 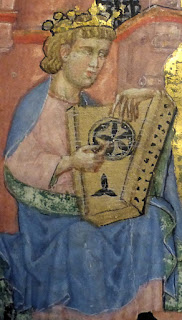 A second important feature of the discovery of the Psalms section is that the Psalm 97 initial, which usually depicts monks singing at a lectern, unambiguously shows Franciscans, which is thus a strong clue to the patronage of the volume: 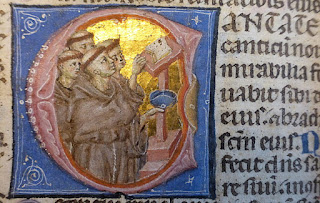 In preparation for a trip to Chicago this summer, I trawled the catalogue of the Newberry Library looking for leaves and cuttings that might be of interest. Among other finds (at least one of which may make a future blog post) is this: 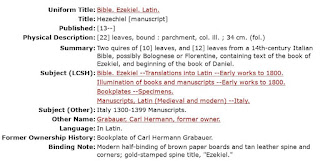 Although the height is recorded as 34 cm, the description of the binding ("Modern half-binding of brown paper boards and tan leather spine and corners; gold-stamped spine title, "Ezekiel."") left me in no doubt that this is another portion of the Goodspeed Bible, bound like the others (cf. the previous post), and so, when I was able to see it in person, it turned out to be. 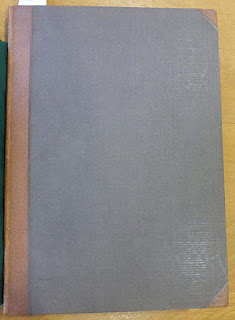 Among other things I found while trawling the Newberry catalogue was a leaf of a Italian Bible, whose height is recorded as 33 cm, which seemed suggestive:

And sure enough, when I got to see it, I found that it does indeed come from the Goodspeed Bible. 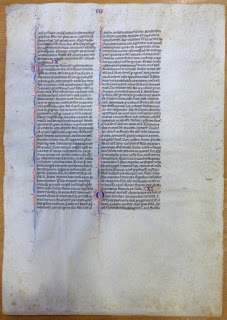 The style of illumination of this Bible is distinctive, but this last example shows that unilluminated leaves can also sometimes be tracked down, using just the country and century of origin, and height. (It is regrettable the that Schoenberg Database deliberately omits leaves and cuttings, while other databases that do include single leaves and cuttings, such as Digital Scriptorium and the British Library's catalogues, do not allow searches on features such as height or number of lines per page).

Here, for the time being, is the list of leaves known to me, with subjects of historiated initials in bold italics, prologues identified by their Stegmüller numbers ("S", the number marked with an "!" when it is not one of the normal Paris set), and links to catalogue descriptions (and in several cases also images):

I have also found an image with the historiated initial at the beginning of Ephesians (whereabouts unknown): 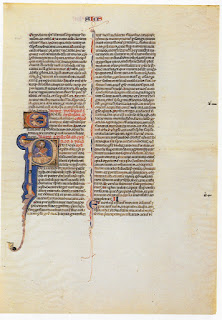