The Goodspeed Bible (I) 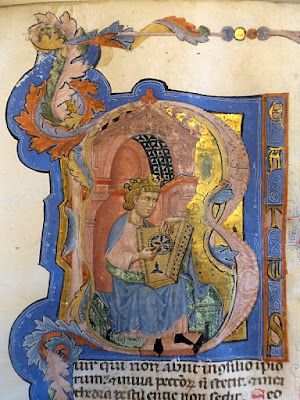 My fourth-ever blog post, back in December 2010, concerned a dismembered 14th-century Italian illuminated manuscript, which I named "The Goodspeed Bible" because it was apparently broken-up by Goodspeed's, the Boston bookshop, around 1935.

I was able to list five portions of the book, and a number of single leaves that were then being offered for sale by Pirages, and are now mostly at the Houghton Library. Not surprisingly, of the web-links I provided, only two still work: one is for a pair of leaves at the Rauner Library, Dartmouth College, and the other is for the whole book of Daniel which was sold at Christie's in 2003.

In that first blog post I used no images, and said very little about the manuscript, but it deserves more detailed treatment, which I will now give it, in part because I have located some more portions of the parent volume.

It is not yet clear how or where Goodspeed's acquired the Bible, but there is a chance that it was substantially complete: all the portions that I have seen are in good condition, but only the very beginning of the New testament has been found to date. Clearly Goodspeed's thought that the text leaves had negligible value and so, rather than just selling the illuminated leaves singly, they often bound up whole biblical books, so that customers could buy, for example, the whole of Daniel, Job, Maccabees, or whatever, consisting of an illuminated initial and the full text of the book.

The bindings are easily recognised: they are of blue-grey laid paper with three-quarter tan pigskin, and the title gilt on the spine: 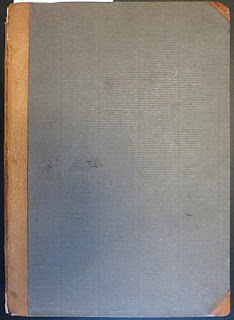 In the next few posts I will describe in more detail what is known about the Bible so far.
Posted by Peter Kidd at 07:18