An Addendum to the de Silva Library

I recently received a copy of a catalogue of incunabula offered by Sokol Books (link to full PDF), in which no. 33 is described as having the bookplate of Hercules de Silva (not reproduced in the catalogue).


A couple of years ago I wrote a long post about the library of Donato and Ecole de Silva, and so I suspected that the "bookplate" was in fact the ink-stamp discussed in that post.

An exchange of emails and a request for an image showed that the Sokol description was quite correct in describing it as a bookplate (shown above); and that it clearly refers to the same man who used the ink-stamp, as the heraldry is essentially the same: 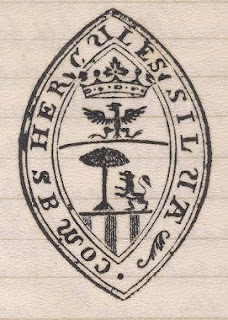 Turning back to the reference works cited in the original post, including Bertarelli, Gli ex libris italiani, I see that the bookplate is indeed described (no. 3):
I am dubious about the dates suggested by Bertarelli, however. The two ink-stamps are so similar that I would expect them to be close in date rather than "Circa 1715" (Donato) and "Circa 1785" (Ercole) as suggested. On the other hand, the ink-stamp and the bookplate of Ercole are so different from each other that I would expect them to be further apart in date than the "Circa 1785" that is suggested for both of them. I would have thought the bookplate to be 19th-century; Ercole would only have been about 19 years old in 1785, and I would guess it dates from somewhat closer to his death in 1840.