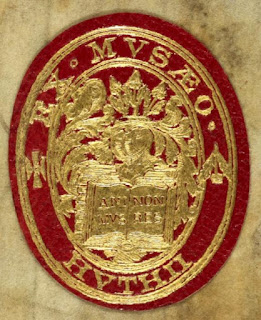 My previous two posts concern the provenance of an Apocalypse manuscript owned by Henry Huth. As with most books from the Huth library, it has an oval gilt leather bookplate like the one above, with the legend "EX MVSÆO | HVTHII".

Above this, an oval shape approximately 50×40mm, and vestiges of paper, show where another bookplate has been removed from the upper area of the front pastedown. 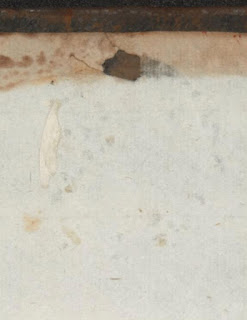 At first sight this suggests that Huth, or the bookseller from which he bought the manuscript, removed the bookplate of a previous owner. But de Ricci (English Collectors, 1930, p. 154) records that:


“Huth books are easily recognised by the oval book-plate pasted inside the upper cover of each volume. A little above this label will be observed in many volumes the trace of another book-plate, also oval and slightly larger, which he removed and replaced by the one he finally adopted.”

I think that de Ricci may be incorrect to suggest that Henry Huth made the change: I suspect that Henry Huth used a paper oval bookplate with his own name, and after inheriting the library, his son Alfred replaced it with the more generic gilt leather “Ex Musæo Huthii” bookplate, which does not name either of them specifically.

Several colours of leather were used, including red (above), brown, and white: 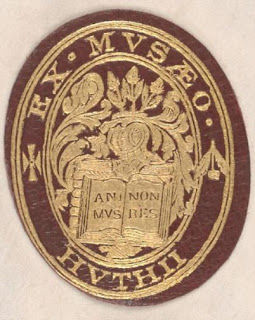 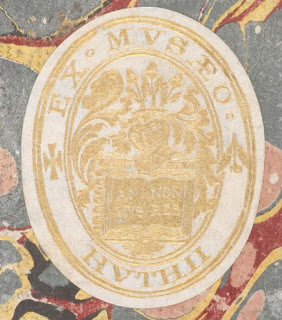 The use of the words “Ex Musæo” on a bookplate is quite unusual, but the phrase was also used by one of the greatest collectors of illuminated manuscripts, a contemporary of Henry and Alfred, whose bookplate reads “Ex Musæo Henrici Yates Thompson”: 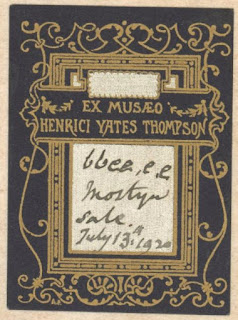 [For a explanation of the price-code used, see this post]

Most bookplates (including Yates Thompson's) and book-labels are printed on paper and are rectangular, so it seems possible that the wording, the oval shape, and the use of gilt leather of different colours by Henry and Alfred Huth were all inspired by the oval gilt leather bookplates of another famous book collector, discussed in a previous post: Paul Girardot de Prefond (1722–c.1785?):


Incidentally, this might be a good opportunity to explain the "MS. e Mus." shelfmark used at the Bodleian Library:


"In 1655 Thomas Barlow (Librarian 1652-60) formed the class in Musaeo, i.e. manuscripts kept in the cupboard in the Librarian's study. ... When the manuscripts were moved ... the name of the collection was changed to e Musaeo." [source]