For several years I have wondered to whom this bookplate belongs:
It occurs in a fine illuminated manuscript in New York Public Library; I have never seen it myself, but it is represented on Digital Scriptorium. Although the text does not state its title or name its author, it can be identified as John of Wales's Breviloquium de virtutibus, and has four fine large miniatures depicting female personifications of the virtues Justice, Prudence, Temperance, and Fortitude, attributed to the well-known illuminator Jean Colombe:

The most detailed study of the manuscript is by James Marrow, in The Splendor of the Word: Medieval and Renaissance Illuminated Manuscripts at the New York Public Library (London & Turnhout, 2005), no.97 pp.413–16, who describes the bookplate as follows:


"Unidentified seventeenth- or eighteenth- century engraved armorial bookplate on fly-leaf i verso (quarterly, argent, a lion rampant sable; gules, a chevron argent, surmounted by a ducal coronet [sic – this is usually the coronet of a count, not a duke])."

Browsing old sales catalogues, I recently came across a description identifying the bookplate as that of Girardot de Préfond, whose name is also stamped in gilt just above it:
Paul Girardot de Préfond is a somewhat shadowy figure. In Charles and Mary Elton, The Great Book-Collectors (London, 1893), pp.198–99, we read this attractive tale:


"Paul Girardot de Préfond was a timber-merchant who fell into an apathetic state on retiring from active business. His physician, Hyacinthe Baron, was an eminent book-collector, and he advised the patient to take up the task of forming a library. So successful was the prescription that the merchant became renowned during the next half century for his superb bindings, his specimens from Grolier's stores, and the Delphin and Variorum classics which he procured from the library of Gascq de la Lande. On two occasions the sale of his surplus treasures made an excitement for the literary world. Some of his rarest books were sold in 1757, and twelve years afterwards his Delphin series and the greater part of his general collection were purchased by Count Macarthy." 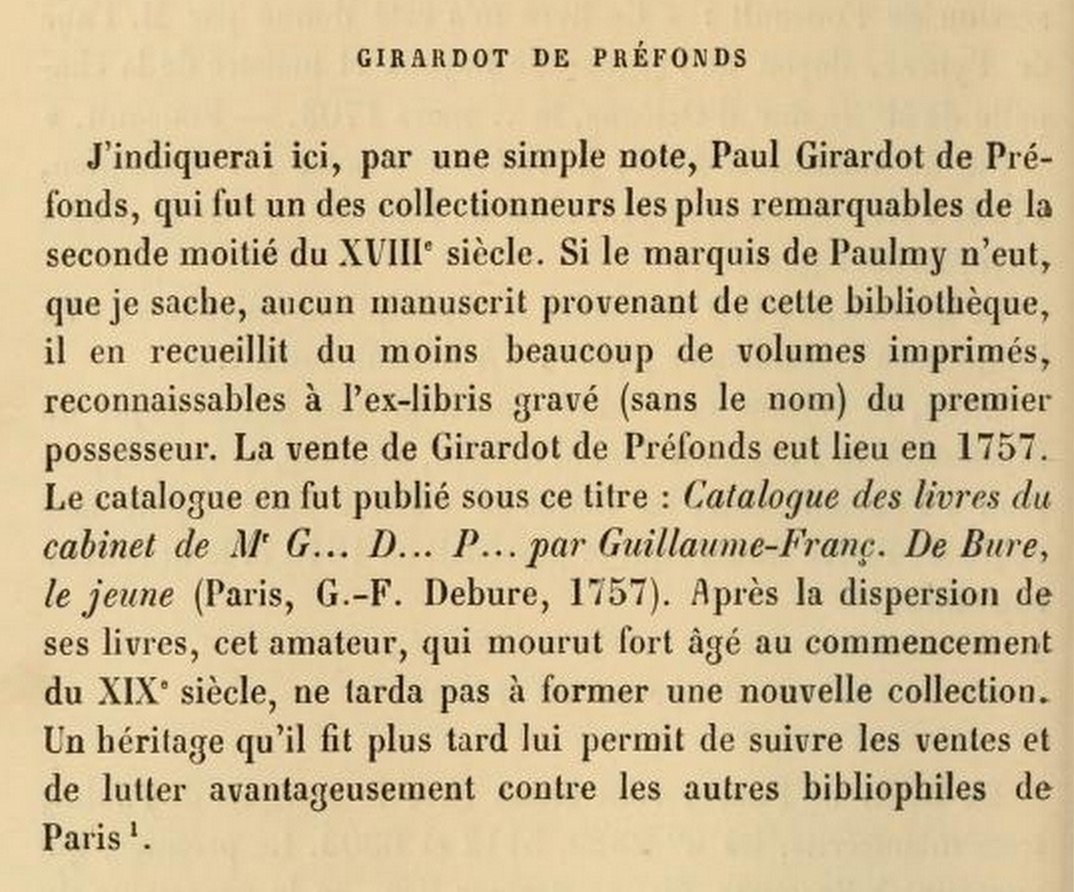 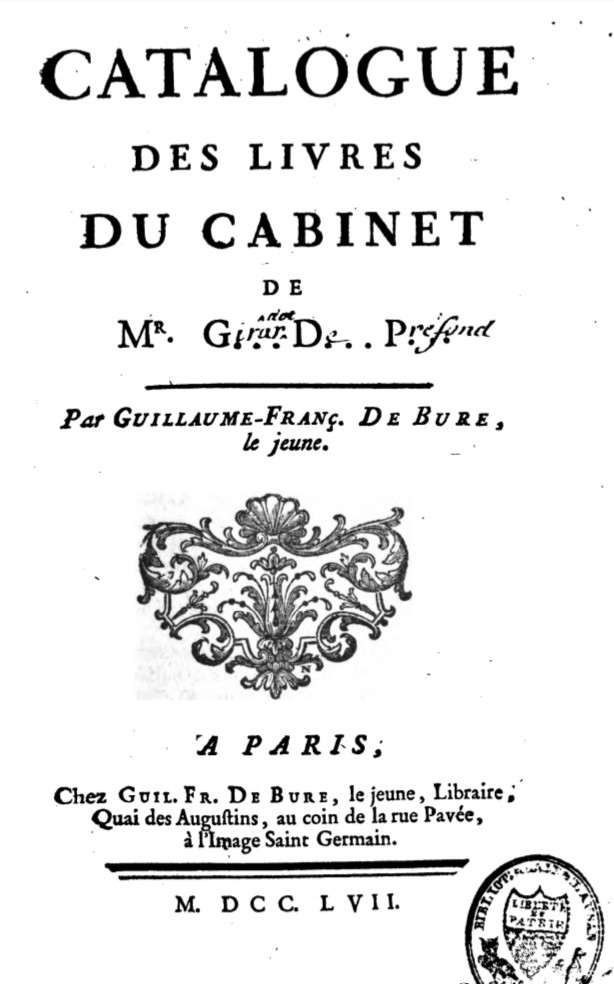 One annotated copy, in the New York Public Library, also has some interesting provenance of its own: 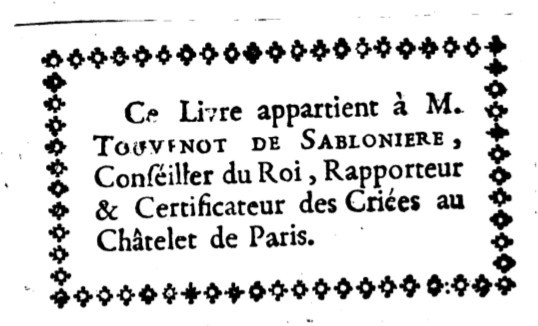 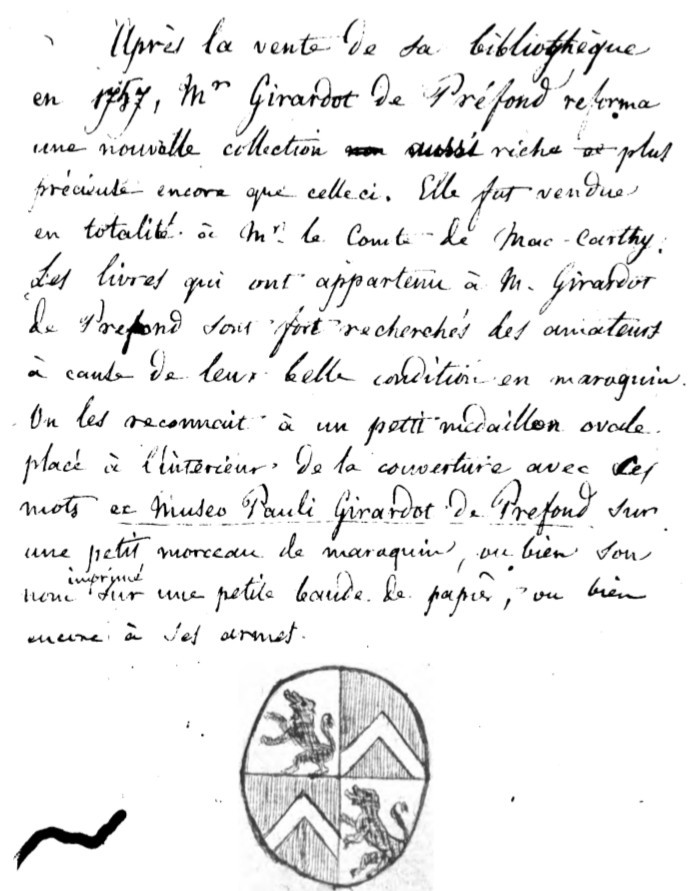 While the Bodleian copy, curiously, seems to have a second title-page bound in, which identifies the vendor explicitly, and has his arms as a pasted-in cutting from his bookplate: 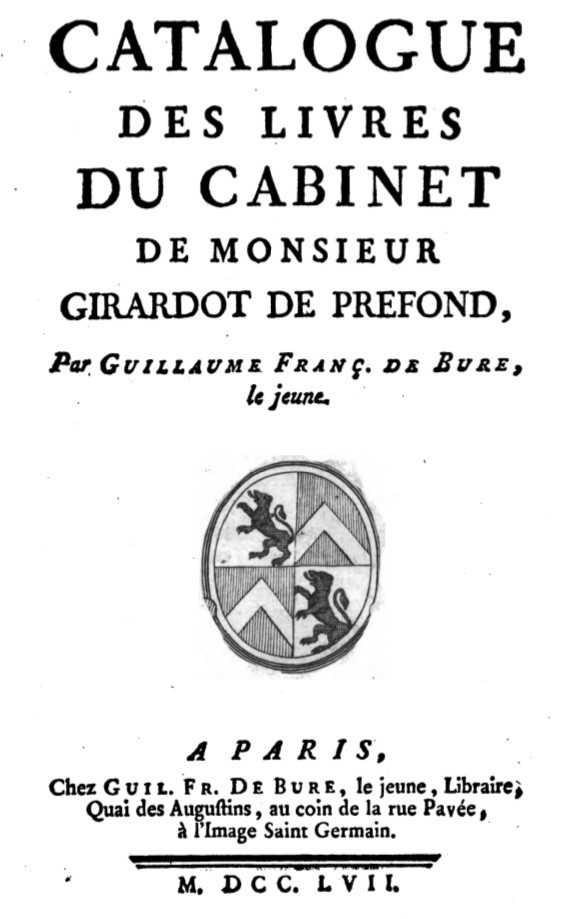 Returning to our John of Wales Breviloquium manuscript in New York Public Library: this must surely be lot 266 in the catalogue, which apparently sold for 7 livres, 19 sous:

... but note that not all copies of the catalogue are annotated with the same price:

"M. R." is an abbreviation for "Maroquin Rouge", and the title of the work given in the catalogue, "Traité des Vertus morales" corresponds nicely to Marrow's description of the binding:

According to the Ecole des chartes's account of the auction catalogue,

At least three more of the small number of manuscripts in the catalogue can be identified and, coincidentally, two of them are also now in New York:

Lot 42, a Book of Hours, described among several other books of Hours and Missals, can be identified by the fact that it is dated 1524; it is now Library of Congress, MS. 52 (Rosenwald 10/14), and was known by William Beckford, one of its later owners, as "Les Heures de Préfond" 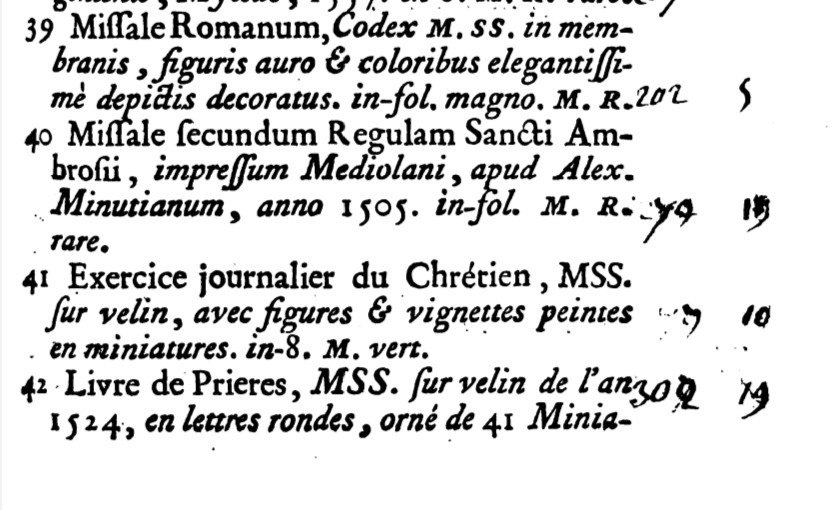 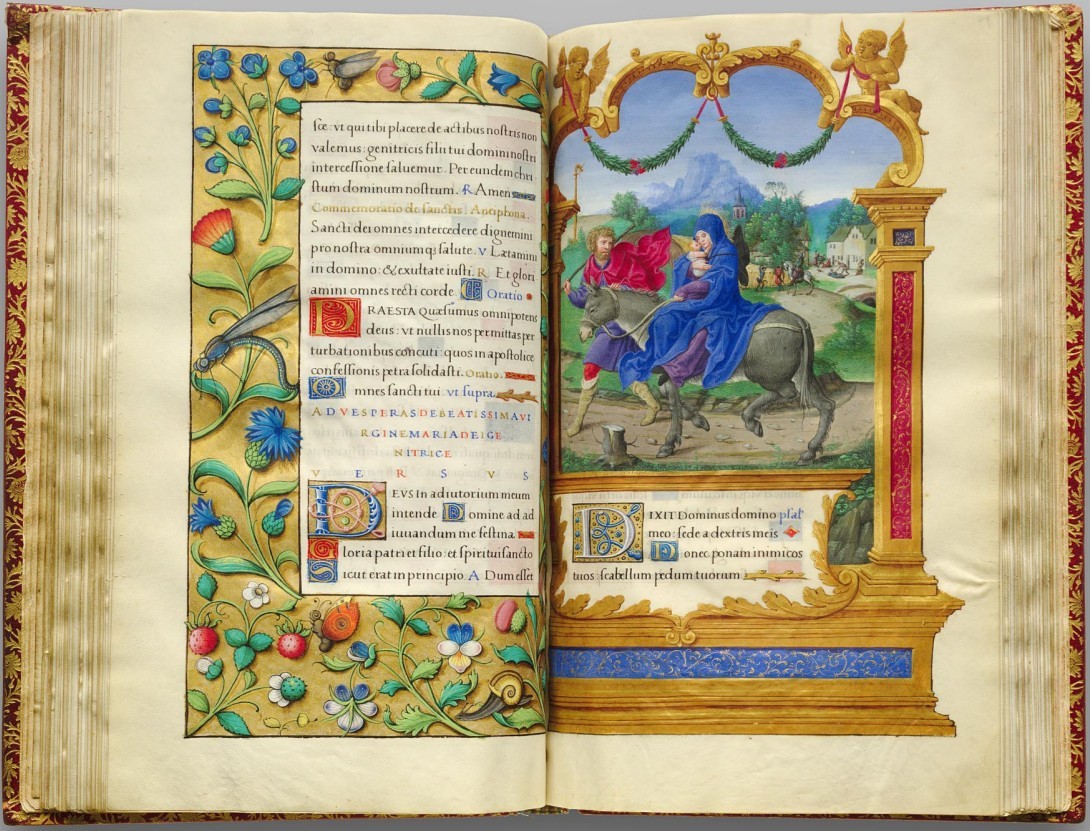 If any readers know of them, I would be interested to learn the whereabouts of Giradot de Prefond's other manuscripts from his first collection, sold in 1757. In addition to the Missals and other Books of Hours mentioned above, lots 39, 41, 43, and 44, here are a few of the items that should be identifiable:

EDIT, 13 July 2014.
Of little interest to me as a medievalist, but of great interest to Girardot de Préfond's contemporaries, was lot 483, La Rhetorique des dieux, mentioned above, of the mid 17th-century. In the 1757 catalogue it was one of the few manuscripts to get mentioned in the "Eclairissemens" at the beginning of the volume, and indeed it is described there at great length, beginning as follows: 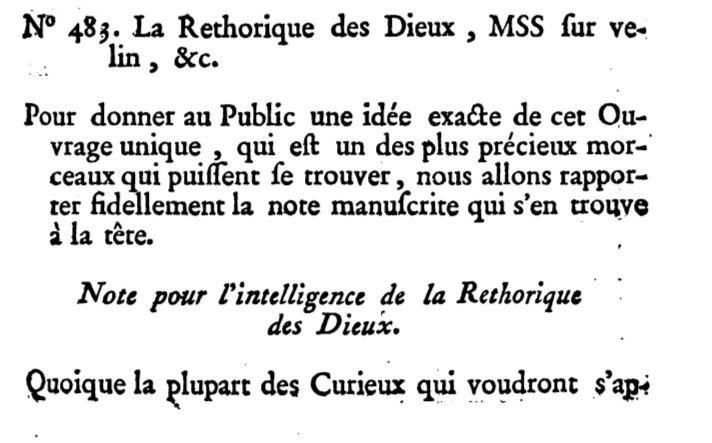 This manuscript is now Berlin, Preußischer Kulturbesitz, Kupferstichkabinett, MS 78.C.12, also sometimes known as the "Codex Hamilton", because it belonged to the Dukes of Hamilton (whose library incorporated that of William Beckford), whose manuscripts will be the subject of a future post.