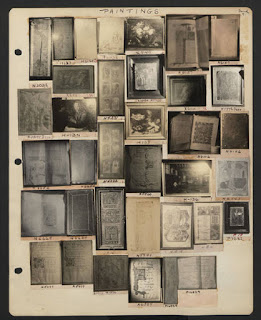 Last week we found an illuminated manuscript classified, because of its binding, under the heading "LEATHER". The image above is a page from the "PAINTINGS" section of one of the Brummer photobooks. At first sight it looks like a jumble, and it is, but taking the images one by one, several manuscripts can be recognised. I will look at some of them, in separate posts.

In the top row, at the far right, is a rather plain binding with the Inventory number N6107, and next to it the open volume: 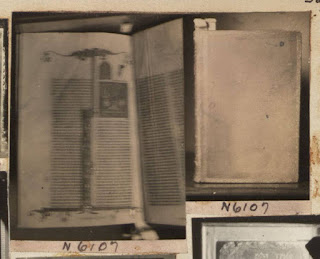 If we rotate the image so that it is the right way up: 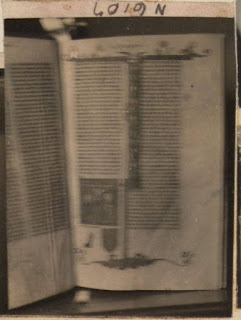 we can recognise it as a Bible, now at The Met:
In the space left by the scribe between the end of the prologues and the beginning of Genesis, the illuminator inserted a Crucifixion miniature and a kneeling figure: 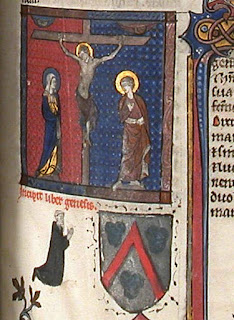 The figure was identified as a Dominican by Sotheby's in 1990, but as there is no visible sign of the distinctive white tunic, and as the black garment looks like a tunic not a cape, he is perhaps more likely to be a Benedictine: 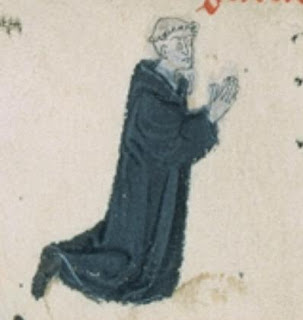 The heraldry, added later, is of the Budé family, some of whose manuscripts we have discussed in three previous posts.

The provenance recorded on the Met webpage is fairly extensive:

Of course I am glad that The Met includes so much provenance information (which could be derived with minimal effort from the 1990 auction catalogue), but there are several things I do not like about the way it is presented.

First, in the absence of any evidence, it records ownership by the President de Saint-André and the Jesuit Collège de Clermont as if they are facts. Some of Budé's books followed this route, but it is not known whether the present one did.

Second, it uses the convention of putting 'The Trade' (Brummer and Sotheby's, in this case) in square brackets; but it fails to realise that "William Permain" was not an individual, but a business (run by Thomas Permain), acting on behalf of Hearst (cf this blog post), and this nicely highlights the problem: the reader really do not need square brackets to indicate that "Brummer Gallery" and "Sotheby's" is not the name of a collector, and on the other hand it is often very difficult to know if a personal name represents a firm (e.g. Bernard Quaritch, Martin Breslauer), an individual dealer, or a private collector. And it is also usually impossible to know which items in a dealer's possession were part of their 'stock' and which were part of their 'private collection'. (It is sometimes joked that dealers' private collections are simply the things that they paid too much for, and cannot sell at a profit.) If the use of square brackets is intended to help the reader see which links in a provenance chain are The Trade, then it would be far more helpful to just be explicit, by using a short epithet, e.g. "Sotheby's, London auction house", "Brummer Gallery, New York art gallery", "William Permain, English agents for William Randolf Hearst".

Third, I personally find blocks of text like the one above very difficult to digest, which is why I prefer to put each new owner on a new line, as well as trying to provide epithets and further information, including details of how the manuscript passed from one owner to the next. If a provenance is lengthy, other typographic elements such as bullet-points or numbering, and selective use of bold font, can help the reader. Although it takes up more space, I think it is helpful to the reader to present a provenance more like this (although for such an important manuscript I would personally provide much more detail, and more bibliographical references):