Leaves from a 14th-Century Picard(?) Book of Hours

This historiated initial is on a leaf now at The Met in New York. It comes from a manuscript several of whose leaves have appeared in dealer and auction catalogues from about 1930 to 2001.

The earliest appearance of any leaves was in Gilhofer & Ranschburg, Luzern, Lager-Katalog XIX, Einzel-Miniaturen des XIII. bis XV. Jahrhunderts ... [undated, but probably 1929 or 1930] 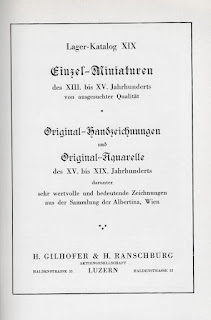 The leaves that I am aware of in auction and dealer catalogues are: 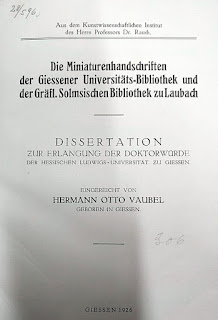 This catalogue not only provides a fairly detailed description, but also two extra reproductions, of John on Patmos and the Nativity: 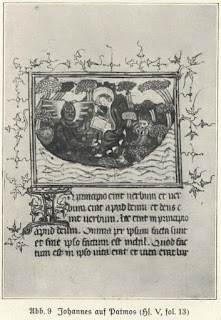 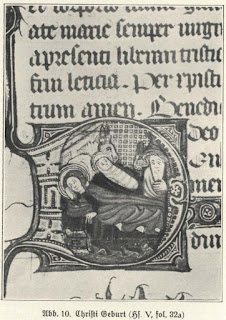 From the description we learn that it was a bound volume of 174 leaves including flyleaves, 22×17cm, with calendar scenes, 2 miniatures, and 14 historiated initials; the contents were as follows:
The catalogue also records three loose miniatures, but does not tell us what texts they accompany: one of the Gnadenstuhl Trinity, and two of the Virgin and Child; in one of the latter she holds a golden apple, and in the other she holds a banner with the words "Orate pro me mater dei memento mei". Perhaps one of the Virgin and Child images introduced Matins in the Hours of the Virgin and the other introduced a prayer such as the "Obsecro te", but it is very unusual that there were also two other initials and a miniature all depicting the Virgin and Child. Likewise, there seem to have been three images of Christ in Majesty.

We can only guess at the texts introduced by some of the other initials. The "D" with a Christ in Majest on fol. 53 might have been the prayer "Doulce dieu doulce pere saint Trinite ..." or "Domine Ihesu Christe qui septem verba die ultimo vite ...", and the Virgin and Child in a "D" on fol. 130 might have been "Doulce dame de misericorde mere de pite ..." or "Doulce dame saincte Marie ...". The leaves will doubtless reappear in due course and answer these questions.

As for the provenance, the calendar has an entry for every day, with relatively few red letter days, but they include St Quentin, of Amiens, and three feasts of St Eligius, bishop of Noyon and Tournai (who translated the relics of St Quentin in 641), which suggests an origin in Picardy.

The 1926 description tells us that fols. 1-3 and 171-174 were flyleaves, with an inscription "Bibliothec Arnsburg" on the first, indicating previous ownership by the Cistercian abbey at Arnsburg (secularised in 1802/3), just 5 miles south-west of Schloss Laubach, which housed the manuscript in 1926.

In the hope that readers may recognise text leaves from the volume, here is the verso of The Met leaf, which indicates what they look like:

Edit 9 Sept 2018
Looking through my harddrive images I found b&w images of the leaves sold at Sotheby's in 1981, so I have inserted the images above. From these we can see that the prayer in French described by the Sotheby's catalogue as "the Joys of the Virgin" is not the normal Quinze Joies.
Edit, 27 April 2021
I ahve realised that two leaves were offered in Gilhofer & Ranschburg, Catalogue 128 [1929], nos. 270 ("Anna and Maris in a mountainous landscape", i.e. The Visitation), 271 ("The Announcement to the Shepherds", pl. XVIII), and 284 ("The Presentation of the Child")
Posted by Peter Kidd at 08:57