The Duprat Bible [Part I]

The so-called "du Prat atelier" of 13th-century Parisian illuminators was named by Robert Branner after a luxurious large (c.440×320mm) Bible that is now in Boston Public Library (MS. f. Med. 104):
Parts of its recent provenance are well known, but thanks to images taken by Lisa Fagin Davis I have been able to fill in much of the gap between the 16th century and 1830.

The Bible is named for its earliest identified owner, Antoine Duprat (1463–1535), who became Chancellor of France in 1515, Archbishop of Sens in 1525, and cardinal in 1527: he had architectural borders and his arms added to the first page of each of the two volumes.
His arms include his Cardinal's hat, suggesting that he acquired it no earlier than 1527:
The arms can be compared with several examples in the Bibale database, including these, with and without the cardinals' hat:

Unfortunately the Bible cannot be confidently identified in the inventory of the Duprat libraries, at Paris and Nantouillet, drawn up in 1557 after the death of Cardinal Antoine's son, also called Antoine.

Manuscripts and printed books are often, but not always, described as such; here, for example, we see a Bible "escripte à la main" followed by an "impression de Paris", followed by three more books that could be either printed or manuscript:

It could be that the Bible is one of the items whose title is not provided in the inventory, and it would not be surprising if a Bible were the first item listed in the section of manuscripts:

It is thus not clear whether the manuscript had been given away or sold by this date: on one hand it seems unlikely that such a large and splendid Bible would be overlooked by those compiling the inventory, but on the other hand several other manuscripts certainly owned by the Duprats are also absent (e.g. BnF, mss. lat. 12216, fr. 5109, and n.a.f. 4119).

Later the Bible found its way into the library which was founded at the Chateau d'Anet by Diane de Poitiers (d. 1566), mistress of Henri II, and augmented by later owners. With the death in 1718 of Marie-Anne de Bourbon, dowager duchess of Vendôme, it passed to the House of Condé.
Books from the library at the Château d'Anet can be recognised by the the characteristic paraph on the first page of each volume (compare the examples on my website here and Jean-Luc Deuffic's here): 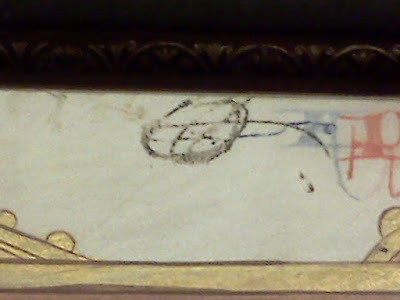 and number, in this case “quarante cinq”: 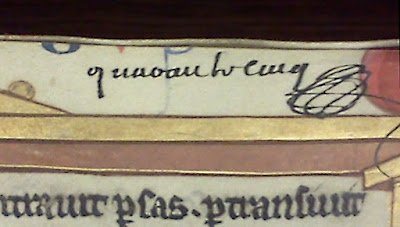 The Bible was sold with the rest of library after the death of Anne of Bavaria in 1723, still in two volumes, as the first (unnumbered) item of the 1724 auction catalogue: 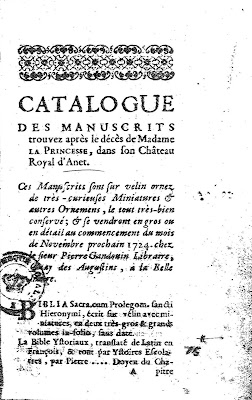 The subsequent provenance will be covered in a later post.
Posted by Peter Kidd at 11:01