The previous post left the Duprat Bible in the 1724 catalogue of the Château d'Anet.

Whoever bought the Bible divided each volume into two and rebound them in the present 18th-century bindings, for an unidentified owner, with a gilt “P L” (? or "L P" ?) monogram stamp in each corner: 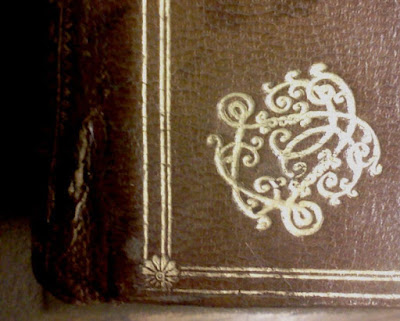 and on the spine:

The same monogram appears on the very similar binding of BL, Yates Thompson MS 49, also from the library at the Chateau d'Anet, but the attribution of the binding to Louis Léon-Félicité, duc de Brancas et comte de Lauraguais (1733-1824) in the BL catalogue description appears not to rest on a reliable source. Among the reasons for not believing this attribution are that the manuscript cannot be found in the sale catalogue of his collection, and that other books he owned are stamped with his arms, not with a monogram. The owner of this monogram is therefore currently a mystery, and I urge any reader who recognises it, to let me know.

The next signs of ownership of the Boston volumes are an 18th-century Continental dealer’s annotations in ink inside each rear cover, perhaps price-codes and prices: 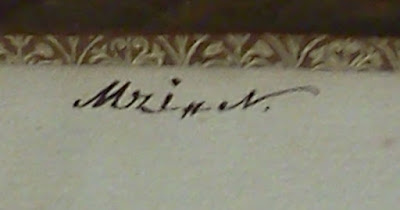 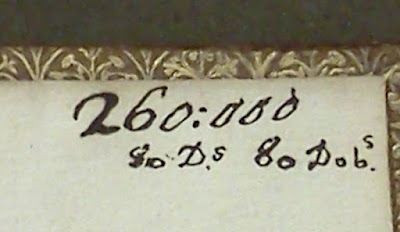 Then we reach another identifiable, but previously unrecognised, owner, José Antonio Conde y García (1766–1820), Librarian of the Royal Library, Madrid: the Bible was included in his sale by [Robert Harding] Evans, Catalogue of Rare, Curious, and Interesting Spanish Books, and a Few Miscellaneous Articles, Forming the Library of Don. J. Antonio Conde … Which will be Sold by Auction by Mr. Evans … July 6, and Four Following Days, 1824: 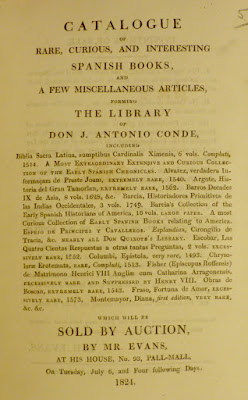 The Bible appears as the very last item in the catalogue, lot 970, and in Millar's description of the Bible in his catalogue of Chester Beatty manuscripts (vol.II, p.48), he states “there is an old number 970 on a label at the bottom of the backs”. It was bought by Thorpe for £31 10s: 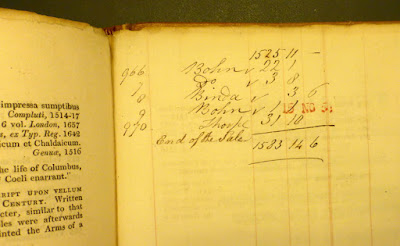 Thomas Thorpe, the London book dealer, included it in his catalogue for 1824, part III, just a few months later: 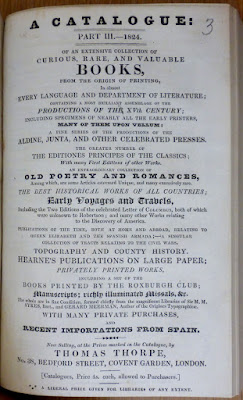 This number is in pencil on the verso of the first front flyleaf (the pastedown and facing page are marbled), and in the top left corner the purchase-price, £31 10s, in Thorpe's price-code: "ng/go/-": 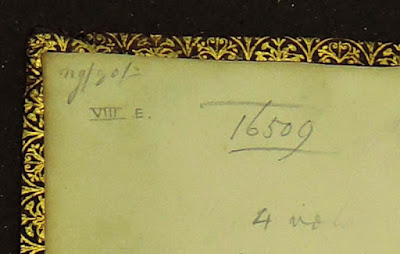 This expensive book may have remained in Thorpe's stock for several years, because when it next appears, in the catalogue of Sir Thomas Phillipps (1792–1872), it follows a group of manuscripts that he bought no earlier than 1830:

It is interesting to note that Phillipps was able to discern the difference in date between the original manuscript and the added decoration, which had misled both Evans and Thorpe into dating the manuscript to the late 14th or 15th century.

Phillipps inscribed the flyleaves of the volumes in the usual way: 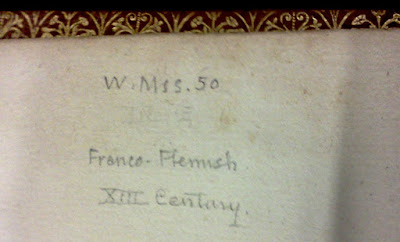 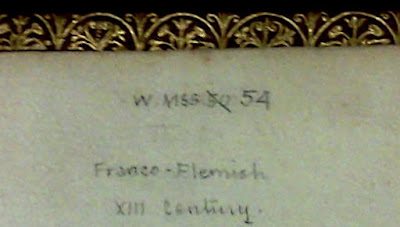 Chester Beatty included the Bible in his sale at Sotheby’s, June 7, 1932, lot 13, where it was bought for £600 by Quaritch, who inscribed the first volume  “635” in a rectangle on a front flyleaf of each volume (as discussed in a recent post): 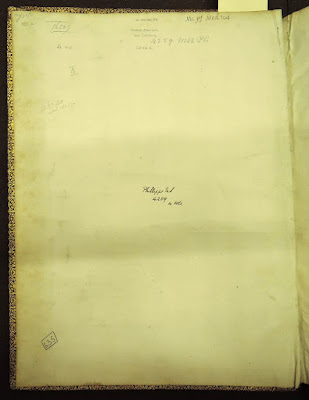 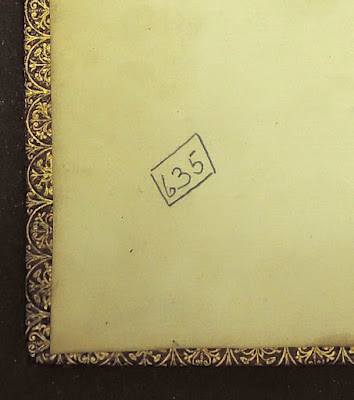 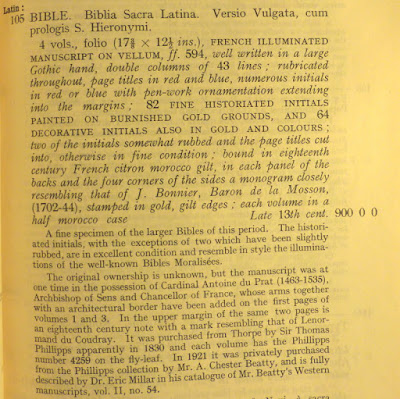 When Quaritch offered it again, in Catalogue 637 (1946), as item 588, it was still priced £900, but the front cover had a note that American clients should pay in dollars, and within the catalogue an exchange-rate of £1=$4 was used: 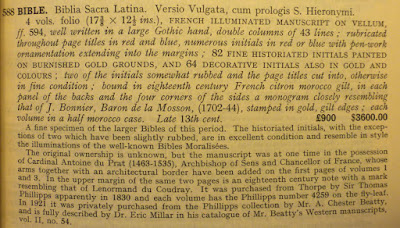 Perhaps buoyed-up by the end of the War and the fact that the exchange-rate was so good (in 1936 a pound sterling had been worth almost $5), it was bought in 1946 by Boston Public Library to become their MS. 1532:

and subsequently re-referenced as MS. pf. Med. 104 (corresponding to the number assigned to it in Bond & Faye's Supplement to de Ricci's Census):

All four volumes of the Bible are due to be exhibited at "Pages from the Past", the major exhibition of medieval manuscripts from Boston-area collections that will take place from September to December 2016.
Posted by Peter Kidd at 10:51