Leaves from one of the manuscripts dispersed by Otto Ege which are most easily recognised are from a Cistercian Missal, long thought to be French or Spanish. A group of four including this leaf, for example: 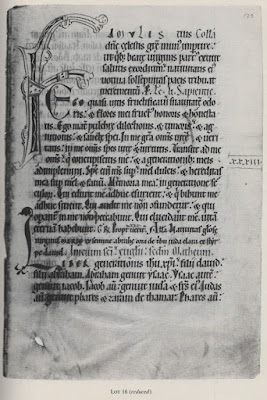 At some point between cataloguing the above item and the publication of the 1989 catalogue of manuscripts in New Zealand, to which he contributed, Christopher de Hamel recognised the parent manuscript in a 1948 auction catalogue, and re-attributed it to Austria on the basis of a reproduction of its figurative decoration: 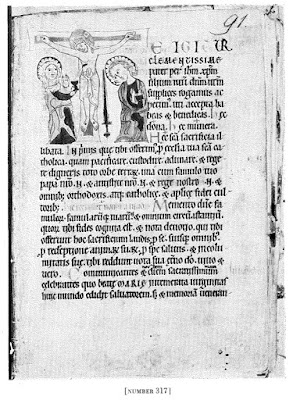 The 1948 catalogue has a brief description: 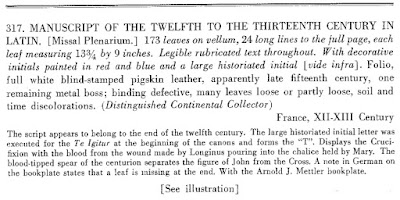 and its provenance is recorded as Arnold Mettler, of St Gall, whose bookplate appears in many of the manuscripts in the catalogue: 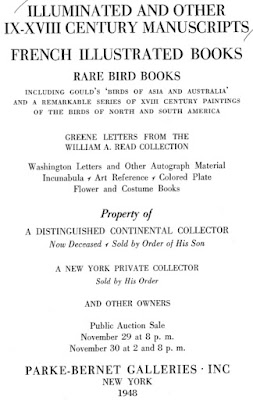 In fact, the manuscript is recognisable in an earlier auction catalogue, with a much more detailed description: 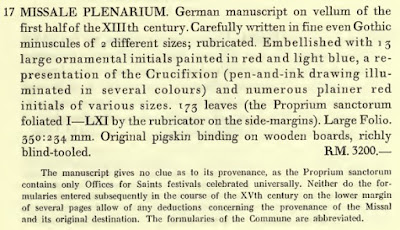 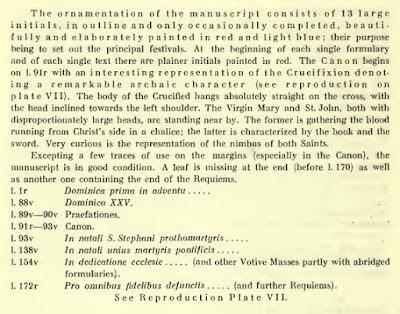 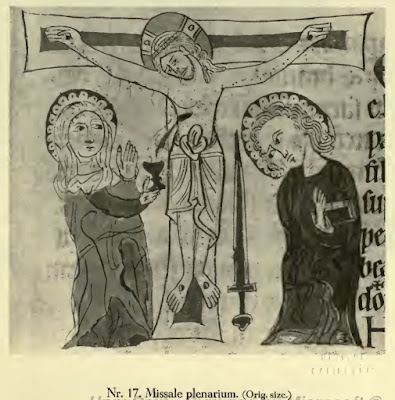 This catalogue is undated: 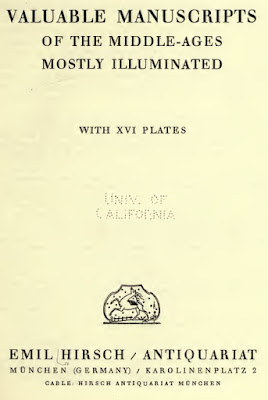 and is given various differing dates in library catalogues. The earliest date I have found is in the Warburg Library catalogue, where it is assigned to [1928], and the Schoenberg database gives it a surprisingly precise date in the same year: 22 August 1928, even though it is a dealer catalogue, not an auction catalogue. Perhaps this is the date their copy was accessioned.

The discovery of this catalogue description perhaps does not help us pin down the origin of the manuscript more precisely. It is suggestive, but probably no more than a coincidence, that Hirsch owned two other manuscripts now at the British Library, both from Cistercian houses in southern Germany or Austria: Hirsch III.606, of unknown precise provenance, and Hirsch III.943, which may have been written in 1191 for the Abbey of Wilhering, a little west of Linz, and was later at the Cistercian abbey of Hohenfurt in Southern Bohemia, now Vyšší Brod in the Czech Republic, a little north of Linz.