A Dispersed Album of Illuminated Cuttings [II]: The Collector(s) Identified


Christopher de Hamel has kindly contacted me about a previous post. He points out that a leaf from a Book of Hours in the Reed collection at Dunedin (shown above) is also from the same album, with the same characteristic handwritten captions.

In the 1989 catalogue of manuscripts in New Zealand he records that the leaf had been bought from "H.G. Commin (i.e. A.G. Thomas), cat. 149 (1959) no. 117". (In fact Alan Thomas had sold the H.G. Commin bookshop a few years earlier and set up a new business at home, issuing his first catalogue in his own name in 1957). But more importantly, he suggests that the leaf comes "from a pair of albums of cuttings assembled in the late nineteenth century by John William Bradley, manuscript historian. They belonged later to W. Charles Fewtrell and were sold at Sotheby's, 10 November 1952, lot 22 (to Edwards):

Here is the 1952 description in full, followed by a partial transcription: 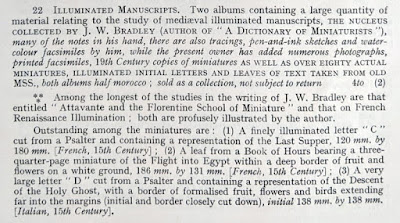 22   ILLUMINATED MANUSCRIPTS. Two albums containing a large quantity of material relating to the study of medieval illuminated manuscripts, THE NUCLEUS COLLECTED BY J. W. BRADLEY (AUTHOR OF “A DICTIONARY OF MINIATURISTS”), many of the notes in his hand, there are also tracings, pen-and-ink sketches and water-colour facsimiles by him, while the present owner has added numerous photographs, printed facsimiles, 19th Century copies of miniatures AS WELL AS OVER EIGHTY ACTUAL MINIATURES, ILLUMINATED INITIAL LETTERS AND LEAVES OF TEXT TAKEN FROM OLD MSS., both albums half morocco; sold as a collection, not subject to return 4to (2)

This description suggests that J. W. Bradley collected the "nucleus" of the contents of the two albums, and the medieval leaves and cuttings were added by "the present owner", Fewtrell. Christopher, in contrast, suggests that the "albums of cuttings [were] assembled in the late nineteenth century by John William Bradley", which is certainly possible, but if so, I suspect that the paper mounts and handwritten captions were added by Fewtrell, as the handwriting looks to me likely to be later than 1916, when Bradley died. The Grolier Club, New York, has a collection of Bradley material, including notebooks written by him, and there is another notebook at Senate House Library, London, so in due course it will be possible to check his handwriting.

The Sotheby's description continues by describing three items, and although the New Zealand catalogue does not mention this, the second of the three is presumably the leaf in Dunedin (the dimensions are the same to within a couple of mm.): 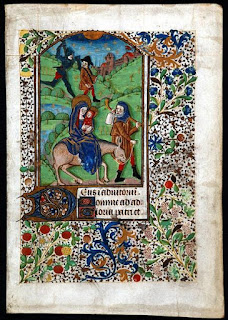 I have been able to find out surprisingly little about the vendor, "W. Charles Fewtrell, Esq.". The Sotheby's 1952 sale has 35 lots of his property, all relating to manuscripts, including general reference words such as Saunders's English Illumination, Durrieu's La miniature flamande, and Humphreys's The Illuminated Manuscripts of the Middle Ages, and monographs such as Gough on the Bedford Missal, Cockerell on the Gorleston Psalter, and Millar on the Luttrell Psalter.

The University of Toronto has a copy of Henry Shaw, Alphabets numerals and devices of the Middle Ages (London, 1845), that was lot 30 in the 1952 Sotheby's sale (as proven by the fact that both descriptions transcribe an inscription "All the coloured plates in this copy of the Alphabets are more highly finished than any offered for sale"). The Toronto description additionally reports: "With the hand-illuminated signature: W. Charles Fewtrell, Liverpool". We now know where he lived.

Fewtrell was presumably still alive in 1952, as the Sotheby's catalogue does not describe him as "the late", nor does it say the property belonged to his estate or heirs. Fortunately for us, his surname is very uncommon. One of very few men named Fewtrell recorded in official birth/marriage/death records, whose forenames began with W and C, was a William C. Fewtrell who died in Liverpool, aged 92, at the end of 1959 or beginning of 1960. He would therefore have been born about 1868. A William Charles Fewtrell is recorded as being born in 1868 at Much Wenlock, Shropshire, about 70 miles south of Liverpool. He is perhaps also the William Charles Fewtrell who was married at Eton in 1892, when he would have been aged about 24. The 1901 national census records him living in the Toxteth area of Liverpool, and the 1911 census shows that he had moved just a few hundred yards, into the adjacent Wavertree neighbourhood.

Beyond these basic genealogical details he does not seem to have left a very visible historical footprint, but we are nonetheless a few steps closer to understanding the interesting collection of illuminations, which once included the previously-reported examples in the Boston Public Library and elsewhere.

Postscript
Since writing the above paragraphs I have been in touch with Julian Smith, Rare Books and Special Collections Librarian at Dunedin Public Libraries, and he has kindly sent me a scan of the inscriptions that were on the paper mount of their leaf (from which it was separated many years ago, probably for conservation reasons).

The handwriting is certainly the same, with the distinctive descenders to h and other letters:

What is especially interesting is that (unlike the others previously identified) this particular leaf is attributed to Bradley's former ownership:

This (i) confirms that the inscriptions are not by Bradley himself, (ii) strongly suggests that the collection does indeed correspond to that sold by Sotheby's in 1952, and (iii) suggests that the previously-identified leaves and cuttings from this album which do not have a note like this, did not come from Bradley's collection. This seems to confirm the assertiuon in the 1952 catalogue, which says that the nucleus of the material comes from Bradley, but that it was extensively supplemented with medieval miniatures by Fewtrell.

If most of the medieval cuttings and leaves in the two albums were collected by Fewtrell, he may have acquired them in Liverpool, and they may perhaps have previously been owned by 19th-century Liverpool collectors such as those discussed by Edward Morris, ‘Early Nineteenth-Century Liverpool Collectors of Late Medieval Illuminated Manuscripts’, in The Making of the Middle Ages: Liverpool Essays, ed. by M. Costambeys et al. (Liverpool, 2007), pp. 158–87: men like William Roscoe, who acquired illuminated cuttings from his London friend William Young Ottley; Joseph Brooks Yates, grandfather of Henry Yates Thompson; the slave-trader Sir John Tobin, perhaps most famous for having owned codices including the Bedford Hours, the Isabella Breviary, and the Hours of Joanna of Castile (but also the owner of single miniatures such as sublime calendar miniatures by Simon Bening); and the much less well known Charles Blundell (a relative of Thomas Weld-Blundell, owner of the Luttrell Psalter), whose family tried to prove after his death that he had been insane because he bequeathed his fortune to the Catholic Church.
Posted by Peter Kidd at 09:22