A Dispersed Album of Illuminated Cuttings


An exchange on Twitter this week caused me to look again at the online images of single leaves at cuttings at the Boston Public Library, and it reminded me that they have the item shown above: a cutting of an illuminated manuscript on parchment, inset into a paper mount, which was presumably either fol. 38 in a bound volume or no. 38 in a portfolio of loose leaves. The number appears in the upper right corner: 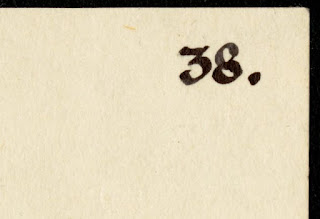 It is written in black ink with a broad-nibbed pen, doubtless by the same person who wrote an attribution above the cutting:

and a description below it:

It is distinctive handwriting, with serifs on many ascenders (d, h, l) and final minims (a, i, l, n, u), and an especially angular "h", with a final stroke which descends well below the line:

The BPL acquired the cutting from Maggs Bros in 1957, and in the lower right corner is the distinctive Maggs price-code (of which another example is reproduced in this post):

We can see the reverse of the cutting, thanks to the way in which it is window-mounted: 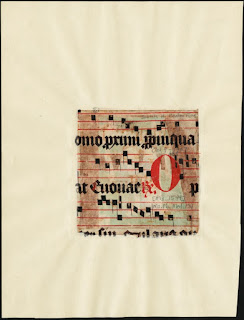 It includes what is presumably the exact accession- or acquisition-date, in pencil:

A couple of years ago I gave a talk at the Houghton Library in which I showed how Boston-area leaves and cuttings can often be better understood by tracing their sister leaves. I observed that the BPL cutting above has a sibling, mounted in exactly the same way, which was sold by Christie's in 2015:

Hopefully the following details will convince you that the inscriptions are by the same person, with the same sort of number in the upper right corner: 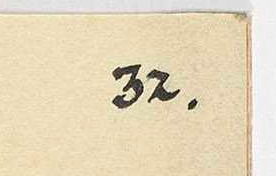 and inscriptions of the same form, in the same handwriting:

including the distinctive angular "h":

The reverse of this cutting has one of the well-known inscriptions (as discussed in this post) claiming that it comes from the cathedral at Como (but in fact many of them are more likely to come from Cremona):

This provides some potentially valuable provenance information, both medieval and 19th-century, because it links it to an important group of cuttings, many of which were in the collection of William Young Ottley [Wikipedia], sold in 1838. This cutting might be the first of the five that formed lot 149 in his sale: "A group of saints":

I later found what I think must be another cutting from the same album. It was sold at Christie's South Kensington, 18 June 2013, lot 8. Despite the fact that it is in a carved wood frame, not inset into a sheet of paper like the other two: 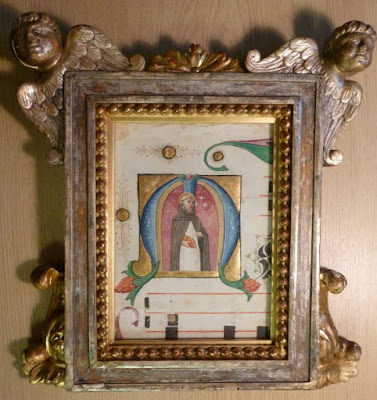 the inscription stuck to the back appears to have been cut from a larger sheet of paper:

written by the same person:

(Incidentally, I blogged recently about the value of consulting hardcopy catalogues and not just the online ones; this is a case which demonstrates the sort of things you can miss by not attending auction viewings in person: for perfectly understandable reasons, the printed and online catalogues do not describe, or even mention, the inscription on the back.)

Can we locate any more cuttings from this interesting album of illuminated cuttings?

Looking at the description of the Boston cutting (BPL pb. Med. 174) shown at the very top of this blog post, in the Supplement to de Ricci's Census, I noticed that it is described as "Mounted in folder". (This is slightly counter-intuitive to me, as I would not call a single flat sheet a "folder"). The next item in the catalogue is also a cutting, also "Mounted in folder", also acquired in the same year, from the same source 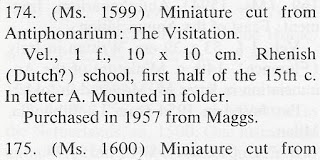 Turning to images of the latter online, I find that it is now neither mounted in a "folder", nor in a sheet of paper like the other Boston cutting:
but the description records that it once was, and it was inscribed "37", just as MS pb. Med. 174 is numbered "38":


Provenance: No. 37 in dealer's hand on vellum sheet [1], probably the leaf's number in the dealer's portfolio, as on BPL pb. Med. 174. Same dealer's handwritten description [2] on the vellum sheet reads "Flemish or Dutch: late xv century/ Initial "A," showing Aaron (with censer) and Moses before the Almighty; also, the plagues of locusts and of frogs. [Exodus, chaps. viii & x.]"


The cutting that has been framed in a giltwood frame (from which a later owner might very likely remove it), and this last example, demonstrate just how vulnerable provenance evidence can be. This applies especially to "modern" provenance evidence, such as 20th-century inscriptions, which professional conservators and preservation staff do not always think worthy of preserving. (In another post I noted with some disquiet that the Free Library, Philadelphia, discarded mounts with unrecoverable provenance information as recently as 2002).

I do not yet know who formed the album of cuttings, but it must have been a significant collection, as we know it contained at least 38 items, possibly many more. Hopefully this blogpost will result in more cuttings from the album being recognised, and we may eventually be able to work out when, where, and by whom it was assembled. We may also be able to determine when it was dispersed.

EDIT: 25 March 2020
Richard Linenthal has kindly contacted me to say that he has a leaf of an incunable that comes from the same collection; here are the inscriptions on the mount, in the now-familiar handwriting:

EDIT 3 May 2020
I have found one more, in the Comites Latentes Collection, Switzerland: 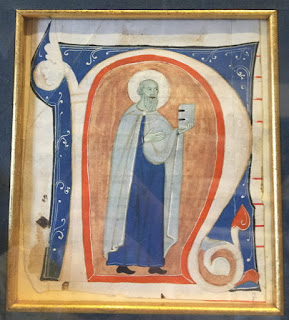 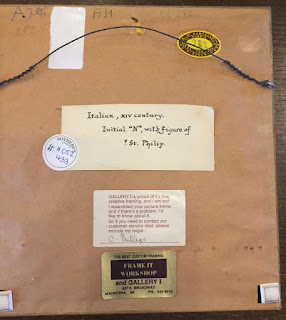 [1] I strongly suspect that "vellum" is a typo for "paper" in this description: the descriptions on which the online catalogue is based describe a "vellum sheet" for both MS pb. Med. 174 and MS pb. Med. 175; but the former is clearly paper, so it is likely that the latter was, too.

[2] I am confident that the ink inscriptions were written by a private collector, not a dealer.
Posted by Peter Kidd at 08:03