A Curious Cutting at the Chazen

Last summer Maria Saffiotti Dale, Curator at the Chazen Museum of Art, sent me just the sort of provenance puzzle I enjoy. It concerned a 15th-century Italian cutting, shown above, described on the Chazen website as an "Initial 'D' from an Antiphonary from Como Cathedral with a Temple". [1]

On the back is an inscription which she could not entirely read: "I can make out all the inscriptions EXCEPT the initials(?) immediately preceding the date 1856 and what follows it. Any ideas?"

Here is a the photo of the reverse she sent me: 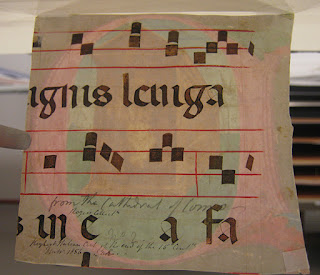 and here is a slightly enhanced close-up of the inscriptions:

It is easy enough to read, in pencil:

followed by the problematic line:

The phrase "from the Cathedral of Como" is well known to anyone who works with Italian cuttings, including Maria, who wrote that the Chazen example is "one of the Rogers cuttings purportedly from Como Cathedral (but most likely Cremona)".

Here is an example from the Free Library, Philadelphia:
Here is one at the Getty Museum:
And several more are recorded (but the inscriptions not reproduced), in one of the Lehman collection catalogues available online from The Met (as mentioned in the previous post):

A Google search on "cutting" and "from the Cathedral of Como" produces a number of further hits at the British Library, Fitzwilliam Museum, and elsewhere, including the online catalogue of the Beyond Words exhibition. [2]

Occasionally a slight variant occurs, as in this detail from a cutting sold by Christie's in 2015:

Many of the cuttings with the "Como" inscription can be traced back to the Ottley sale in 1838, which has been mentioned in various previous posts (e.g. here and here), and the catalogue specifically mentions this provenance for a considerable number of individual cuttings:

It seems most likely that the Chazen initial was part of lot 74 or 149, one of the "Letters without figures".

With the inscription mentioning the "Rogers Collection" and the year "1856", it was a simple matter to identify the Chazen cutting in the 1856 sale catalogue of the poet, banker, and art collector Samuel Rogers (1763-1855): 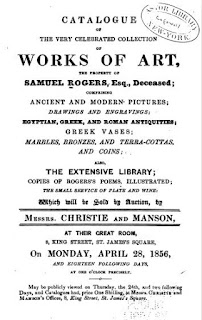 It must surely be the second item in lot 989: 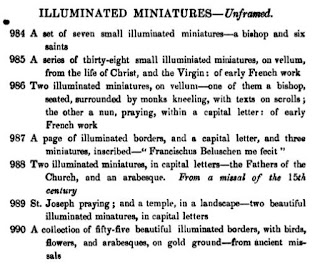 "989  St. Joseph praying; and a temple, in a landscape—two beautiful illuminated miniatures, in capital letters"

The Chazen's description of the initial's subject as "a temple" may have originally been derived from this source, but I think it is probably incorrect.

The surviving text on the back of the cutting is enough to allow identification; it must come from the first versicle for Sexagesima Sunday: 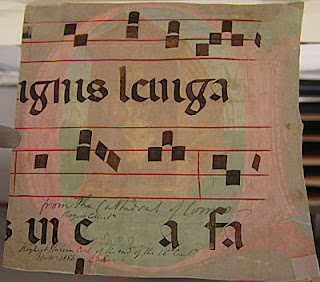 This strongly suggests that this text is on the verso, and the illuminated initial is the recto, the "D" being the first letter of the first response of the same day: "Dixit dominus ad Noe ...".

The subject-matter of both texts suggest that the "temple" depicted in the initial is in fact Noah's Ark. I haven't found a precise 15th-century Italian equivalent, but the form of the structure is very like this 16th-century drawing, with a single small, high, window at one gable-end: 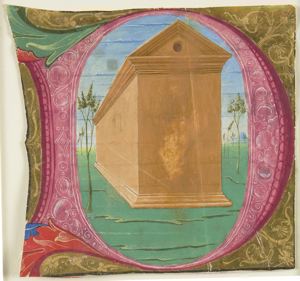 This is all good and well, but does not answer Maria's original question, concerning the final line of the inscription on the reverse of the cutting. Here is a close-up:

At first I thought that the bit before the year 1856 might be an abbreviation for a month, such as "Nov[em]b[e]r", but a couple of months later I found closely comparable inscriptions on the back of a series of Bible historiale cuttings at the Free Library, Philadelphia (here and here), including these: 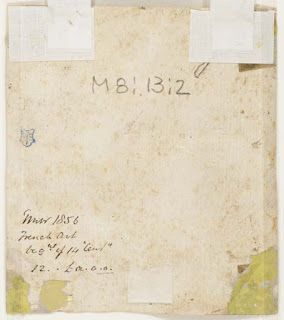 These not only confirm that the author of these notes writes "£" and a price-code (in this case "£a.o.o"), but the bit before the year "1856" now looks much less like a month, and more like a personal name, perhaps beginning with a "T" and ending with "er", such as "Turner", or perhaps three initials, such as "TMW".

This last reading proved to be correct: a search of Lugt's Marques online led me to Thomas Miller Whitehead (1821-1897):

So in addition to providing a bit more provenance for the Chazen cutting, we have also found some for the Free Library's Bible historiale cuttings.


[1] The cutting was included in a 2011 exhibition, for which there is an accompanying PDF guide, available here.